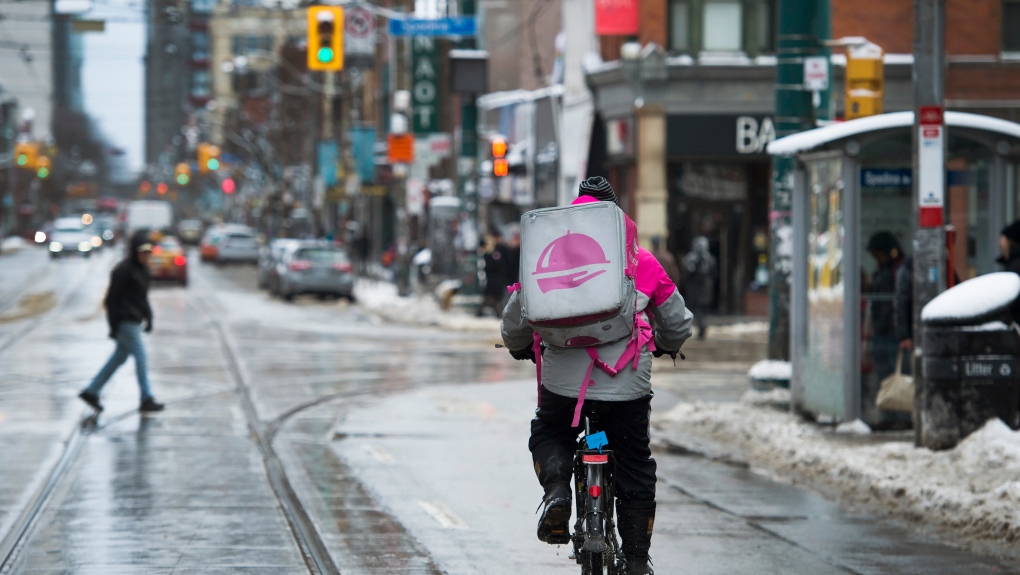 A Foodora courier is pictured as they pick up an order for delivery from a restaurant in Toronto, Thursday, Feb. 27, 2020. (THE CANADIAN PRESS / Nathan Denette)

TORONTO -- Food delivery app Foodora is closing its Canadian operations in May, just months after a key labour board decision laid the groundwork for the company's workers to push for unionization.

The subsidiary of Berlin-based Delivery Hero SE said Monday that it has not been able to reach a level of profitability in Canada that's sustainable enough to continue operations, so it filed a notice of intention and will exit the country on May 11.

"We're faced with strong competition in the Canadian market, and operate a business that requires a high volume of transactions to turn a profit," said David Albert, Foodora Canada's managing director, in a release.

"We've been unable to get to a position which would allow us to continue to operate without having to continually absorb losses."

Foodora has operated in 10 Canadian cities over the last five years and has racked up 3,000 restaurants on the platform, even in a "highly-saturated market" with stiff competition from Uber Eats, SkipTheDishes and DoorDash.

The announcement was a blow for couriers who have been busy dealing with surges in orders amid COVID-19 and grappling with new policies around no-contact delivery.

"It's devastating," said Jennifer Scott, who has worked as a Foodora bike courier for two-and-a-half years in Toronto.

"We are in the midst of a global pandemic and this job is how we make a living wage. It's how we survive, and it's just gone, which is very scary for many of us."

She expects she will be able to make up her Foodora losses with work from Uber Eats and DoorDash, which she already does deliveries for, but isn't sure others will be so lucky.

Before the closure, couriers were already fretting because they don't qualify for some of the federal government's recently-announced relief measures, she said.

"I've been a courier a long time and I've been able to figure out how to make it work for me no matter what's going on...but I'm not so certain about many of my co-workers who are only working for Foodora, Scott said.

The shutdown news was extra tough for couriers like Scott because they had been part of Foodsters United, which had long been fighting for rights and protections for Foodora couriers and other gig economy workers.

They alleged that the company was using the independent contractor model to avoid giving workers health and safety supports.

Foodsters wanted fair compensation for the work completed by couriers because it said the pay-per-order model meant that during slow periods workers receive wages lower than minimum wage, while still covering costs like gas, phones and vehicle or bike repairs.

Foodora long boasted about its app offering flexibility so people just trying to earn some extra cash or between jobs could easily make money, but Foodora workers said that flexibility bred instability and left them with little protection.

Foodsters garnered attention in February following an Ontario Labour Relations Board ruling that decided Foodora couriers are dependent contractors of the food-delivery company because they more closely resemble employees than independent contractors.

The ruling was considered a massive hurdle to clear that could have helped the couriers unionize and give growing numbers of gig economy workers the inspiration to follow suit.

Jan Simpson, the national president of the Canadian Union of Postal Workers, called the two-weeks' notice that has been provided to Foodora workers "grossly unfair and unreasonable" and said the union was reviewing its legal options.

"Foodora and Delivery Hero must be held accountable to the workers," said Simpson, in an email to The Canadian Press. "Couriers have made millions for this company and deserve to be treated with dignity and fairness. In the middle of the COVID-19 pandemic, they are considering numbers over human lives."

"There's no way that this could be fruitless," she said. "The win that we celebrated at the labour board is precedent setting and has the ability to pave the way for other workers in other gig economy type jobs to begin the unionization process."

Meanwhile, Foodora said it is working on devising a proposal to provide additional help to employees and other creditors.

Albert said, "I thank them for the continued support over the last five years. Supporting them during this transition phase is our main priority."

This report by The Canadian Press was first published April 27, 2020.