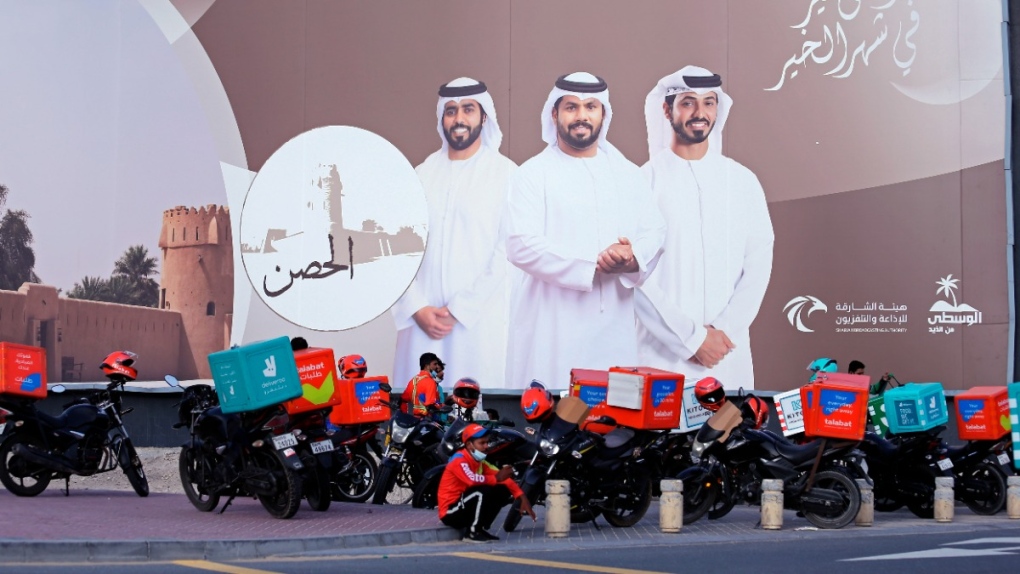 Food-delivery workers protesting meagre pay and inadequate protections have walked off the job across Dubai, their company confirmed Tuesday, marking the second strike in as many weeks in an emirate that outlaws dissent.

As fuel prices surge, many said they were pressing for a modest pay increase from their current rate of US$2.04 per delivery -- a wage less than what sparked another extremely rare strike among contractors for delivery service Deliveroo last week.

Deliveroo drivers now make $2.79 per delivery after the walkout forced the U.K.-based company to backtrack on its plans to slash workers' pay and extend their hours. Strikes and unions remain illegal in the United Arab Emirates, where the subject of labor standards has grown contentious in recent years.

Videos shared on social media showed scores of Talabat riders gathering in lots beside their parked motorcycles at dawn. It was not clear how many riders took part in the strike, which caused Talabat to acknowledge some "operational delays" on Tuesday.

Talabat, owned by Germany-based Delivery Hero, confirmed the work stoppage in a statement to The Associated Press, saying the company was "committed to ensuring riders can continue to rely on our platform to provide for their families."

"Up until last week rider pay satisfaction was well above 70%," the company added, without disclosing how it came to that number. "Yet, we understand economic and political realities are changing constantly, and we will always continue to listen to what riders have to say."

Several striking Talabat riders say they hoped to secure a raise to roughly $2.72 per delivery, especially as they're squeezed by spiking gas prices that they pay out of pocket. Many drive some 300-400 kilometres (190-250 miles) a day.

Riders also described a mountain of other costs draining their salaries, including visa fees to contractors who secured them jobs in Dubai, toll charges, regular motorcycle maintenance costs like oil changes and hospital expenses. Contractors do not provide drivers with adequate accident insurance, drivers say, even as many frequently crash on Dubai's dangerous roads.

That leaves delivery workers, part of Dubai's vast foreign work force mainly from Africa and Asian countries such as India and Pakistan, with little cash to pay rent and send back home to families they support.

As it seeks to burnish its image as a cosmopolitan haven for expat workers, the UAE has faced persistent criticism from human rights groups over the long hours, tough conditions and relatively low pay endured by the country's manual labourers. Strikes over pay disputes have occurred sporadically in the past, although workers face deportation and prosecution for outbursts of dissent.

Authorities say the country has made labour reforms and offers many workers better money than they would find amid poverty, and sometimes conflict, back home.

"The full extent of the damage to the labour market has not been reckoned with," said Ryan Bohl, a senior Middle East analyst for U.S. risk intelligence firm RANE. "Striking workers know they can't be quickly replaced."

Khan, a 24-year-old Talabat driver and breadwinner for his family of nine in Peshawar, Pakistan, said he can barely make ends meet in Dubai -- even though he hasn't taken a day off in three months and works 15 hours a day. He has been struck by cars twice and injured his foot on the job, he said, but could never afford to get treatment.

"I'm not striking for me or for my friends. I know it's not good for us," he said, asking that he only be identified by his family name for fear of reprisals. "It's for the future. For guys like us, coming here to Dubai."