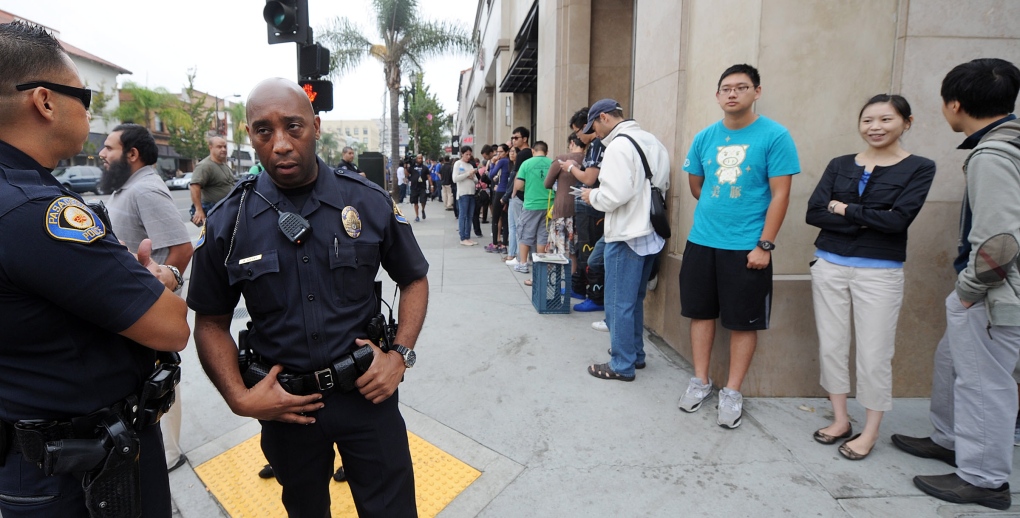 Long lines of people waiting to purchase new iPhones at Apple Store in Pasadena Friday, Sept. 20, 2013. Police detained three people after a fight erupted outside Apple Store,where a crowd waited overnight for release of the new iPhone. The fight was over homeless people who were promised $40 and didn't get paid, to wait overnight to purchase iPhones for a buyer.(AP / Walt Mancini)

PASADENA, Calif. -- An overnight campout for the new iPhone turned chaotic Friday morning when two men were arrested for fighting outside an Apple Store and a man's plan to hire homeless people to wait in line for the coveted devices backfired, authorities said.

Dozens of people recruited at a downtown Los Angeles homeless shelter to buy iPhones in bulk at a Pasadena store were left unpaid, and they mobbed the man who had hired them, Pasadena police Lt. Jason Clawson said.

One of the homeless men was placed on a 72-hour mental health hold after running into the street in an enraged state, Clawson said. Television news footage showed police breaking up several scuffles and calming down furious customers.

Dominoe Moody, 43, told the Los Angeles Times he was driven the 10 miles (16 kilometres) or so to Pasadena from Los Angeles with several vanloads of people to wait in line overnight.

Moody was promised $40 but said he wasn't paid because after handing the man an iPhone, the man was escorted away by police when people became angry with him.

"It didn't go right. I stood out here all night," Moody told the newspaper, adding that he has no way to get back to Los Angeles.

The would-be entrepreneur, whose name was not released, was clutching a single bag stuffed with iPhones when he was escorted into a police cruiser and driven away at around 9:30 a.m.

The man was not cited because he did nothing illegal, Clawson said. Police were not investigating the incident, he said.

Most of the people recruited to wait in line weren't paid by the man, Moody said, estimating that the man brought 70 to 80 people to the store.

In a separate incident hours earlier at the same store, two men were arrested after getting into a fistfight while in line.

No significant injuries were reported.

Police estimated that at least 200 people were on the sidewalk outside the store overnight. Some had been there for several days. The store hired two Pasadena police officers to control the crowd, Clawson said.