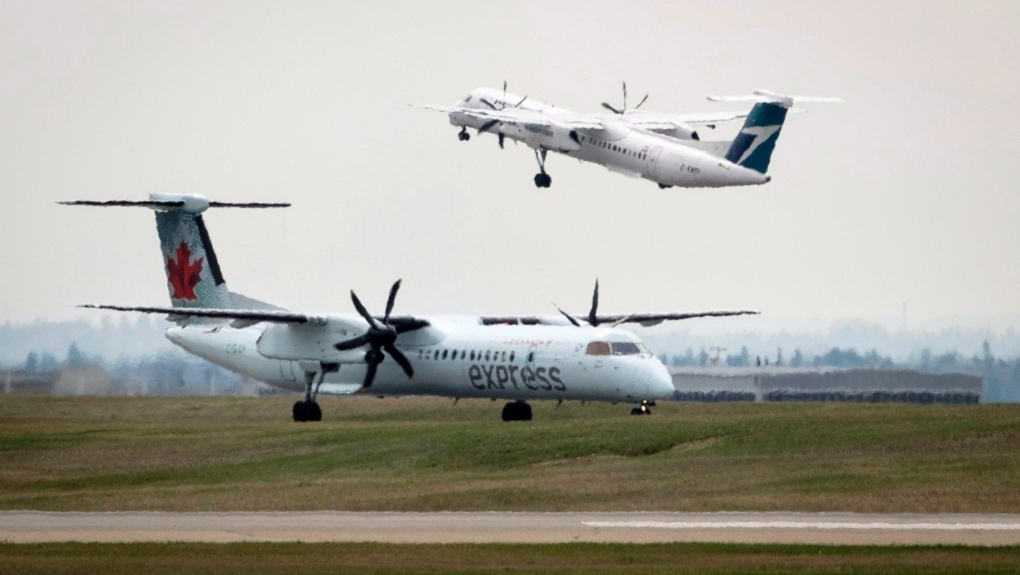 A WestJet plane passes over an Air Canada plane at the Calgary Airport in Calgary, Alta., Thursday, May 10, 2018. (THE CANADIAN PRESS / Jeff McIntosh)

MONTREAL -- Swedish may not be the lingua franca of the aviation world, but ask any airline executive about the term "flygskam" and they'll likely know exactly what it means.

"It does seem like a switch has flipped," says airline expert Seth Kaplan.

"For a while, there was this very incremental recognition of the urgency (of climate change), and then over the past year or so all this has really gotten into the spotlight -- aided by Greta Thunberg."

The Swedish teenage activist, who travelled by racing yacht to a climate summit in New York to avoid flying and its attendant emissions, has focused attention on aviation's role in global warming, with consequences for travel companies.

The CEO of SAS, one of Scandinavia's largest carriers, has attributed declining passenger numbers in Sweden to flight shaming. Meanwhile the country's main train operator, SJ, said it sold 1.5 million more tickets in 2018 than the previous year, thanks to what's been dubbed the "Greta effect."

Other European countries are experiencing the same phenomenon. Germany saw a similar decline in domestic flights in 2018, along with a corresponding increase in rail travel.

To combat this trend, airlines are turning to carbon offsets, where they invest in projects such as wind farms and tree planting to compensate for plane-produced carbon dioxide.

Such measures could cost airlines billions, Citigroup Inc. said in a research note last October. The banking conglomerate forecasts that carbon offsetting economy-class flights will cost US$3.8 billion per year within five years.

Carriers could absorb the expense or pass it along to consumers via a higher ticket price, but airlines will struggle in the long run if increased costs deter travellers from flying, Citi said.

If airlines foot the bill themselves, "the cost of carbon offsetting all leisure consumption could be as much as 27 per cent of airlines' profits by 2025," wrote analyst Mark Manduca.

Offsetting corporate travel -- which Citi defined as business-class seats -- will cost another $2.4 billion, reducing airline profits by a further 17 per cent, the report said.

Commercial aviation accounts for about two per cent of global carbon emissions -- a far smaller share than that of cars (estimates range between about 15 per cent and 20 per cent) or coal-generated power (30 per cent). "But it emits carbon in a very visible way," Kaplan said.

"You look up in the sky and you see airplanes flying."

In Europe, where the European Commission has called for a climate-neutral Europe by 2050, airlines have taken big steps in response.

EasyJet announced in November it would begin to offset emissions immediately, a move that they claim makes them the first major airline to operate net-zero carbon flights.

British Airways followed suit and began offsetting all flights within the United Kingdom as of Jan. 1

New York-based JetBlue unveiled plans to go carbon-neutral on all domestic flights starting in July, the first major U.S. carrier to do so.

Canadian airlines have also made efforts to reduce their carbon footprints, albeit less ambitious ones than their European counterparts.

"Using fuel-efficient aircraft is our best hedge against rising fuel costs and improves our carbon footprint," WestJet Airlines Ltd. spokeswoman Lauren Stewart said in an email. "We are proud to have one of the youngest and most fuel-efficient fleets in North America."

Other efforts by the airline include more fuel-efficient aircraft and biofuel investment, said spokesman Peter Fitzpatrick.

However, the proliferation of budget carriers and a robust tourism sector is resulting in more emissions even as aircraft become increasingly fuel efficient.

A recent study by the International Council on Clean Transportation found that airplane emissions are increasing as much as 50 per cent faster than forecast by the United Nations, whose aviation body predicts aircraft fuel consumption will more than double by 2045.

Europe's keen awareness and aggressive efforts around climate change may justify a little "tagskryt" -- "train-boasting" in Swedish -- but travellers on a densely populated continent have a built-in advantage.

"There's no high-speed rail network here like there is in Europe. The cities are not as closely located as they are in Europe or in Japan. And if I have to go to meetings in Montreal or the West Coast of the United States, flying is my only option due to time and cost concerns," said Brandon Graver, the Washington D.C.-based airline researcher behind the clean transportation council study.

A lack of investment in high-speed rail by governments in North America is also to blame, experts say, with flights between Montreal and Toronto more appealing in the absence of bullet trains.

Even if Canadian airlines were to proclaim carbon neutrality, its effectiveness remains up in the air.

"There's been a lot of talk lately that, 'Look, it's nice to go and plant trees, but it's not truly a one-for-one offset -- that there's not enough tree-planting in the world you could do to truly offset the impact of emissions,"' airline expert Kaplan said.

Nor do carbon offsets address the issue of fossil fuel dependence, according to a recent paper by the David Suzuki Foundation and the Pembina Institute.

"It's not the silver bullet ... to reducing their emissions, but it's one option of many -- while others would call them modern-day indulgences where you're paying for your sins," Graver said.

"We're hopeful that industry and governments together can come together and come up with a climate goal, an actual action that is beyond just lip service."