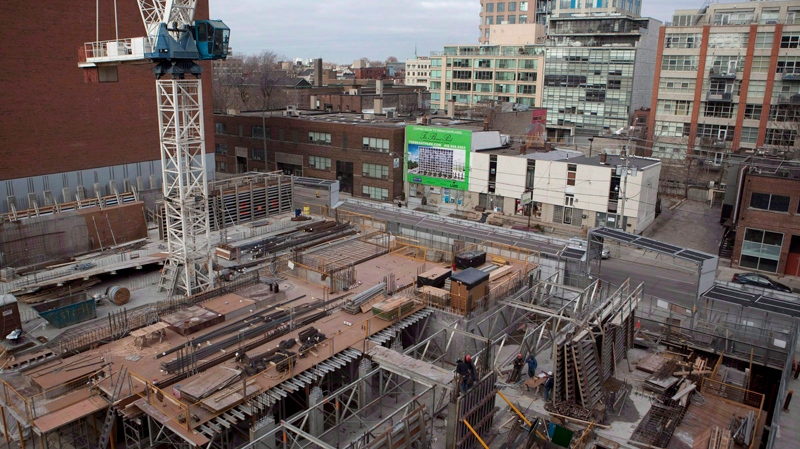 A condominium under construction is shown in Toronto in this file photo taken on Saturday, February 4, 2012. (THE CANADIAN PRESS / Pawel Dwulit)

OTTAWA -- Some economists warn that the surge in the number of new homes being built in Canada is unsustainable and could approach "worrying" levels if interest rates remain at the current level.

Canada Mortgage and Housing Corp. reported Monday that housing starts increased to a seasonally adjusted annual pace of 200,098 in July, a slight increase from 198,665 in June.

Gains in urban starts were concentrated in Ontario and Atlantic Canada. The Prairie provinces and Quebec all recorded declines and there were also modest decreases in British Columbia.

According to analysis from TD Economics, builders are taking cues from the current housing market, which is riding high on lower interest rates and solid growth in resale prices.

"This level of activity is unsustainable over the near term, on account of an already moderate level of overbuilding as well as the likely gradual increase in interest rates," says TD economist Jonathan Bendiner.

The Bank of Canada's overnight rate has been set at one per cent since September 2010.

The results coincide with Statistics Canada's report last week that a paltry 200 jobs were added to the economy last month, raising questions as to what's really driving the demand for new housing.

Demand for housing is strong among the 25 to 35-year-old demographic, counters BMO senior economist Benjamin Reitzes.

Young people are increasingly moving to provinces that offer better prospects for employment, driving up demand for housing in a few key provinces, he adds.

However, if building continues at the current pace, it might be difficult to absorb all the units that are currently under construction, says Reitzes.

"We're not quite at that worrying stage yet but it's something to keep an eye on."

The federal agency says the overall increase came as the pace of urban starts "was essentially stable" at 182,932 units. Multiple urban starts in July decreased to 115,870 units while the single-detached urban starts segment increased to 67,062 units.

Rural starts were estimated at a seasonally adjusted annual rate of 17,166 compared with 16,206 in June.