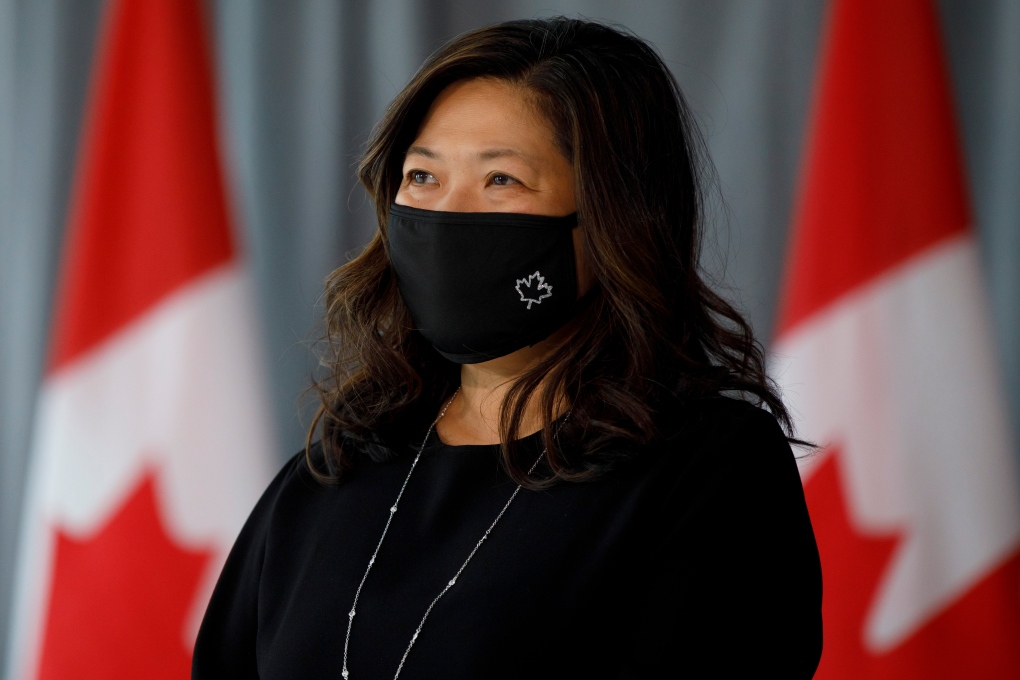 Minister of International Trade, Small Business and Export Promotion Mary Ng looks on during a press conference to unveil plans for greater support for Black businesses, at HXOUSE in Toronto, Wednesday, Sept. 9, 2020. (THE CANADIAN PRESS/Cole Burston)

OTTAWA -- Canada and Britain say they are in the final stages of negotiating a new trade deal before a Dec. 31 deadline.

That would prevent Canadian products from seafood to steaks and autos from being slapped with new tariffs when Britain leaves the European Union.

The spokeswoman for Trade Minister Mary Ng says Canada is hard at work on an interim agreement with Britain to replace the pact with the European Union that currently covers trade between the two countries.

"We understand that time is short. That's why Canada is at the table, working hard to get a good agreement to ensure continuity, predictability and stability for Canadian businesses, exporters, and workers," Youmy Han said in a statement to The Canadian Press.

"A deal is within reach and we continue to work with the U.K. to move this forward."

Britain's decision to leave the EU after its Brexit referendum means that the Comprehensive Economic and Trade Agreement, or CETA, will no longer apply to the country at the end of the year.

Han said Canada is seeking "a transitional agreement based on CETA as an interim measure once the Brexit period ends" but that government negotiators won't finalize anything "that isn't the best deal possible for Canadians."

A spokesman for Britain's international trade department said it is committed to "seeking to secure a continuity trade deal with Canada before the end of the (Brexit) transition period, and trade talks are at an advanced stage and progressing well."

Trevor Kennedy, the policy director of the Business Council of Canada, said Britain remains a key European trading partner for Canada, and if a new deal isn't reached Canadian firms will lose out on the market access they secured under CETA.

Japan and South Korea have already rolled over their old EU trade deals with Britain, while Australia, New Zealand and the U.S. are working on new agreements, Kennedy told the House of Commons trade committee this week.

"Some of these talks appear to be advanced and if (they) are in place without a transitional deal for Canada, it could result in Canadian firms losing their market share and first-mover advantage that we secured under CETA."

Mark Agnew, the international policy director for the Canadian Chamber of Commerce, said that without a new bilateral deal tariffs of at least 10 per cent on Canadian exports such as lobster, beef and autos would kick in on Jan. 1, 2021.

"The short answer is that Brexit matters for Canadian businesses," Agnew told the trade committee.

Canada's trade negotiators have amassed vast experience meeting tight deadlines and overcoming late-breaking obstacles in landing trade deals other than CETA. Canada risked being frozen out of a new North American trade pact in 2019 after the U.S. and Mexico reached their own agreement, forcing Canada to scramble.

Canada also engaged in some tough 11th-hour talks with Japan and others in 2018 to finalize the 11-country Pacific Rim deal known as the Comprehensive and Progressive Agreement for Trans-Pacific Partnership. That negotiation was thrown into flux after President Donald Trump pulled the U.S. out of the deal in 2017, which left Canada and the 10 remaining countries to find a way to repair their pact without the world's largest economy as a member.

Britain, meanwhile, has for decades deferred its trade negotiation work to EU officials in Brussels. The British have had to build a new trade department since the country voted in its June 2016 referendum to leave the EU.

Britain formally left at the end of January but the two parties have lived under an 11-month transition period, which for Canada has meant CETA continued to apply to its trade relations with Britain.

In the meantime, Britain has been forced to negotiate a series of new trade agreements with the EU and others, under the cloud of the COVID-19 pandemic.

Steve Verheul, Canada's chief trade negotiator, told the Commons trade committee in early November that talks with Britain ramped up this past summer.

"We think we're fairly close to the finish line, but we're not quite there," Verheul said. "As you can imagine, in any kind of trade negotiation, the most difficult parts are the ones you deal with at the very end."

Canada's approach was to import as much of the existing CETA pact as possible into a new bilateral agreement.

"A lot of the issues were very easy, but there are a handful of issues where we do have to have actual negotiations to reach a landing zone," Verheul said.

Verheul said one sticking point was working out the specific levels of market access for various Canadian products. Another revolved around "issues related to temporary entry of business people for business purposes."

This report by The Canadian Press was first published Nov. 19, 2020.