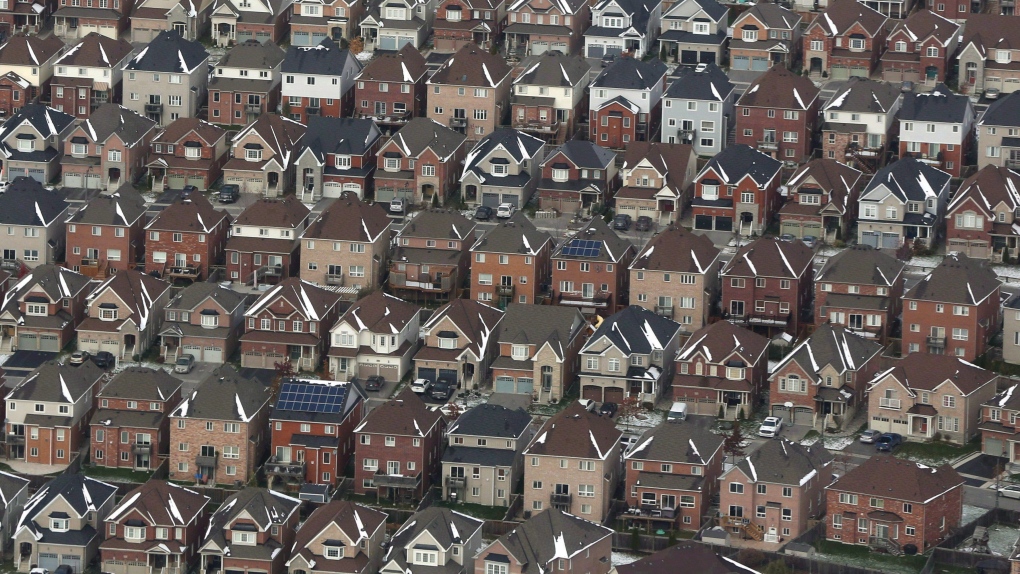 An aerial view of houses in Oshawa, Ont. is shown on Saturday, Nov. 11, 2017. THE CANADIAN PRESS/Lars Hagberg

A new report shows that rent for all property types across Canada jumped again, seeing an increase of 15.4 per cent over this time last year.

According to a monthly report from Rentals.ca, an apartment listings website, the average monthly rent of all property types in Canada was $2,043 per month in September.

This means there was 4.3 per cent increase month over month in what landlords are expecting tenants to pay, based on listings posted on the site, and a 21.9 per cent increase from the recent market low set in April of 2021. Compared with the pre-pandemic peak in the fall of 2019, the average rent is now $100 higher per month.

When it comes to the average rent of property by type, single-family homes were renting for $3,014 per month in September, 12.1 per cent higher than last year at the same time, based on Rentals.ca's data. Likewise, rent per square foot was $1.62 in September 2021, while it was recorded as $1.70 in September this year.

The report found that there was a $171 (7.7 per cent) increase in rental rates for condo apartments, and an increase of five cents per square foot, in Canada, on average. Traditional rental apartments also saw a year-over-year increase of 11.8 per cent, and renters of these units are now paying $2.46 on a per-square-foot basis.

Rental rates for townhouses and basement apartments are also higher this year versus last year. Based on listings on Rentals.ca, landlords are asking an extra $200 a month for basement units, and about $450 more a month for townhouses.

Based on Rentals.ca listings, renters of studio units would be asked to sign leases with rates 6.3 per cent higher than the average last year, or $22 more per month.

When it comes to average rent by province, British Columbia had highest rent at $2,682 per month in September 2022, an annual increase of 31 per cent. That number represents all property types and is an average based on cities across the province, Rentals.ca says.

Following British Columbia, Nova Scotia has the second highest average rent, at $2,453, an increase of $643 over the same time last year. The average rental rate in the province is now higher than in Ontario, where the average is $2,451, thanks to a 36 per cent increase year-over-year.

Information on other parts of Canada is available on Rentals.ca's blog. The site did not have data for all provinces and territories.

Looking at major cities in Canada, the average rental rates for apartments and condominium apartments were the highest Vancouver Landlords were asking for an average of $3,225 per month, the third highest annual rent inflation in Canada, at an increase of 29.3 per cent, year-over-year. London, Ont., with a 33.1 per cent rental increase, had the highest annual rent growth, followed by Toronto at 31.2 per cent.

Gatineau, Que., with 2.3 per cent, and Fort McMurray, Alta., with 2.4 per cent, were two cities in Canada with the lowest change in rent.

After the pandemic, condominium rental rates have rebounded in Toronto and Vancouver by 46 per cent and 54 per cent, according to Rentals.ca. There were no big changes in condos rates in Ottawa and Montreal but Montreal experienced a $256 per month increase in September listing prices, compared with the same time last year.