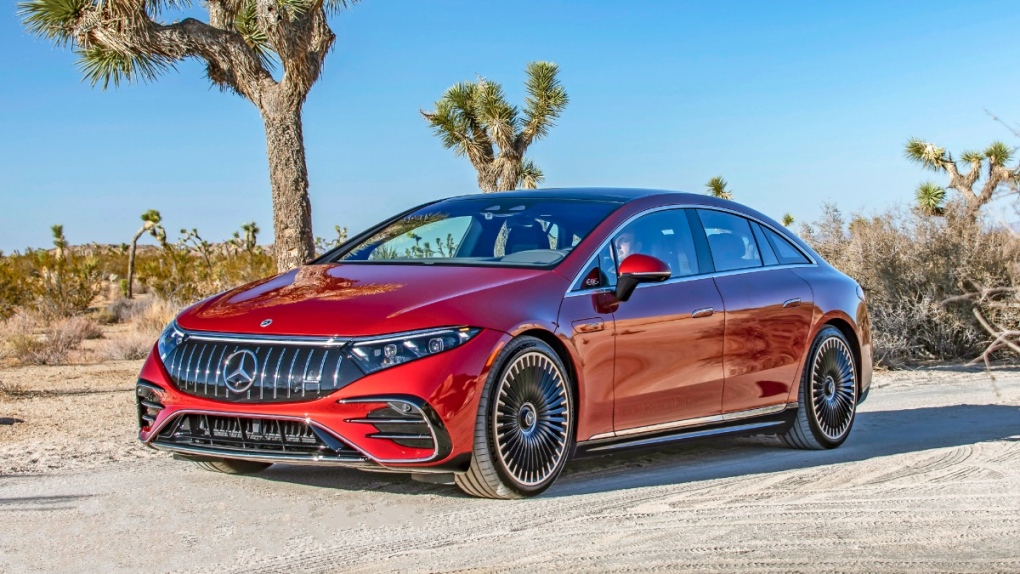 The electric vehicle market is rapidly changing. Two recently released models are blazing the trail for a brand-new segment: the electric luxury sedan class. Those two cars are the 2022 Mercedes-Benz EQS and the 2022 Audi e-tron GT. Both offer flagship levels of luxury, but they differ greatly in their execution. The car experts at Edmunds compare and contrast these two electric newcomers to help you decide which premium battery-powered four-door is right for you.

On paper, the e-tron GT's range is unimpressive, as the EPA only rates it at an estimated 238 miles per charge. But in Edmunds' real-world range testing, it achieved 273 miles. That number likely helps ease range anxiety for first-time EV buyers, but it still falls short of the EQS' range. With an EPA-estimated 350 miles, Edmunds drivers were able to squeeze an incredible 422 miles out of the rear-wheel-drive EQS 450+, 72 more miles than its EPA estimate. That made the EQS Edmunds' new EV range record holder by a fair margin, until the pricier Lucid Air Dream came along.

At a Level 3 or DC fast-charging station, the e-tron GT can restore roughly 180 miles in 22 minutes. Meanwhile, an EQS plugged into the same charger would add about 186 miles in just 15 minutes.

The EQS is in many ways the Mercedes S-Class reimagined in EV form, and as such it's not meant to be a tire-scorching performance machine. The e-tron GT, on the other hand, is. In Edmunds' testing, editors noted that while the EQS 450+ delivers adequate acceleration, it's not as quick as other luxury EVs. The EQS hit 60 mph in 5.7 seconds, compared to just 3.8 seconds for the e-tron GT. Granted, the Audi has more power (496 horsepower and 464 lb-ft of torque versus 329 horsepower and 419 lb-ft in the 450+) and the advantage of all-wheel drive. The higher-trim 516-horsepower EQS 580 4Matic, which has all-wheel drive, is probably more comparable in terms of acceleration, though it's significantly more expensive with a starting price north of around $120,000.

But even if the EQS can match the e-tron GT in a straight line, it can't keep up with it in the canyons. Though it's not quite as fun to drive as its close relative, the Porsche Taycan, the e-tron GT is more engaging and nimble than the EQS. If you're looking for a four-door electric sports car, this isn't it. But it certainly lives up to the GT designation in its name as a quick and capable grand tourer.

The sharp lines of the e-tron GT's cabin help it look the part of a futuristic space car, and its all-digital instrument panel and responsive 10.1-inch touchscreen with crisp graphics further solidify that image. Somehow the EQS manages to look even more sci-fi. Much of the credit for that goes to its available Hyperscreen dashboard, a feature that uses three screens -- one for the gauge cluster, one for the front passenger and a massive center touchscreen -- to create the illusion of one extra-wide display that spans the entire dash. It makes for an impressive cockpit you'll want to show off at every opportunity.

Lower-slung than the Mercedes, the Audi is more difficult to get in and out of. The EQS also has a larger back seat, though it doesn't offer the spaciousness you'd expect from an S-Class-inspired EV. Behind those rear seats is a generously sized cargo area, offering 22 cubic feet of space. The e-tron GT, meanwhile, despite having both a rear and front trunk, delivers just half that.

The Mercedes EQS and Audi e-tron GT have similar starting prices of about $103,000. Not an insubstantial sum, but you'll feel like you're getting your money's worth with either car. Both are well built, phenomenal to drive and easy to live with as EVs go. But technically, the EQS is a size class up from the e-tron GT, so you're getting more car for the same price. One plus with the Audi: It comes with three years of complimentary fast charging through the Electrify America network. But then again, if you can afford to drop over $100,000 on an electric luxury sedan, paying for a fast charge is not likely an issue.

With greater range, more utility and more impressive technology, the Mercedes-Benz EQS is our winner and the better buy for our money. But if you prefer a premium four-door EV with a sleek look and sporty driving dynamics, the e-tron GT is definitely worth considering.