What's the connection between QAnon and March 4? 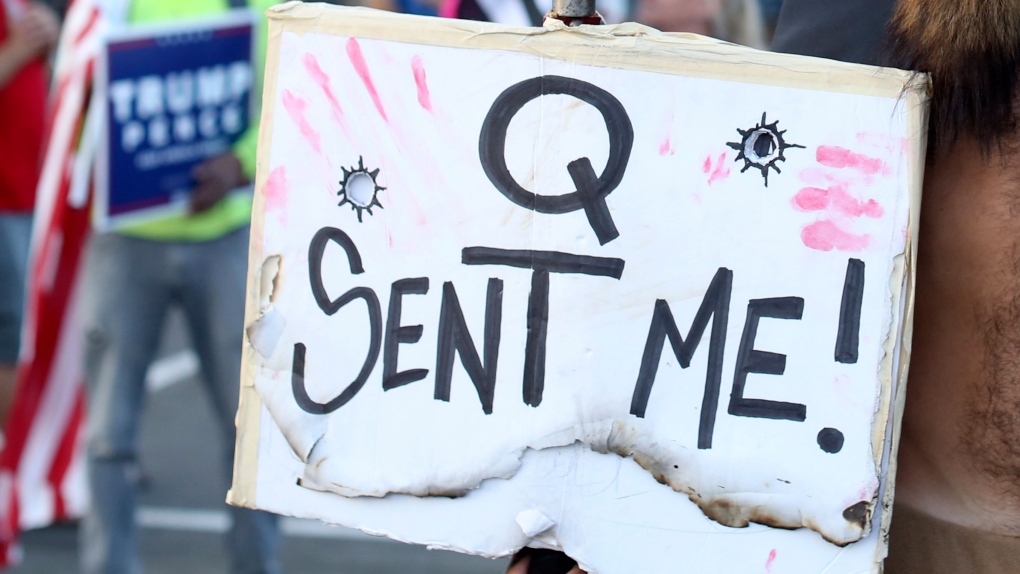 A Qanon believer speaks to a crowd of U.S. President Donald Trump supporters outside of the Maricopa County Recorder's Office where votes in the general election are being counted, in Phoenix, Thursday, Nov. 5, 2020. (AP Photo/Dario Lopez-MIlls)

TORONTO -- Despite whispers of another attack on the U.S. Capitol perpetuated by QAnon believers and right-wing militias, no threat materialized on March 4, an auspicious day for certain sects of the conspiracy movement.

Capitol Police, supported by intelligence from the FBI and Homeland Security, reported they had uncovered a “possible plot” in chatter between groups like Three Percenters, an anti-government militia, and QAnon conspiracy believers.

While the Senate remained in session, the House of Representatives cancelled a hearing and the Hill was on high alert in response.

The chatter centred on a second rumoured Capitol breach and the unfounded belief that Thursday marked the day Donald Trump would swoop in, seize power from the Democrats (possibly through military means) and be inaugurated – March 4 was traditionally an inauguration date for U.S. presidents until 1933.

Several QAnon influencers, on platforms like Gab, Telegram and Parler, insisted that March 4 would be a “false flag” operation, a ruse to draw out Trump supporters to the Capitol only to pin blame on them for any violence that ensued.

“No one is doing anything today,” reads a prominent thread on Patriots.win, a successor to TheDonald.win, as reported by the Washington Post. “This is a lie the government created to make YOU the bad guy.”

Others continued to hawk the idea that the day would be a turning point.

In the six weeks since Joe Biden’s inauguration and the Capitol riot, QAnon, already a non-centralized movement, has splintered even further.

The supposed “leader” of the movement “Q,” has not posted on their regular forums for more than 80 days, heightening tensions.

For a portion of QAnon believers, the obsession with March 4 stems from an unfounded theory that the U.S. became a corporation with the passing of the District of Columbia Organic Act of 1871. This belief has roots in a fringe libertarian school of thought that federal laws, taxes and even currency restrict individual rights.

The rights of the individual is a major recurring theme for QAnon believers, many of whom oppose COVID-19 mask mandates and lockdowns as they are viewed as infringing on the rights afforded to them by the U.S. Constitution or equivalent legislation in different countries.

In light of this view, some QAnon believers say that every U.S. president since the act was passed is illegitimate, according to the BBC Monitoring blog.

QAnon influencers were “using conspiratorial ploys as the way of knitting together and maintaining the integrity of the community following the loss of the election, Trump's Twitter access and January 6,” explained radicalization researcher Marc-Andre Argentino in a Twitter thread.

Argentino noted the growing overlap between QAnon and the “Sovereign Citizen” libertarian belief system cited by the BBC, and said March 4 is just another example of the constantly moving “goal posts” for QAnon rank and file members to see any of their supposed prophesies come to pass.

In the weeks since the Capitol riot, approximately 300 people have been charged with federal crimes for taking part in the assault. Five people died, including a Capitol Police officer.