UN insists vaccine delivery to Yemen cannot be a one-off 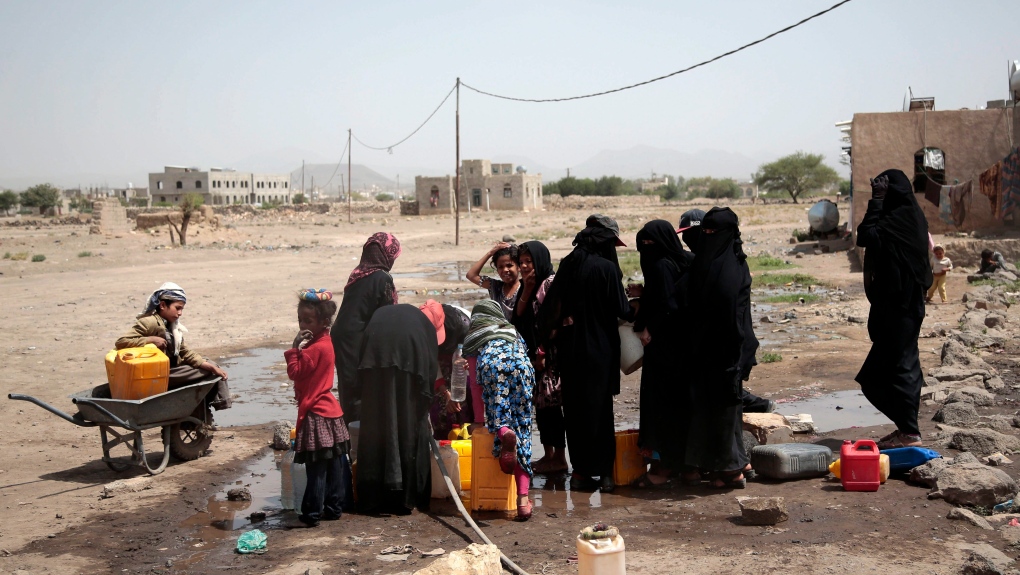 In this photo from files taken on Wednesday, July. 12, 2017, people fill buckets with water from a well that is alleged to be contaminated water with the bacterium Vibrio cholera, on the outskirts of Sanaa, Yemen. (AP Photo/Hani Mohammed)

AMMAN, Jordan -- The UN child agency said Sunday that it has flown 1.9 million doses of vaccines to war-torn Yemen, its first aid delivery since a Saudi-led coalition fighting Shiite rebels tightened a sea and air blockade earlier this month.

Regional UNICEF director Geert Cappelaere described Saturday's shipment as a "very small step" at a time of immense need and warned that it must not be a one-off.

The coalition had promised to reopen Yemen's main airport in the capital of Sanaa and the Red Sea port of Hodeida to humanitarian traffic by late last week.

However, two UNICEF vessels carrying food, water purification tables and medicines heading to Hodeida have not yet received clearance to dock, Cappelaere said.

"We hope all will live up to their promises," Cappelaere told reporters in the Jordanian capital of Amman. "These supplies are urgently needed."

More than 11 million children in Yemen are in acute need of aid, and it is estimated that every 10 minutes a child in Yemen dies of a preventable disease, he said.

New alarms were raised by an outbreak of diphtheria, with suspected cases already reported in five governorates, said Cappelaere. Cholera and acute watery diarrhea spread rapidly in recent months, including among children, with close to 1 million suspected cases reported.

"The war in Yemen is sadly a war on children," he said. "Yemen is facing the worst humanitarian crisis I have ever seen in my life."

It involves Iranian-backed Shiite rebels, known as Houthis, who control many population centres in western Yemen, and an internationally recognized government that has the backing of Saudi Arabia and several other key Persian Gulf states.

The Saudi-led coalition tightened its Yemen blockade on Nov. 6, in response to rebel missile fire toward the Saudi capital.

Since then, the coalition has come under growing international pressure to ease the restrictions.

Last week, it said it would reopen Sanaa airport and the port of Hodeida to humanitarian aid shipments by the end of that week.

UN flights to Sanaa resumed Saturday, including the shipment of vaccines.

Cappelaere said the 1.9 million doses are meant to vaccinate 600,000 children across Yemen against diphtheria, meningitis, whopping cough, pneumonia and tuberculosis.

Close to 180 cases of diphtheria have been reported in the past two months, starting from the governorate of Ibb, but spreading to four other districts.

The delivery of vaccines Saturday "cannot be a one-off," he said, adding that many more supplies, including vaccines, are needed.

Like other aid officials in recent months, he appealed for a swift end to the war. "The absence of a political solution to the Yemeni crisis is deplorable," he said.

Yemen, the Arab world's poorest nation, has been caught up in the rivalry between regional powerhouses Saudi Arabia and Iran that has also helped fuel conflicts elsewhere, including in Syria.