Royal sleepover: Homeowners hope to cash in on the royal wedding 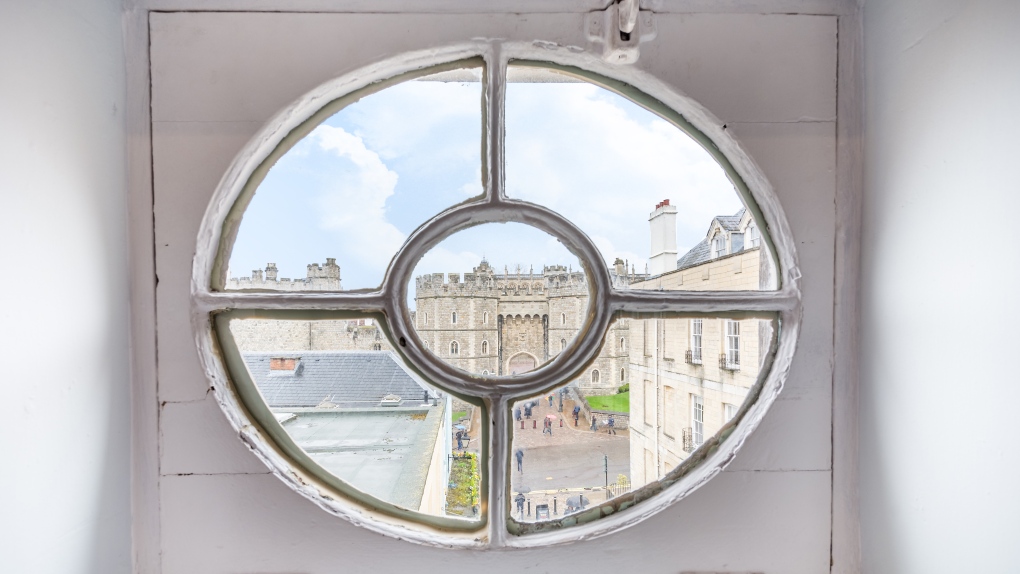 This property, a townhouse described as being 'next to Windsor Castle,' has been booked by out-of-towners at the price of approx. $3,483 a night. (Credit: Castle Property Group www.castlepropertygroup.co.uk)

With an estimated 100,000 visitors expected to pack Windsor for the royal wedding, locals are hoping to reap the benefits by renting out their homes for thousands of dollars a night.

Locals in Windsor, U.K., and surrounding areas are listing their homes on Airbnb, aiming to cash in on royal watchers seeking to get as close as possible to the royal wedding.

Indeed, accommodation close to the regal nuptials will be highly sought after among tourists who want to catch a glimpse of Prince Harry and Meghan Markle on their big day.

Airbnb says the “unlikely tourist hotspot Slough,” which is an approximately 10 minute drive from Windsor, has seen an increase of 1,438 per cent in guest arrivals on the rental website when compared to the same period last year.

Surrounding areas have also seen an increase in guest arrivals, with Maidenhead increasing by 364 per cent while arrivals to Windsor are up by 194 per cent and Reading by 57 per cent.

While patriotic Brits rank high among the nationalities flocking to London for the royal wedding, Americans are number one on the list, rounded out by France, Germany, and Australia.

‘Next to Windsor Castle’

One of the properties on Airbnb, a townhouse described as being “next to Windsor Castle,” has been booked by out-of-towners at the price of approximately $3,483 a night, Castle Properties managing director Tim Woods said in a telephone interview with CTVNews.ca.

On a regular weeknight during the year, it would be listed at approximately $609 on a weeknight, or $696 on a weekend.

About 100 metres away from the entrance of the castle, the terraced property has 5 bedrooms, and can accommodate 9 guests. Woods describes the townhouse’s location as being the “closest accommodation including Airbnb or hotels or anything you can get to the castle.

“From the bedroom window they’ll see the royal carriage coming out of Windsor Castle and going down the road,” he said.

“If they walked out the front door, they’ll be right in the best position where everyone else will be gathering around the castle.” 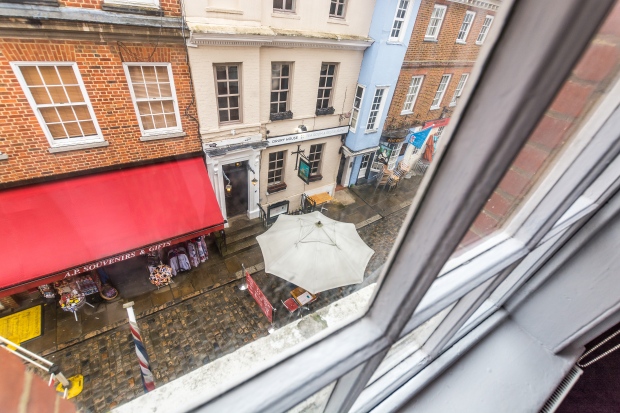 The view from the townhouse window. (Credit: Castle Property Group)

Woods is the managing director of Castle Properties, which manages another three properties suitable to royal wedding watchers, one of which is a cottage in Windsor, while the other two are located in nearby Eton, a 5-minute walk away.

The period cottage, which could sleep up to 8 people, is also within a couple of hundred metres of the wedding action. Listed at $2,611 a night to stay there over the royal wedding, it would typically be listed at $350-435 a weeknight at other times of the year.

The cottage and Eton properties have not yet been booked but Woods says he’s received inquiries about booking properties for the royal wedding period from all over the world, including from American, Canadian and French travellers, as well as tourists from within the United Kingdom.

Also in Windsor, social media influencers and entrepreneurs Megan and Whitney Bacon-Evans have listed their “stylish Windsor home perfect for the royal wedding,” for the first time on Airbnb – and likely for the last time - at $3,219 (1,850 pounds) a night.

A Victorian-style home, which would be described as a townhouse in North America, the decor is “Palm Springs meets Scandinavia with a dash of French and obviously an English twist,” says Whitney, originally from the U.S. while her wife Meghan is from Windsor. 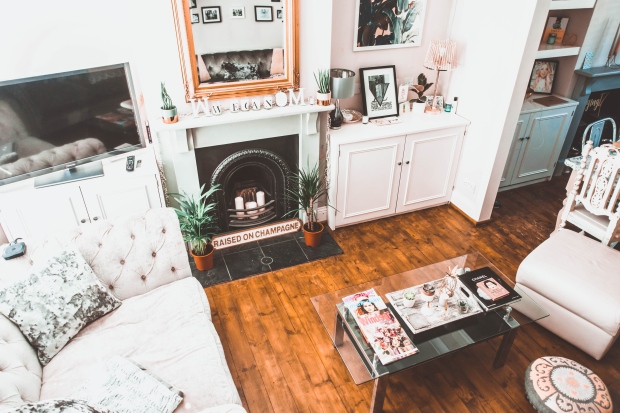 The home, which has a parking garage, 2 bedrooms and could sleep 4 guests, is a five-minute walk into town, and about an eight-minute walk to the castle.

Listed just days before the wedding, there have been some inquiries from journalists, but it has not been booked yet.

Meanwhile in nearby Eton, a one-bedroom, 2-bathroom apartment described as an “exclusive riverside flat with stunning castle view,” has been posted on Airbnb for $3,047 a night.

Alexander Cartlidge listed the property a few months after reading an article about locals offering their flats for the royal wedding weekend.

While Cartlidge, an airline pilot, has received a few queries, it hasn’t been booked – yet. If it were to be rented out, he’d stay with nearby family members.

The property is ideal, he says, “mainly because of the location; it’s on the river,” with a “great view of the castle – actually a stunning view.” 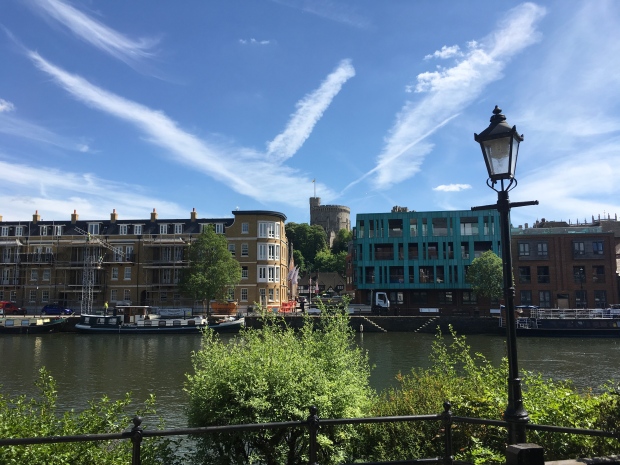 A view from the riverside flat. (Credit: Alexander Cartlidge)

Furthermore, it’s “nicely positioned in Eton, away from the tourists in Windsor.”

Needless to say, Windsor and the surrounding areas are expected to be extremely busy for the royal wedding weekend, and there will be a series of road closures and limited parking to accommodate the large number of expected visitors.

The Royal Borough of Windsor and Maidenhead has released a series of tips, including the recommendation that visitors book parking in advance.

Anthony Eskinazi, the founder of JustPark, which allows people to rent out underutilized parking spaces says he, too, has seen an increase in Windsor homeowners listing their spaces before the royal wedding.

“Both the supply and demand have increased considerably in the buildup to the royal wedding,” he said.

According to JustPark, since the date of the Royal Wedding was announced, demand for parking around Windsor has increasde by 50 per cent. And the average price of parking has doubled, from about $10.50 to $22.

Indeed, there is hope the interest in Windsor will boost the town’s economy over the long run.

“Windsor has always been a royal town but we like to think it’s certainly the Queen’s favourite home so when we have a royal wedding … it’s wonderful,” Woods said.

“People are always going to be wanting to come in and see the castle and see where they got married.”

Still, London-based property litigation solicitor Aileigh Brough cautions homeowners may fail to realize money made by renting out their flat is taxable income.

They should consider “how much money they’re making and whether or not that’s going to push them over their income threshold and make them liable for tax,” said Brough, with Meaby&Co Solicitors.

“If you go over the limit you do have to declare it in your tax return under rental income.”

“People are quite unaware that they’re able to do that.… people aren’t informing themselves and they are quite eager to cash in, but there’s a bit of a bigger issue there that people forget to think about.”

CTV News’ Senior Web Producer Mary Nersessian will be among the news crew on the ground in Windsor and London, reporting on the royal wedding with behind-the-scenes updates on CTVNews.ca, and social media channels including Instagram, Facebook, Twitter and Snapchat. Starting on Tuesday, watch for her Daily Dispatch from Windsor and follow the wall-to-wall digital coverage on CTVNews.ca/royals.