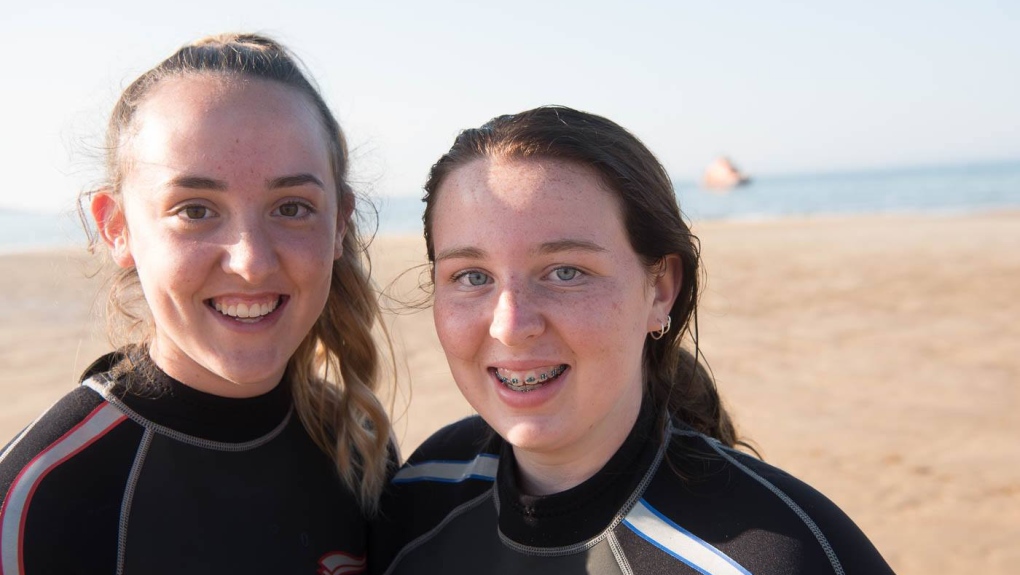 Brave sisters Isla, 15, and Eilidh Noble, 14, were enjoying time at the beach near Fraserburgh in Scotland when they came to the rescue of a man and child who had got into difficulty in the water. (RNLI Fraserburg)

Two brave young sisters have been praised for rescuing a man and child from drowning in the sea off Scotland by using an inflatable mattress floatie to carry them to shore.

Isla, 15, and Eilidh Noble, 14, were enjoying time at the beach near Fraserburgh on Monday when they heard shouting from farther out.

The Fraserburgh Academy pupils thought the man was playing with his son on his shoulders before realizing he was in serious trouble.

The pair swam out with a floatie, or lilo, and when they reached the father and son, put the child on it and got the man to lie across it before heading back to shore.

They were joined in the water by Keith Gray, who had been enjoying a family picnic at the beauty spot. Gray helped drag and push the floatie onto the beach.

Back on dry land the child was well, but the man had become unconscious. Isla phoned 999 – the British equivalent of 911 – and asked for the coast guard.

By another stroke of luck, nurse Sophie Ross had been walking on the beach when she heard cries for help.

“The young lass had pulled the fellow out of the water and he was on the lilo,” Ross told RNLI Frasburgh, the volunteer coast guard service.

“We put him in the recovery position and got him to cough up some sea water, checked his pulse and breathing and kept the coastguard up to date with his condition until they arrived.”

Emergency services arrived quickly and after several minutes the man regained consciousness enough to lift his oxygen mask slightly and thank his rescuers before being airlifted to hospital.

“The girls, for being so young and springing into action and having the presence of mind to phone the coast guard and calmly give them the details of the incident, enabled the emergency services including ourselves to respond and arrive so quickly.”

The sisters had a surprise visitor the following day when the man they had rescued just over 24 hours earlier arrived at their home to thank them personally because his children still had a dad to go home to.

The holidaymaker, known only as Phil, presented them with a box of "Heroes" chocolates at their Fraserburgh home, according to the BBC.

"It was really good for the girls to see Phil and they were really pleased that he looked so fit and well and had made a full recovery," the sisters’ mother Lisa told the RNLI.

He gave his teenage rescuers a handwritten note from his children, thanking them for saving their father and brother, who is believed to be four.

It read: "For the heroes that saved our father and brother, many, many thanks for being so courageous, nothing is big enough to thank you, but this is just a tiny token of our appreciation."