Skirmishes break out in Hong Kong mall amid counter rallies 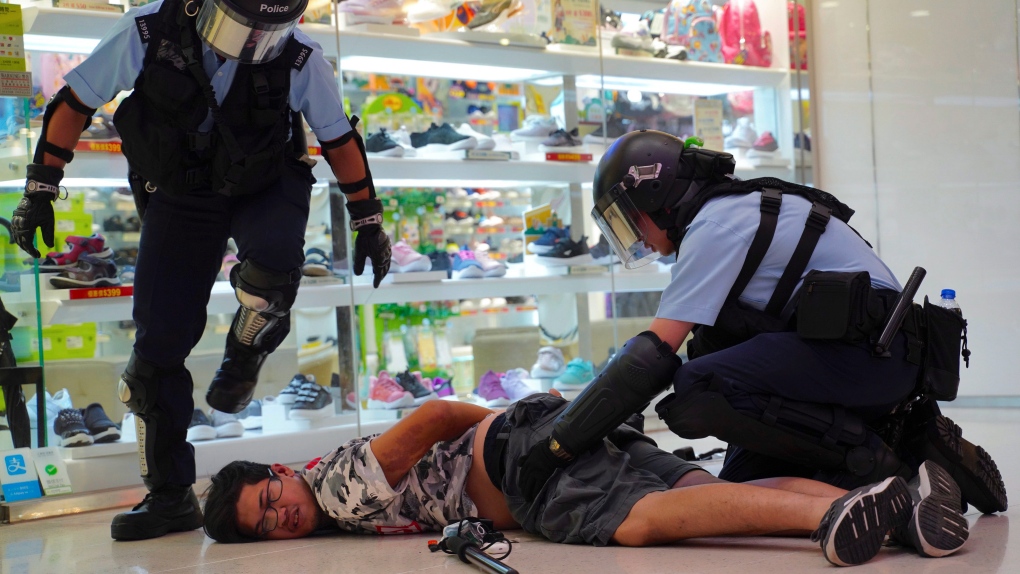 HONG KONG -- Skirmishes broke out Saturday at a shopping mall in Hong Kong between supporters of the ongoing protests for democratic reforms in the semiautonomous Chinese territory and people backing the central government in Beijing.

The situation turned chaotic as groups of people traded blows and some used umbrellas to hit their opponents. Police later moved in to defuse the situation, with several people detained.

The clashes amid the mid-autumn festival holiday came after several nights of peaceful rallies that featured mass singing at shopping malls by supporters of the months-long pro-democracy protests.

Thousands of people also carried lanterns with pro-democracy messages in public areas and formed illuminated human chains on two of the city's peaks on Friday night to mark the major Chinese festival.

Protesters have refused to yield despite the Hong Kong government's promise to withdraw an extradition bill that triggered the protests. They have widened their demands to include direct elections for their leaders and police accountability.

Many saw the extradition bill, which would have allowed some Hong Kong suspects to be sent to mainland China for trial, as an example of Hong Kong's autonomy eroding since the former British colony returned to Chinese rule in 1997.

Shops closed at Amoy Plaza after the brawls. The atmosphere remained tense as pro-democracy protesters jeered at police, some of whom were seen hitting detainees with batons to subdue them. Local media showed minor scuffles continuing outside the mall as people left.

In the northwestern suburb of Tin Shui Wai, several hundred people marched, carrying pro-democracy posters and waving American flags, in defiance of a police ban on a rally in the area. Riot police intercepted them and prevented them from marching to a park.

Some 200 high school students staged a sit-in Saturday at a downtown public square. Many students have formed human chains outside their schools as classes resumed two weeks ago after the summer break.

"Many students feel angry and unhappy. Today's gathering is a platform for us to vent our frustrations," said Lia Ng, 14.

The unrest has further battered Hong Kong's economy, which was already reeling from the U.S.-China trade war. It is also seen as an embarrassment to China's ruling Communist Party ahead of Oct. 1 National Day celebrations.

At a netizens news conference earlier Saturday, activists warned that violence could escalate if the government continues to turn a deaf ear to citizens' demands. They wore face masks to shield their identity for fear of reprisals from the government.

One of the activists said it was "natural behaviour that people escalate their ways" if peaceful means failed to elicit any response.

Police have banned a major rally planned in central Hong Kong on Sunday, but protesters have vowed to turn up anyway. Some others are also planning to march to the British Consulate, after a similar march to the U.S. Consulate last weekend.

China's ruling Communist Party, which has blamed foreign powers for fomenting unrest, said in a commentary on social media Friday that Hong Kong protesters should not turn to the west to resolve their problems.

The party's Central Political and Legal Affairs Commission said high housing costs, lack of jobs and other issues sparked their grievances and that young people should "look north" to opportunities in mainland China.

"The way out is not in the West," the commentary said.

"Where 'democracy' and 'freedom' are brought in with the West's help, there is scorched earth," it said, adding that expecting Western countries to solve distant problems "can only be a fantasy story."

"The way out really is at home," it added.

Associated Press journalists Joe McDonald in Beijing and Raf Wober and Phoebe Lai in Hong Kong contributed to this report.