Silence, devastation mark Bahamas town; but some are staying 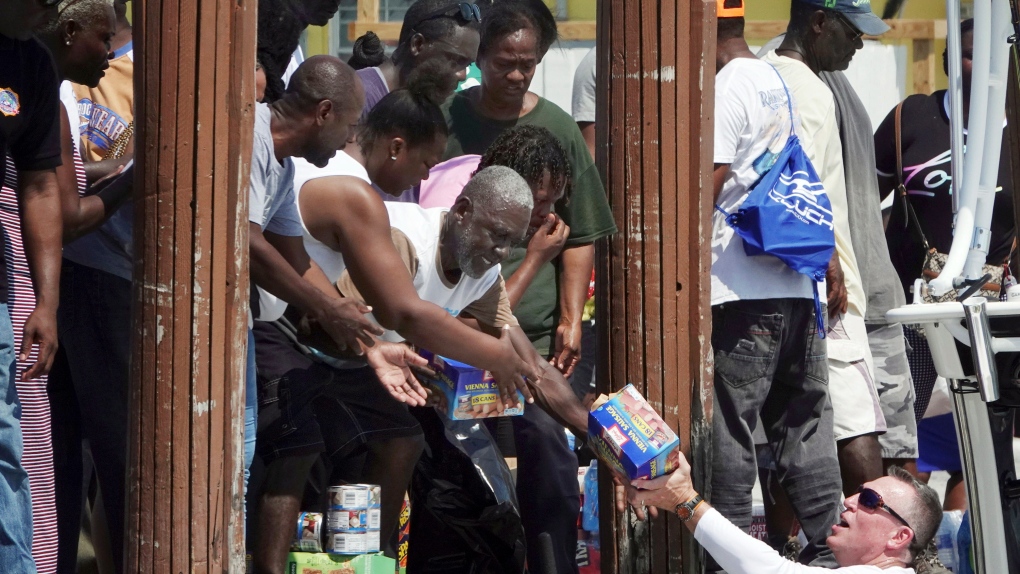 At the airport and dock, hundreds of people clamour for seats on airplanes and berths on ships arriving with aid and departing with people who lost their homes when deadly Hurricane Dorian struck the Bahamas.

Nearly a week after disaster roared in from the sea, the rest of Marsh Harbour on Abaco island felt empty Saturday. A hot wind whistled through stands of decapitated pine trees and homes that collapsed during the most powerful hurricane in the northwestern Bahamas' recorded history.

Rescue teams were still trying to reach some Bahamian communities isolated by floodwaters and debris after the disaster that killed at least 44 people, most of them on Abaco Island.

The U.S. Coast Guard said it has rescued a total of 290 people in the northern Bahamas following the hurricane. Six MH-60 Jayhawk helicopters and nine cutters are helping in the aid effort, the Coast Guard said.

With so much air traffic, Bahamaian officials banned non-aid flights over Grand Bahama and Abaco Islands. The National Emergency Management agency also threatened to revoke flight permission from any pilots charging fees to evacuate people from the islands.

Meanwhile, the United Nations said eight tons of food supplies were on the way by ship. Some 14,700 ready-to-eat meals as well as logistical and telecommunications equipment are being delivered, said Herve Verhoosel, spokesman for the U.N. World Food Program.

No official figures were available, but much of the population of Marsh Harbour, home to most of the roughly 20,000 residents of Abaco, seemed to have already left. Many were staying with relatives in the capital, Nassau, others with family in Florida and other parts of the United States.

In Marsh Harbour's Murphy Town neighbourhood, on a hill overlooking the azure sea, Jackson Blatch and his son-in-law were already rebuilding. In a blazing midday sun they stripped damaged shingles from Blatch's roofs and tossed them into his truck, parked below the eaves of a home he built by hand.

Like a few other Abaco residents, Blatch is staying on an island pulverized by nature.

"Everybody says, 'Leave.' Leave and go where?" Blatch asked. "My plan is to rebuild this island. I have a lot to offer."

Unlike almost every other home on Abaco, Blatch's house had little damage. He is a builder who prides himself on quality work. When mixing concrete, he never skimps, always precisely blending the recommended amounts of cement, sand and gravel for floors, columns and ceilings.

When he poured his walls and floors, he laced them thick with rebar, constructing a powerful skeleton that resisted the storm.

Instead of using the manufacturer-provided clips on his hurricane shutters, he used long screws on as many as possible to fix the shutters tight to the window frame.

When Dorian hit, it only managed to rip away the shutters with store-bought clips, and a few sections of shingles, leaving some of the Blatch family's possessions wet but the structure and furnishings intact.

So Blatch has power from a generator, drinking water, food and the help of his son-in-law, 25-year-old Moses Monestine.

Abacoans, as island residents are known, describe themselves as a self-sufficient and resourceful, used to making their living from the sea. Blocks and even entire neighbourhoods are taken up by extended families -- a cousin next door to a brother next door to a sister-in-law, forming instant support networks that went into action ahead of the storm.

Many Abacoans work on ships or docks, others at the second homes that wealthy Americans have built throughout the long, curving island.

Brian Russell, 55, is a marine engineer who has lived through three hurricanes on sea and many others on land.

In his home in the Dundas Town neighbourhood, he has six months of drinking water and four months of water for bathing. He has a generator, and months of food.

The destruction doesn't deter him.

"I've been around a long time," he said. "It doesn't bother me. Anywhere you go, life is what you make of it."

Once the water contaminated by the storm is clean, Russell said, he can live on fishing and gardening. His little garden of onion, tomato and banana plants was destroyed, but he plans to replant, and even add soursop, mango and sugar apple.

Others were more stuck than determined.

Sterling McKenzie, a 67-year-old retired equipment operator, is living in his sister's house with other relatives whose homes were destroyed. They are surviving on water and food donated by Bahamian officials and aid workers who pass by daily.

"We might as well stay here and battle it out," he said. "I ain't got no choice."