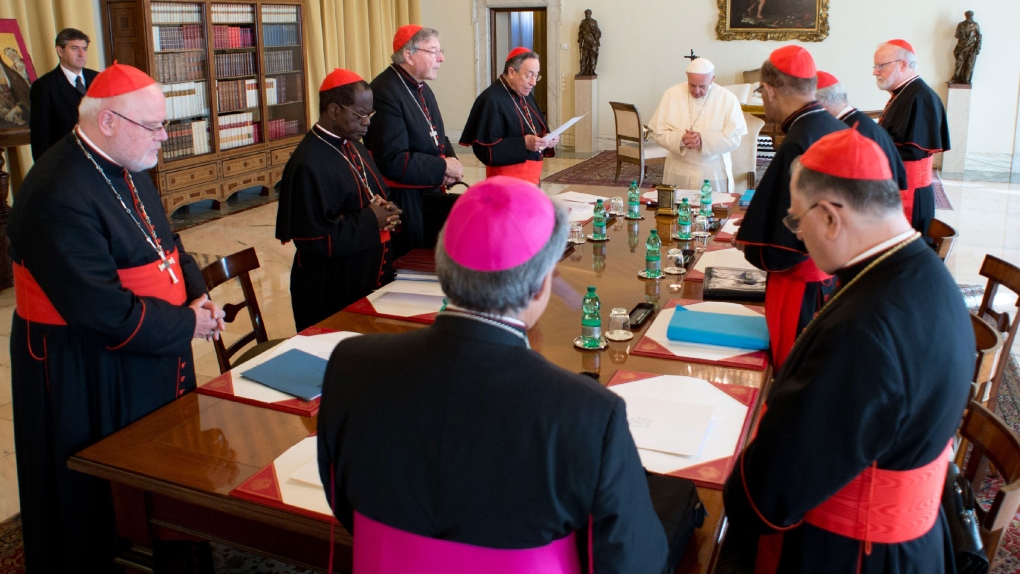 Pope Francis meets with his so-called 'Group of Eight' cardinals during their first meeting at the Vatican, Tuesday, Oct. 1, 2013. (L'Osservatore Romano)

VATICAN CITY -- Pope Francis opened a landmark meeting Tuesday on reforming the Catholic Church, saying he wants a missionary church with a modern spirit that gives hope to the poor, the young and the elderly like his namesake St. Francis did.

Francis convened his own parallel cabinet of eight cardinals from around the globe for three days of brainstorming on revamping the Vatican bureaucracy and other reforms. The move fulfills a key mandate of the cardinals who elected him pope to involve local church leaders in making decisions about the universal church.

On the same day the meetings started, Rome daily La Repubblica published a lengthy interview with Francis, his second in as many weeks. For someone who has said he abhors giving interviews, Francis has made himself remarkably amenable to taking questions about his faith and vision for the church.

In the interview, Francis denounced the "Vatican-centric" nature of the Holy See administration and acknowledged that popes past had been infatuated with the pomp of the Vatican and its "courtesans."

The pope also explained his affinity for his namesake St. Francis, whose tomb he will visit on Friday during a visit to Assisi, the hilltop town where St. Francis preached his gospel of poverty and caring for the most destitute.

Francis said he wanted a missionary church like that sought by St. Francis: "We need to give hope to young people, help the aged and open ourselves toward the future and spread love."

He said the Second Vatican Council, the 1962-65 meetings that brought the church into the modern world, had promised such an opening to people of other faiths and non-believers, but that the church hadn't made progress since then.

"I have the humility and ambition to do so," he said.

The agenda of the cardinal cabinet meetings is unknown, but one issue is certain to be discussed: overhauling the Vatican bureaucracy, an antiquated administration that is universally disparaged as unhelpful to both the pope and the bishops it's designed to serve.

The scandal over leaked documents last year showed the Vatican bureaucracy to be a dysfunctional warren of political infighting and turf battles, fueling calls for reform from the cardinals who elected Francis pope.

Beyond the scandal, local church leaders have long bemoaned that Vatican courts take years to process requests for annulments and that Vatican offices are simply unresponsive to requests from them and the lay faithful.

Francis himself is a critic: Just this weekend he told the Vatican police force that it was their job to stop the "devil" from creating internal wars through Vatican employees spreading gossip.

"It's a war that you don't fight with weapons but with your tongue," he said.

The Vatican bureaucracy is organized according to a 1988 document "Pastor Bonus," which metes out the work and jurisdictions of the congregations, councils, courts and other offices that make up the governance of the church. Honduran Cardinal Oscar Andres Rodriguez Maradiaga, who heads the pope's advisory commission, said the planned reform won't just make changes to the document here and there.

Indeed, no decisions are expected this week from the talks, and the pope has said reform takes time.

In fact, another Vatican reform is taking its own, separate course.

On Tuesday, the scandal-plagued Vatican bank issued its first-ever annual report in another step toward showing greater financial transparency. The Institute for Religious Works reported a profit of 86.6 million ($116.95 million) in 2012, a four-fold improvement over 2011.

Francis has appointed a commission of inquiry to look into the bank's legal structure and activities, one of the many moves he has taken to get a handle on the Vatican's murky finances.

Such decisiveness comes despite having been "invaded by anxiety" in the moments after he was elected. In the interview with Repubblica, Francis said after the shock of the election, he immediately excused himself from the Sistine Chapel, closed his eyes in a small room off to the side and tried to relax.

"At a certain point, a great light invaded me, it lasted a moment but it seemed very long to me," he told Repubblica's editor. "Then it disappeared and I got up."

He went back into the room where he signed the document accepting the job and headed out onto the loggia of St. Peter's Square to be introduced to the world.