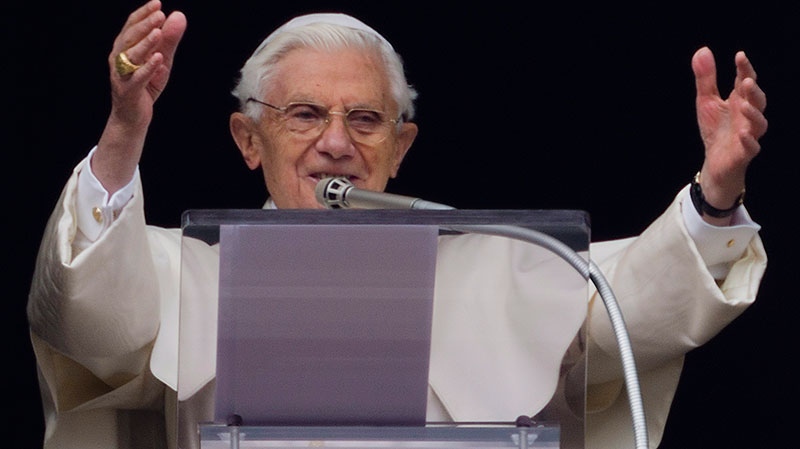 Pope Benedict XVI delivers his blessing during his last Angelus noon prayer, from the window of his studio overlooking St. Peter's Square, at the Vatican, Sunday, Feb. 24, 2013. (AP / Domenico Stinellis)

VATICAN CITY -- Seven months after leaving the papacy, emeritus Pope Benedict XVI broke his self-imposed silence Tuesday by releasing a letter to one of Italy's best-known atheists in which he denied covering up for sexually abusive priests and defended Christianity to non-believers.

It was the first work published by Benedict since he retired and his first-ever denial of personal responsibility for the sex scandal. But what made the letter published in La Repubblica more remarkable was that it appeared just two weeks after Pope Francis penned a similar letter to the newspaper's atheist editor.

The Vatican spokesman, the Rev. Federico Lombardi, said the appearance of the letters was pure coincidence. But they provide evidence that the two men in white, who live across the Vatican gardens from one another, are of the same mind about the need for such dialogue and may even be collaborating on it.

Benedict wrote his letter to Piergiorgio Odifreddi, an Italian atheist and mathematician who in 2011 wrote a book titled "Dear Pope, I'm Writing to You." The book was Odifreddi's reaction to Benedict's classic "Introduction to Christianity," perhaps his best-known work.

In his book, Odifreddi posed a series of polemical arguments about the Catholic faith, including the church's sex abuse scandal.

For nearly a quarter-century, the former Cardinal Joseph Ratzinger headed the Vatican's Congregation for the Doctrine of the Faith, the Vatican office responsible for handling abuse cases. He was prefect when the scandal first exploded in the U.S. in 2002 and was pope when it erupted on a global scale in 2010 with revelations of thousands of victims in Europe and beyond, of bishops who covered up for pedophile priests and of Vatican officials who turned a blind eye to the crimes and in some cases actively interfered with bishops trying to report pedophiles to police.

In his letter, Benedict denies personal responsibility. "I never tried to cover these things up," he wrote.

"That the power of evil penetrated so far into the interior world of the faith is a suffering that we must bear, but at the same time, we must do everything to prevent it from repeating," he wrote, according to Repubblica. "Neither is it comforting to know that, according to research, the percentage of priests who commit these crimes isn't any higher than the percentage of other similar professions. Regardless, one shouldn't present this deviation as if it were something specific to Catholicism."

As prefect, Ratzinger in 2001 compelled bishops around the world to send all credible cases of abuse to his office for review. He took the move because it had become clear to him that bishops were merely shuffling abusive priests around, rather than subjecting them to church trials.

Ratzinger actually tried in 1988 to get around the cumbersome church trials, asking the Vatican's legal office for quicker ways to permanently remove priests who raped and molested children. But he was rebuffed, with the legal office saying that doing so would compromise the priests' ability to defend themselves.

Ratzinger was hamstrung by Pope John Paul II's unspoken policy against letting young men leave the priesthood and his overriding concern with preserving the rights of accused clerics, often at the expense of victims -- a concern formed in part by his experiences in communist-controlled Poland, where priests were often accused of trumped-up charges.

Eventually, a year after the abuse scandal exploded in the U.S., Ratzinger pushed through administrative changes in 2003 and 2004 that enabled his office to permanently remove abusers without going through a church trial. But that decision came decades after his office began receiving a steady stream of documentation about the scale of abuse in the U.S. -- far too late, according to victims.

"In the church's entire history, no one knew more but did less to protect kids than Benedict," said Barbara Dorris, outreach director of the U.S.-based victims' advocacy group SNAP, the Survivors Network of those Abused by Priests. "As head of CDF, thousands of cases of predator priests crossed his desk. Did he choose to warn families or call police about even one of those dangerous clerics? No. That, by definition, is a coverup."

After the 2010 explosion of abuse cases, the Vatican issued informal guidelines ordering bishops to report suspected abusers to police in countries where it is required. But the Vatican has yet to remove or sanction any bishop who covered up for an abuser.

Benedict became the first pope in 600 years to resign when he retired Feb. 28, setting the stage for the election of Francis two weeks later. Benedict said at the time that he would spend his final years "hidden from the world," living in a converted monastery tucked behind St. Peter's Basilica, reading and praying.

Benedict's decision to cloister himself was in part due to his own shy, bookish nature, but also to make clear that he was no longer pope and that his successor was in charge.

Benedict has been seen only a handful of times since his retirement and only once with Francis, at an official Vatican ceremony in July. A prolific writer, he has published nothing since retiring except for the encyclical "The Light of Faith," which was signed by Francis but was actually written almost entirely by Benedict.

Francis responded in the same pages to a series of questions posed to him by Repubblica's atheist editor in editorials this summer.

Francis' letter was clearly not penned by his own hand: It involved language that is much closer to Benedict's style, including arcane references to early church fathers like Tertullian whom only Benedict and a few others at the Vatican have ever cited. But Lombardi denied the two had collaborated on it.

"They are autonomous and distinct initiatives," Lombardi told The Associated Press.

In Benedict's letter, he takes Odifreddi to task for what he said was the "aggressiveness" of his book, and responds to many of the arguments with piqued criticism himself.

"What you say about the figure of Jesus isn't worthy of your scientific standing," wrote Benedict, who authored a highly praised, three-volume work on the Jesus Christ during his pontificate.

He similarly criticizes Odifreddi's "religion of mathematics" as "empty" since it doesn't even consider three fundamental themes for humanity: freedom, love and evil.

On evolution, he wrote: "If you want to substitute God with Nature, the question remains: What does this Nature consist of? Nowhere do you define it and it appears rather like an irrational divinity that doesn't explain anything."

Odifreddi, for his part, wrote in an accompanying piece Tuesday that he was stunned to have received the letter, though he said he wrote the book precisely in hopes Benedict might read it. He said he sought, and obtained, Benedict's permission to publish the letter.

He planned to re-issue his book with Benedict's letter included, calling the exchange "an unprecedented dialogue between a theologian pope and an atheist mathematician, divided in most everything but drawn together by at least one objective: the search for Truth."