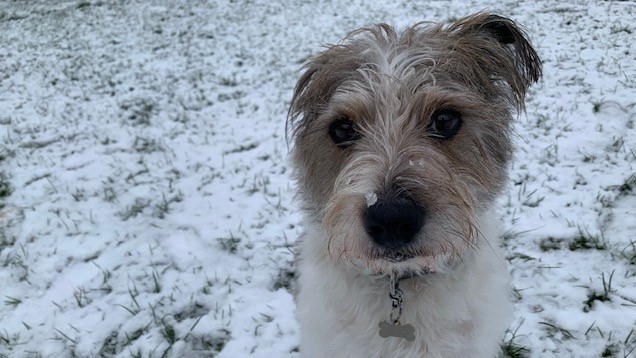 Sam the dog is pictured in this undated photo, in London, U.K. (Mellissa Fung)

My name is Sam and I live in London, England. But I was born in America, same as you. We could be cousins or something. Except you’re German shepherds and I’m…well, not really sure what I am.

Breeding is so overrated.

Some people call me Sammy, but when I’m hanging around with you guys, I prefer Big Sam.

Ever bag a squirrel? Guess you can’t do that at the White House. I have a bit of the wild in me. Lately I’ve been stalking a pair of neighborhood foxes. Now that’s what I call sport.

You probably have cute little bunnies running around the south lawn. It must take a lot of restraint not to go after one of those beauties.

Can we be like Instagram friends or something? I have a few followers and this week I posed in the snow, you know, looking straight into the camera. Works every time.

Do you guys speak German?

Do you have your own room?

Can you just stroll around wherever you want, like saunter into the Situation Room?

I think I have a southern accent since I come from North Carolina. Okay, this may be gross but I had worms when they rescued me from the shelter. And I was totally anti-social, hiding under the table and stuff. I’m like the poster dog for abused puppies. I never get sick of telling that story. It gets them every time.

“Poor Sam. It must have been awful.” Out comes the turkey stick.

You see, we rescue dogs know all about life on the rough side, right Major? It must have been totally far out when the Bidens—the BIDENS—brought you home from the Delaware Humane Association.

And now you’re an icon, first shelter dog in the White House. I’m getting emotional.

Do you guys have to stand up when Joe, I mean Mr. President, comes into the Oval office? That would be the awesomest trick. Hail to the Chief and all.

Hey, just realized that makes you Major, Champ and Chief. That is some crazy rat pack.

You might like living in England. You would certainly have to stand for God Save the Queen. I go to her Regent’s Park every day and run around trying to trip joggers. What a blast.

Here, they don’t call you a German shepherd, you’re an Alsatian Wolf Dog. Is that like the wildest name you’ve ever heard?

“Hello, I’d like to introduce you to my friends Major and Champ. They’re wolves.” Oh My God that would shake up the west wing. You could probably get on Wolf Blitzer’s show.

I’ve been on television. I wasn’t even nervous. All I had to do was sit there and not bark. No big deal. Turkey stick time.

I’m glad we got together like this. You’re like the most famous dogs in the world now and I’m your new best friend.

Send me a shot of you two sleeping in Lincoln’s bedroom. The very idea gives me the shivers. Best of all, check out that rose garden will you? All those lovely bushes.