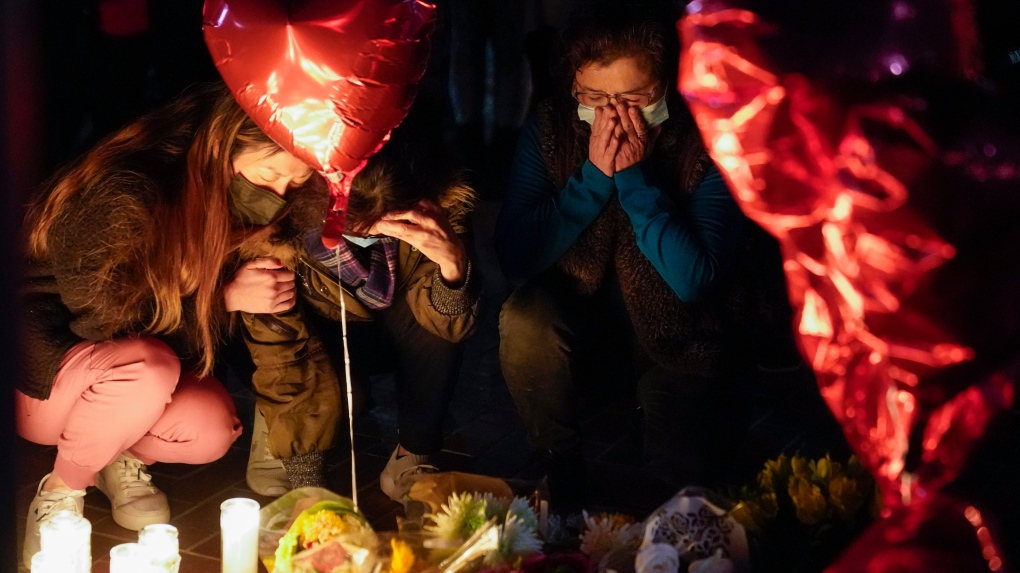 Women pause at a memorial at a vigil honoring the victims of a shooting at the Star Ballroom Dance Studio on Monday, Jan. 23, 2023, in Monterey Park, Calif. (AP Photo/Ashley Landis)

In a country with more guns than people -- and one emerging from three years of isolation, stress and infighting amid the pandemic -- Americans are beginning 2023 with a steady barrage of mass slaughter.

Eleven people killed as they welcomed the Lunar New Year at a dance hall popular with older Asian Americans. A teen mother and her baby shot in the head in an attack that killed five generations. A 6-year-old shooting his first-grade teacher in the classroom. The list goes on.

"We've been through so much in these past few years, and to continue to see case after case of mass violence in the media is just overwhelming," said Apryl Alexander, an associate professor of public health at the University of North Carolina at Charlotte. "When does this stop?"

The carnage over eight days in California, where the dance hall victims Saturday night were among two dozen people killed in three recent attacks, brought painful reminders to families of last year's school shooting in Uvalde, Texas. On Tuesday, several Uvalde families and parents traveled more than three hours to their state's Capitol to renew calls for tighter gun laws, even if they have little chance of winning over the Republican-controlled Legislature.

"People are dying every day. This shouldn't be happening," said Veronica Mata, whose 10-year-old daughter Tess was among the 19 children and two students slain in Uvalde. "If it takes us coming every week, then we are going to do it until we see something change."

Americans have come to endure mass shootings in churches and grocery stores, at concerts and office parks, and inside the homes of friends and neighbors. The violence is blamed on hatred toward other communities, grievances within a group, secrets within families and bitterness among colleagues. But it often ends when a man with a grudge grabs a gun.

Sometimes, it's not clear whether a grudge is even part of the equation.

"There was no apparent conflict between the parties. The male just walked in and started shooting," Yakima Police Chief Matt Murray said after three people were shot dead at a Circle K convenience store in Washington state early Tuesday, adding to the national grief.

Gun sales in the U.S. hit historic highs as the coronavirus pandemic took hold, the economy stalled and people took to the streets to protest police brutality and racial injustice. Nearly 23 million firearms were sold in 2020, according to industry analysts. The surge largely continued the following year, with sales spiking 75% the same month that a mob attacked the U.S. Capitol, before dipping to about 16 million this year.

Experts believe there are 393 million guns in private hands across the United States, which in 2022 was a country of 333 million people.

Some Americans say they don't feel safe anywhere. A third avoid certain places as a result, according to the American Psychological Association, whose most recent study shows that the majority of Americans feel stressed.

Yet there seems little appetite to address some of the potential solutions, such as teaching conflict resolution skills in schools or re-examining our societal views of masculinity, according to Alexander.

"Socioemotional learning is just teaching kids how to identify their feelings, how to express themselves, how to navigate conflict -- and why is there a ban on that, especially during this particular moment?" she asked, referring to efforts to impose state and local bans on school curricula.

"These kids are going to turn into adults," Alexander said. "If they don't know how to handle conflict, we're going to see unfortunate events like this happen."

In 2022, the United States marked its first deadly gun rampage of the year on Jan. 23 -- a year ago Monday. By that same date this year, six mass killings have claimed 39 lives, according to a database of mass killings maintained by The Associated Press, USA Today and Northeastern University.

The bloodshed began Jan. 4, when a Utah man, investigated but never charged over a 2020 child abuse complaint, shot and killed his wife, her mother and their five children before killing himself.

The database shows 2,793 people have lost their lives in mass killings -- those that involve four or more victims, excluding the killer -- since 2006. The recent wave of violence follows a spike in 2022, when the U.S. recorded 42 mass killings, the second highest tally in that time span.

Even gun violence that takes fewer lives, or none at all, can shock the conscience.

That was the case in Virginia this month when the 6-year-old shot and wounded his teacher in front of his classmates. Virginia Beach Mayor Phillip Jones said he could barely wrap his head around it. And two teenage students were killed Monday in a school shooting in Iowa.

In the Saturday night shooting in Monterey Park, 11 people died and nine others were injured when a 72-year-old man opened fire at the Star Ballroom Dance Studio just hours after tens of thousands of revellers filled the streets nearby for Lunar New Year festivities. The gunman took his own life as police approached his van the next day.

Before people across the state could process that horror, seven farmworkers were shot and killed near San Francisco, in the picturesque coastal community of Half Moon Bay. A 66-year-old coworker is in custody.

"In the end, there are simply too many guns in this country. And there has to be a change. This is not an acceptable way for a modern society to live and conduct its affairs," San Mateo County Board of Supervisors President Dave Pine said Monday, in the wake of the mushroom farm shootings. "Our hearts are broken."

For some, the violence is linked to an alienating period in U.S. history that has isolated people from each other and chipped away at the ability to cope with life's travails.

"The pandemic has amplified and accelerated so many dangerous trends. We are experiencing a social recession that's literally bankrupting our souls," said the Rev. Jonathan Lee Walton, the president of Princeton Theological Seminary. He noted the decline in religious and civic participation.

"We are normalizing diseases of despair like loneliness, addiction, and gun violence," Walton said. "Social media, Zoom church, remote work, and virtual reality may be `convenient,' but they are morally anemic substitutes for human connection."

Associated Press reporters Paul Weber and Acacia Coronado in Austin and Lindsay Whitehurst in Washington contributed to this report.