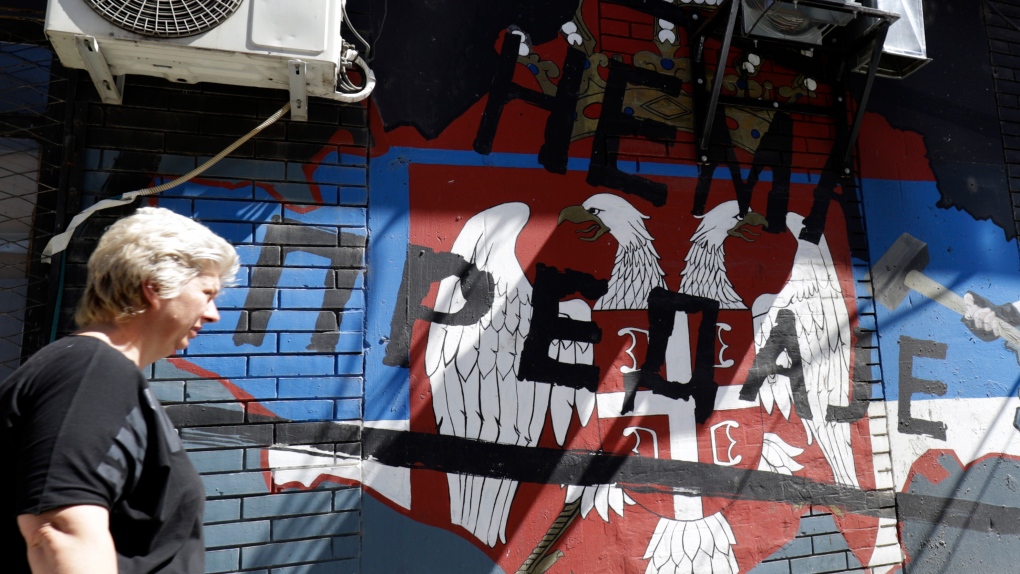 A woman walks in front of a graffiti that shows maps of Kosovo and Serbian coat of arms and flag, that reads: ''No surrender!'', in northern, Serb-dominated part of ethnically divided town of Mitrovica, Kosovo, Wednesday, Aug. 17, 2022. (AP Photo/Bojan Slavkovic)
BRUSSELS -

NATO will increase its peacekeeping force in Kosovo if there is an escalation of tensions with neighboring Serbia, the alliance's chief said on Wednesday, on the eve of EU-facilitated talks between the estranged western Balkan neighbors.

"We have now a significant mission, a military presence in Kosovo close to 4,000 troops," Jens Stoltenberg told a news conference after talks with Serbian President Aleksandar Vucic in Brussels, who stood alongside him.

"If needed, we will move forces, deploy them where needed and increase our presence. We have already increased the presence in the north. We are ready to do more."

Tensions between Serbia and Kosovo flared this month when Pristina said it would oblige Serbs living in the north, who are backed by Belgrade and do not recognize Kosovo institutions, to start using car license plates issued in Pristina.

The situation calmed after Kosovo Prime Minister Albin Kurti, under U.S. and European Union pressure, agreed to postpone the number plates rule until Sept. 1 and NATO peacekeepers oversaw the removal of roadblocks set up by Serbs.

However, Vucic told the news conference at NATO that talks with Kurti on Thursday, which will be facilitated by the EU, would be difficult because the two sides disagree on almost everything.

"The threats, risks and challenges that NATO faces in the current security environment are felt by our country as well," he told reporters, linking the problems to Russia's influence.

"Kosovo's institutions and citizens in the current situation have reason to be vigilant about (the) destructive approach of our northern neighbor towards Kosovo and the region in general under Russia's detrimental agenda for Europe and the Balkans."

Kosovo won independence from Serbia in 2008, almost a decade after a guerrilla uprising against repressive Belgrade rule.

Serbia legally still considers Kosovo an integral part of its territory. It denies whipping up tensions and conflict there, and accuses Pristina of trampling on the rights of minority Serbs. Ethnic Serbs account for 5 per cent of Kosovo's 1.8 million population, which is 90 per cent ethnic Albanian.

Vucic said Serbia wanted to avoid any escalation of the situation, but it was important to understand that there is "a new generation of young men" who see Kosovo as Serbian territory and will no longer "put up with the terror."

Quebec's major party leaders made their final appeals to voters Sunday as residents across the province prepare to cast their ballots on Oct. 3. Polls are open from 9:30 a.m. to 8 p.m. Eastern time Monday. During that time, Quebecers will endorse or condemn their leaders' conduct during major language law overhauls, existential questions on provincial identity, and of course, the pandemic.

Brazil's top two presidential candidates will face each other in a runoff vote after neither got enough support to win outright Sunday in an election to decide if the country returns a leftist to the helm of the world's fourth-largest democracy or keeps the far-right incumbent in office..