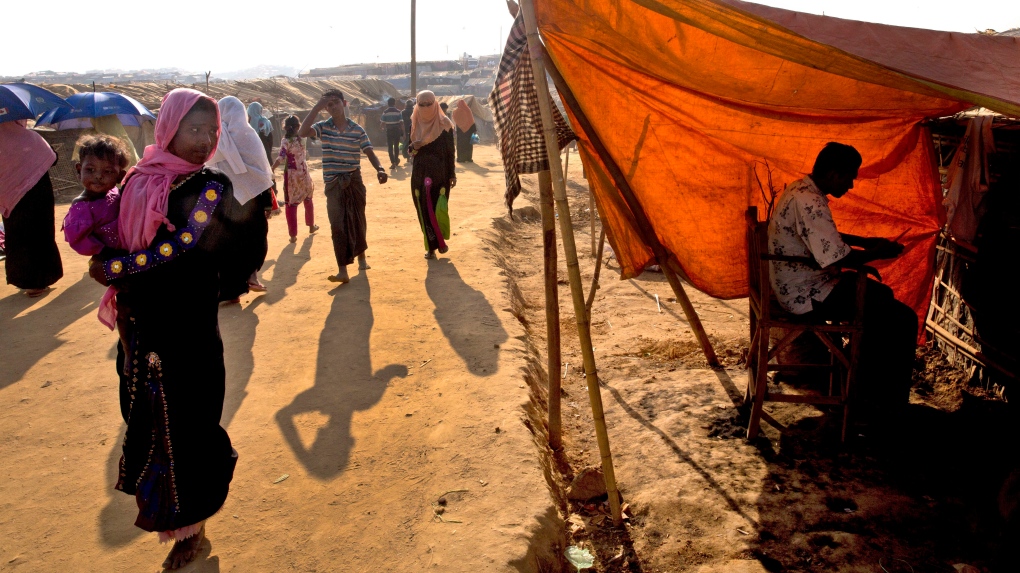 A Rohingya barber sits in his makeshift roadside shop as others walk past at Kutupalong refugee camp near Cox's Bazar, Bangladesh, Thursday, Jan. 18, 2018. (AP Photo/Manish Swarup)

The Kachin state police office said the tribunal handed down the sentence Friday after finding the soldiers guilty of killing three ethnic Kachin civilians in September. The prosecution came after an internal investigation by the military.

Min Zaw, a Kachin state police officer, said that during the hearing the six confessed that they were responsible for the killings.

Kachin state is home to an ethnic rebel army that has been fighting the Myanmar military for more than seven years. More than 100,000 people have fled the fighting and live in refugee camps.

The three civilians were among a group of five detained by soldiers last May while they were heading back to their refugee camp after gathering firewood near Hka Pra Yang village. Two of the men were released and returned to the camp, while the bodies of the other three were found in a shallow grave three days later.

Rights groups said the prosecution of the six soldiers was rare and the first step down a long road to ending military impunity. Still they raised concerns about the trial being held behind closed doors.

"There's a good reason for the military to keep these trials behind closed doors. It makes it a lot easier to cover up widespread and systematic abuses," said David Baulk, Myanmar human rights specialist for Fortify Rights.

Myanmar's military has been accused of violating human rights with impunity for decades, including in its conflicts with rebel groups.

Most recently it has been accused of abuses during what it calls "clearance operations" against ethnic Rohingya Muslims in Rakhine state. More than 650,000 Rohingya have left Myanmar for Bangladesh, fleeing what the United Nations calls ethnic cleansing.

Myanmar's military last week made a rare public admission of killing 10 Rohingya Muslims whose bodies were found in a mass grave in a village in northern Rakhine.