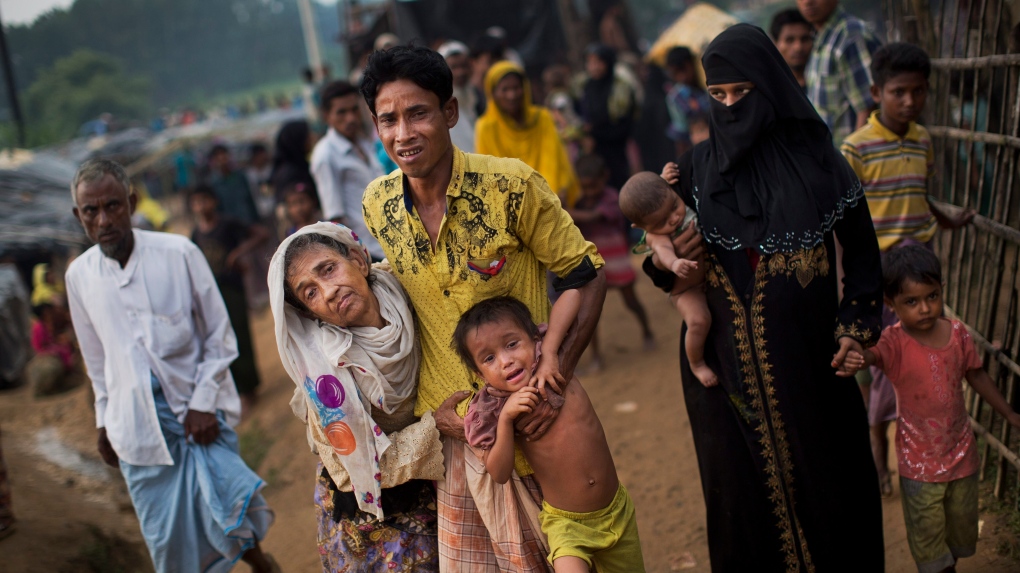 An exhausted Rohingya helps an elderly family member and a child as they arrive at Kutupalong refugee camp after crossing from Myanmmar to the Bangladesh side of the border, in Ukhia on Sept. 5, 2017. (AP Photo/Bernat Armangue)

DHAKA, Bangladesh - Rohingya refugees are continuing to flee from Myanmar into Bangladesh, even after the two countries said they will begin repatriating members of the minority ethnic group next week, a Bangladesh official said Friday.

Over 650,000 Rohingya Muslims poured into Bangladesh after Myanmar's military launched a brutal crackdown against them in August.

More than 100 Rohingya have entered Bangladesh in the past two days, according to Mohammed Mikaruzzaman, a top official in Bangladesh's Ukhiya sub-district, where the refugees are living in sprawling camps.

Mikaruzzaman would not say why the latest refugees fled, but the Bangladeshi media has said some reported being forced by the Myanmar military to work without pay and food. The Associated Press could not independently verify those allegations.

Myanmar and Bangladesh signed an agreement in November on repatriating Rohingya refugees, and officials said earlier this week that some would return to Myanmar beginning next Tuesday. The process is expected to take about two years.

However, it's unclear if there will be more than a handful of symbolic repatriations. Mikaruzzaman said very few preparations had been made.

"I have visited some border points to see the possible routes for repatriation over last few days, but we have not finalized anything yet," he said, calling it a "huge task" to co-ordinate among government departments, international agencies and the Rohingya.

Many Rohingya have expressed fears about going back to Myanmar.

A statement issued Thursday by nearly two dozen Rohingya organizations around the world demanded security guarantees for the refugees and their property before they return. The statement said there had been "no change of attitude of the Myanmar government and its military toward Rohingya."

Under the November agreement, Rohingya will need to provide evidence of their residency in Myanmar in order to return - something many do not have.

Rohingya Muslims are denied citizenship in Myanmar, along with many basic rights, though many have lived in the predominately Buddhist country for generations. They are widely seen as illegal migrants from Bangladesh.

In Myanmar, a top official insisted the repatriations would begin as planned, with the paperwork for the first 1,100 refugees already finished in both countries.

"These refugees can be sent on Jan. 23 because they are already verified to come back," said Win Myat Aye, the minister of social welfare, relief and resettlement.

Rohingya began fleeing to Bangladesh when Myanmar's military launched a crackdown after a militant group attacked police posts. Myanmar's army described it as "clearance operations" against "terrorists," but the United Nations and the U.S. have called it "ethnic cleansing."