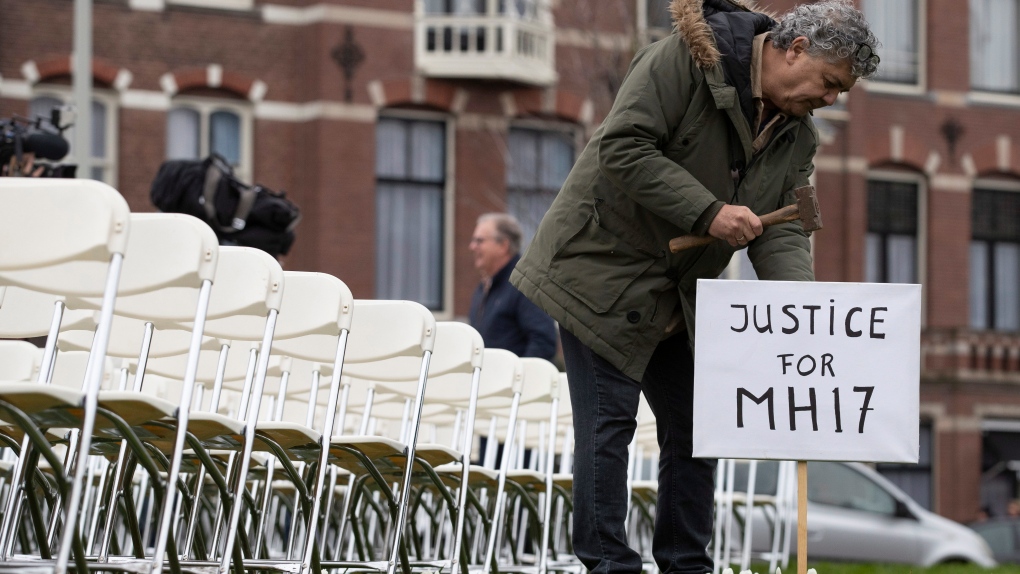 Rob Fredriksz, who lost his son Bryce and his girlfriend Daisy, places a sign next to 298 empty chairs, each chair for one of the 298 victims of the downed Malaysia Air flight MH17, placed in a park opposite the Russian embassy in The Hague, Netherlands, Sunday, March 8, 2020. A missile fired from territory controlled by pro-Russian rebels in Ukraine in 2014, tore the MH17 passenger jet apart killing all 298 people on board. United by grief across oceans and continents, families who lost loved hope that the trial which starts Monday March 9, 2020, will finally deliver them something that has remained elusive ever since: The truth. (AP Photo/Peter Dejong)

THE HAGUE, NETHERLANDS -- The families of people killed when a missile shot down Malaysia Airlines Flight 17 over eastern Ukraine in 2014 set out 298 white chairs outside the Russian Embassy on Sunday in a silent protest against Moscow's lack of co-operation in the investigation into the downing of the passenger jet.

The chairs -- laid out in rows like seats in an airplane -- represented the victims who died when a Buk missile fired from territory held by pro-Russia separatist rebels shot down the Amsterdam-to-Kuala Lumpur flight on July 17, 2014, killing everybody on board.

The families stood in silence for two minutes after arranging the chairs and signs including one that read: "Impunity

unacceptable! Someone knows what happened ... Justice for MH17."

The protest came on the eve of a Dutch trial for three Russians and a Ukrainian charged with murders for their alleged roles in the missile strike.

Russia denies involvement and has dismissed the international investigation that led to the four suspects being charged, saying it is prejudiced against Moscow.

Relatives accuse Russian authorities of seeking to hide the facts about exactly what happened.

Piet Ploeg, who lost his brother, Alex, his sister-in-law and his nephew, said families weren't accusing Russia of downing the Boeing 777.

In Moscow, Foreign Ministry spokeswoman Maria Zakharova accused investigators of presuming Russia's guilt before the court hearing opens Monday and launching a "media campaign" to support the case and whitewash alleged gaps in the evidence.

Families are convinced Russia knows -- and is blocking -- the truth.

"What we're doing here today, this is truly us making a silent statement to somebody who may have the answers," said Lucas Schansman, whose nephew Quinn -- a joint Dutch-American citizen -- was among the dead.

Neither Russia nor Ukraine extradites its citizens. Russia and pro-Russia separatists continued to deny involvement, even after prosecutors alleged that the Buk missile system which destroyed the passenger plane was transported into Ukraine from the Russian 53rd Anti-Aircraft Missile Brigade's base in Kursk and the launching system was then returned to Russia.

The Joint Investigation Team last year named four suspects: Russians Igor Girkin, Sergey Dubinskiy and Oleg Pulatov as well as Ukrainian Leonid Kharchenko. None of them is expected to attend the start of the trial Monday in a courtroom near Schiphol, the Amsterdam airport from which the doomed flight took off.

The team examined the wreckage and body parts, questioned witnesses and experts, studied radar and satellite images and analyzed data and intercepted communications before indicting the four suspects.

Investigators said last year there was "almost daily telephone contact" between the self-proclaimed leaders of the pro-Russia rebel Donetsk People's Republic "and their contacts in the Russian Federation" using secure phones provided by the Russian security service."

The five nations that make up the international team -- Australia, Belgium, Malaysia, Ukraine and the Netherlands -- signed a deal Sunday extending their co-operation.

"The prolongation ensures the investigation into the downing of MH17 continues unabated and in parallel with the trial of the four suspects," Dutch prosecutors said in a statement.

Families are hoping the trial, expected to last for more than a year, will shed definitive light on exactly what happened.

"The really important thing is that the truth comes out, because the truth has been in short supply over the last five and a half years," said Jon O'Brien, who flew to the Netherlands from Sydney, Australia, with his wife Meryn to watch the trial. Their son, Jack, was among those killed on MH17.