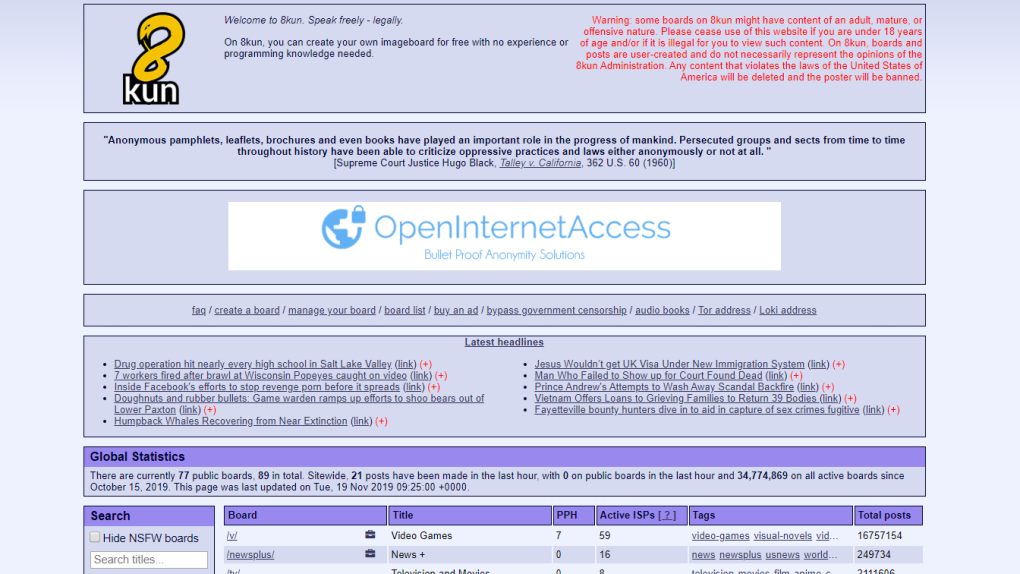 TORONTO – The controversial forum website 8chan, which is now online as 8kun, used to invite its users to “embrace infamy.”

Then it was deplatformed in the wake of the El Paso shooting, and a series of network providers have since terminated their service with the site, citing the toxic, barely-moderated content that flourished there.

Jim Watkins, the current owner of 8chan/8kun, was summoned to testify in September by the Committee on Homeland Security, to “answer questions on the site’s extremist content.”

Before testifying, Watkins was steadfast that the website would continue to be a bastion of free speech, but after the closed-door Congressional hearing, he ended up vowing to implement changes, including security measures like locking a message board if the content is flagged as illegal or indicates a violent act is to be carried out.

What followed was the continuation of a very public battle for 8chan to return to the mainstream internet, as Fredrick Brennan, the original creator of 8chan but who is no longer affiliated with the site, wages a continuing campaign to keep pulling the site offline.

Brennan’s not alone – he’s had help. Canadian help, as it turns out.

A Canadian web developer and self-described ‘crypto bro’ who goes by the username L33T GUY online, has been working in tandem with Brennan to keep 8chan offline and to raise public awareness of the site he describes as “the incubator for the next mass shooter.”

CTVNews.ca has agreed not to use L33T GUY’s legal name due to his fear of reprisals.

“I started getting interested in 8chan in 2014 during the Gamergate controversy, I was interested in it as a phenomenon,” L33T GUY told CTVNews.ca in a telephone interview.

L33T GUY says he reached a turning point over 8chan at the time of the mosque shooting in Christchurch, New Zealand.

“I was online when it happened,” he said. “I saw it play out live on 8chan… Christchurch spilled over to real life.”

The attack on the mosques in Christchurch in March was livestreamed and the footage was accessible online for hours before tech companies began removing it en masse.

Five months later after the El Paso shooting, L33T GUY said he reached out to Brennan, who had not been involved with the site since 2016 but whose name was being “dragged through the mud” at the time. The two men have been working together ever since.

Using 8chan’s reputation against them, L33T GUY, Brennan and a host of other volunteers have been on the case for every network provider switch and domain name swap, emailing each successive company to inform them of the type of website they’re hosting.

“We email their abuse department, explain that there have been terrorist manifestos on 8chan and list providers who have denied them service,” L33T GUY said, adding “we’re using 100 per cent legal methods” to take the site down.

“8chan is known for rampant neo-Nazism, swastikas all over the boards, holocaust denialism, this isn’t going to change,” L33T GUY said, explaining that his message to the service providers is simple: “you can be on the right or wrong side of this.”

Both Brennan and L33T GUY meticulously document their investigation of /8chan/8kun’s movement from network to network, and share details of their activities on Twitter.

Currently, 8chan/8kun is “hiding out in a known malware network” in Russia, L33T GUY said, adding that Canadian company Tucows is allegedly “controlling the domain 8kun.net,” something he and Brennan have been challenging them on publicly.

L33T GUY said he’s highly motivated to ensure the site remains inaccessible, as he is “almost certain it will be the incubator for the next mass shooter.”

Brennan, who created 8chan in 2013, partly as a technical demo of software and partly to replace forum site 4chan, said he never expected the site to become popular.

“8chan became very popular in 2014 and then Jim Watkins entered the picture,” he said in a Skype interview from his current residence in the Philippines on Monday.

Watkins financed Brennan’s move from the United States to the Philippines after he agreed to hand over 8chan, he said.

“The thing about Jim Watkins is, there was so much that I didn’t understand when I first met the guy, he has a history of taking over websites and then the founders of those websites getting very angry at him,” Brennan told CTVNews.ca.

After Watkins took over as owner of 8chan, Brennan stayed on as an administrator until he cut all ties in 2016. During his time working on the site, Brennan alleged he witnessed the culture Watkins fostered there including a minimum of content moderation and the relaxation of security measures.

Brennan alleged during that time 8chan users “were smart enough to not post wishes of violence, or incitement to violence” because the site “logged everybody’s IPs and we made that very clear.”

IPs, or Internet Protocol addresses, are the unique identifiers that can reveal where internet-connected devices are located as well as the network they are connected to.

Brennan alleged after a hack of the site in 2017, current 8chan administrator Ronald Watkins, who is the son of Jim Watkins, “disabled that feature and stopped logging IPs” which may have “emboldened some users to start becoming more radical.”

And when Ronald Watkins made new software for 8chan, Brennan said a lot of the code was open sourced, meaning he could see that the “sunshine system” software for saving IPs in case they’re needed by “the FBI and other law enforcement agencies” had been disabled.

“If you look at the archives [of 8chan] you can see they kind of stopped working with law enforcement in the U.S.,” Brennan alleged, citing the lack of data retention laws in America as potentially having an “impact on what users were posting while they were on 8chan.”

The law concerning free speech in the U.S., known as the First Amendment, was another ideology that Brennan and Jim Watkins disagreed on.

“Watkins looks at the law differently than I do,” Brennan explained, alleging that Watkin's "favourite case" is Brandenburg versus Ohio, which is a Supreme Court ruling that "says basically that you need to be a direct, imminent threat for your speech to be illegal.”

Brennan said that Watkins interprets that case “very strictly,” unlike himself, who was “much more loose” about its implementation when he was 8chan’s administrator.

Although he understood the U.S. Supreme Court ruling, Brennan “didn’t think that there was any benefit to us for allowing users to post that they want to kill… It might be technically legal in a court of law, but I just felt like it was too much of a risk,” he said.

“To say ‘I want to kill Muslims,’ that’s legal. To say that ‘I think somebody should go bomb the capitol’ – also legal. To say that ‘somebody should kill this president’ even crazy stuff like that you would think ‘that has got to be illegal,’ it’s legal. The only thing that is illegal is if you post a direct imminent threat or plan ‘I am going to go shoot up a mosque, here are pictures of my weapons,’” he said.

Brennan said Jim and Ronald Watkins may agree with his stance now – but he says they didn’t appear to during the shootings, noting that “embrace infamy” was left up on the front page of the site even after the Christchurch, Poway and El Paso shootings.

The moderation of 8chan’s content has been a hot-button debate topic in recent years, as internet watchdogs, governments and advocacy groups continue to challenge the protocols, or lack thereof, of tech companies when it comes to moderating and removing toxic content from social media.

Brennan said the whole tech industry is “reactive, not proactive” in regards to moderation.

“All moderation – almost all in these tech companies – is reactive… YouTube for example, very little of what they do is proactive, maybe during a major emergency like the Christchurch shooting, they installed some proactive filters… but the degree of those filters working is debatable,” he said.

It was no different with 8chan and Watkins, he alleges.

“When he [Watkins] explained his philosophy of moderation to me, being reactive was a strong part of that, he felt it helped him legally to not know what was going on on his site and only react when he got a report,” Brennan said, alleging that volunteer moderators would have to self-report child pornography on the site, for instance, to get around Watkins’ directive.

Brennan said, since the El Paso shooting in August, he has made it clear that he does not have anything to do with the site and its current owners, and his work to keep the site offline alleviates some of his regret over giving the site to Watkins.

“It doesn’t make any money for him, the only thing it brings him is notoriety… Jim Watkins really enjoys that. He enjoys being the free speech martyr,” Brennan said.

The relationship between the Qanon conspiracy and 8chan

Part of that notoriety is what Brennan calls the parasitic partnership between 8chan/8kun and the so-called Qanon conspiracy.

The ideas of Qanon theorists, who believe there is a “deep state” plot against current U.S. President Donald Trump, have been included in a list of conspiracy theories that are ”very likely [to] motivate some domestic extremists to commit criminal, sometimes violent activity,” according to an FBI report.

Prior to its rebirth as 8kun, there was a prominent ”Q” board on 8chan, where the supposed anonymous ringleader of the conspiracy would post content.

L33T GUY and Brennan both pinpointed the “Q board” on 8chan as a major source of internet traffic and therefore of value to Watkins.

“Conspiracy traffic is a golden demographic to have,” L33T GUY said. Brennan agrees.

“When Jim Watkins went to testify, he put a Q pin on his shirt, so he definitely recognizes how important Q is to 8chan’s future. I don’t think they have a future without Q,” Brennan said.

Brennan alleges that Jim and Ronald Watkins may even be posting as Q, as he says they have access to the password or tripcode for the account in 8chan’s servers. And even if they’re not, Brennan says their backdoor access means “whoever is posting as Q can be usurped at any time by Jim and Ron.”

“The fact that Q is so tightly tied to 8chan, leads to questioning not only if Q is real, duh he’s not,” said Brennan. “But the Q believers need 8chan and that’s the only reason they’ve stuck around for so long and Jim needs them too, so it’s this perfect parasitic relationship.”

L33T GUY says the fact that the Q board “is making bank and extorting their base” is a “massive red flag that this is a grift.”

The future of 8chan

"After the hack in 2017, we changed the openib [sic] software to using hashes of IP addresses," Ron Watkins said. "All information about how we hash and use IPs...is in our published privacy policy."

Ron Watkins said that the site currently uses U.S. company Vanwatech as a host, but said how that company routes traffic is "out of his control," and "users should use [a] vpn and ssl always, while security conscious users can also use tor onion routing."

"I don't know the password for the Q tripcode and I am not posting as Q," he continued.

However, both L33T GUY and Brennan have expressed their commitment to continue to “expose” 8chan/8kun and hopefully prevent it from returning to prominence.

“I am going to keep reporting on 8chan until they either find a way to stay online that is totally impervious to my reports, or they give up,” Brennan said. “I don’t see any other arrangement, I feel like I am entrenched.”

“I really believe they are just waiting for the world to look somewhere else,” Brennan warned. “Then they will open /pol back up.”