In U.S. President Donald Trump’s words, North Korean leader Kim Jong Un has gone from heading a “cruel dictatorship” to being “very honourable” over the past few months. To human rights investigators, however, “crimes against humanity have been -- and continue to be -- committed on a massive scale” in Kim’s isolated kingdom.

A Dec. 2017 report prepared by the International Bar Association (IBA) War Crimes Committee called on the international community to investigate crimes against humanity allegedly committed in North Korea’s network of political prisons, which the IBA has likened to a “gulag system.”

Those prisons are home to an estimated 80,000 to 130,000 people, the IBA states. Hundreds of thousands more are believed to have perished in the system, where days are marked by forced labour and food is most always scarce. Prisoners’ crimes, the IBA states, can be as simple as criticizing the Kim clan.

The incarcerated, the IBA report also noted, include family members and even young children of political prisoners due to “North Korea’s longstanding policy of eliminating the ‘seed’ of three generations of ‘class enemies.’”

The allegations in the report, which were drawn in part from personal testimonies of North Korean defectors, contain tales of systematic murder, torture, rape, forced abortions, religious persecution, starvation and overwork leading to death. Some of the more troubling allegations include testimony of a prisoner’s newborn baby being fed to guard dogs, children dying from malnutrition in labour camps and prisoners being executed for foraging for edible wild plants.

“This Inquiry finds evidence that ten of the eleven crimes against humanity… have been, and continue to be, committed,” the IBA report states. “The ten relevant crimes are: (1) murder; (2) extermination; (3) enslavement; (4) forcible transfer; (5) imprisonment; (6) torture; (7) sexual violence; (8) persecution; (9) enforced disappearances; and (10) other inhumane acts.”

As head of state of North Korea, Kim, the report concluded, is “liable for crimes against humanity” because of “a long-established form of liability under customary international law that holds superiors responsible for the criminal acts of their subordinates.”

North Korea’s government, however, has denied the existence of such political prisons and human rights abuses.

The IBA report came on the heels of a 2014 report from the United Nations’ Human Rights Council, which detailed many of the same crimes, such as “extermination, murder, enslavement, torture, imprisonment, rape, forced abortions and other sexual violence, persecution on political, religious, racial and gender grounds, the forcible transfer of populations, the enforced disappearance of persons and the inhumane act of knowingly causing prolonged starvation.”

The UN report called for the prosecution for those most responsible for the alleged crimes.

“Systematic, widespread and gross human rights violations have been and are being committed by the Democratic People’s Republic of Korea, its institutions and officials,” the UN report concluded. “In many instances, the violations of human rights found by the commission constitute crimes against humanity… The gravity, scale and nature of these violations reveal a State that does not have any parallel in the contemporary world. ”

Trump, however, is not expected to raise such human rights concerns in his impending summit with Kim. 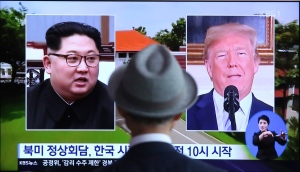 Trump and Kim's handshake analyzed around the world

What Kim's suit, shoes and hairstyle tell us about him

From 'madman' to 'honourable': The many things Trump has said about Kim Jong Un

At Trump-Kim summit, human rights is a back-burner issue

Dennis Rodman arrives in Singapore ahead of Trump-Kim summit