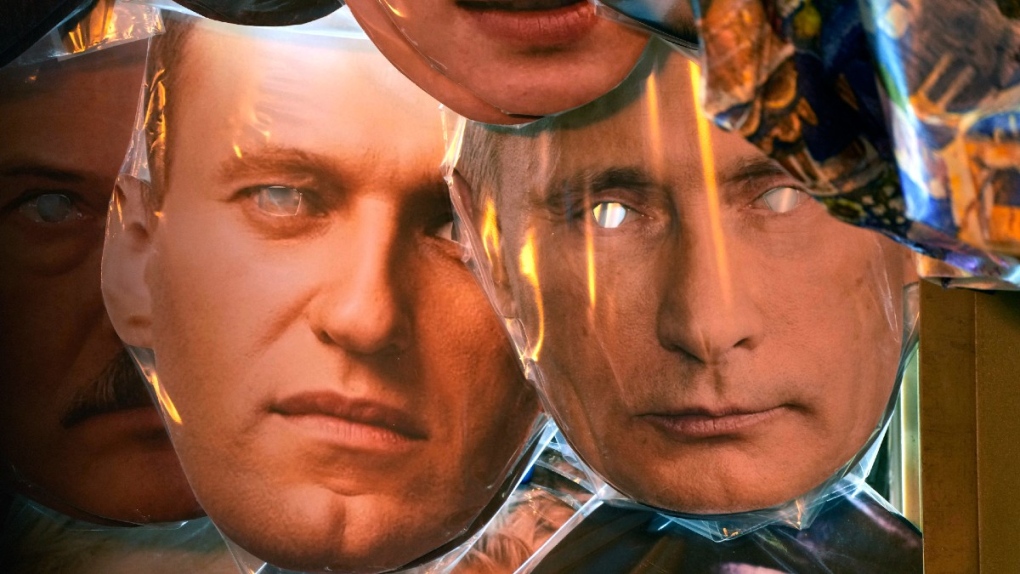 BRUSSELS -- Imprisoned Russian opposition leader Alexei Navalny, who narrowly survived a poisoning that he blames on the Kremlin, was awarded the European Union's top human rights prize Wednesday in a clear slap at President Vladimir Putin.

In awarding the Sakharov Prize to Navalny, the European Parliament praised his “immense personal bravery.” The 45-year-old activist fell ill from a nerve agent poisoning last year and recuperated in Germany, then was promptly arrested upon his return to Moscow and later imprisoned.

“He has campaigned consistently against the corruption of Vladimir Putin's regime, and through his social media accounts and political campaigns, Navalny has helped expose abuses and mobilize the support of millions of people across Russia. For this, he was poisoned and thrown in jail,” parliament President David Sassoli in a statement.

Sassoli called for the immediate release of Navalny, who is Putin's biggest domestic foe.

There was no immediate reaction to the award from the Kremlin, which denies any involvement in Navalny's poisoning.

The recognition of Navalny will further sour relations between the 27-nation bloc and Russia. These ties have been on the decline for years, especially following Moscow's 2014 annexation of Ukraine's Crimean Peninsula and its support for a separatist insurgency in eastern Ukraine.

The impact reverberated beyond the EU as well.

Days after Russia suspended its mission at NATO and ordered the closure of the alliance's office in Moscow in retaliation for NATO's expulsion of Russian diplomats, the organization's chief said he embraced the news.

“I welcome the fact that a strong voice ... in Russia has been awarded this prize,” NATO Secretary General Jens Stoltenberg said, adding that the prize also was a call for “his unconditional release from prison” and to have an international investigation into it.

Stoltenberg recalled that NATO considered the treatment of Navalny as part of a “pattern where we see that Russia has become more oppressive at home and more aggressive abroad.”

Russia's treatment of Navalny has only exacerbated matters. The EU has been calling for his immediate and unconditional release in what it sees as a politically motivated imprisonment and has said it holds Moscow responsible for his health.

The EU imposed sanctions last year on six senior Russian officials for their alleged involvement in the poisoning of Navalny.

With the standoff between Brussels and Moscow continuing, the move by European legislators in awarding the prize to Navalny put it back at the heart of the political debate.

“It is an important signal, also to the Kremlin, that the EU will not give in to pressure and blackmail or be fooled by empty promises,” said Sergey Lagodinsky, a Greens/EFA MEP from Germany.

Navalny's top associate Leonid Volkov said the prize showed that hundreds of lawmakers from different countries and parties had reached a consensus that the fight against corruption is an issue for all of Europe and that Navalny is “political prisoner No. 1 in the world and Putin's personal captive.”

“Europe understands that we are fighting to make Russia a normal European country, which it will become, and supports it,” he said in a post on Facebook.

Ruslan Shaveddinov, another member of Navalny's team, told The Associated Press that “Russian authorities may want this to be forgotten as soon as possible, but we see that European politicians believe that this issue is important and send quite a clear message that no one forgot and that they demand Alexei Navalny's release.”

He said Navalny's associates will do everything possible to win his freedom, and will continue their anti-corruption investigations, political and public campaigns and protests.

EU foreign policy chief Josep Borell tweeted that the prize is a recognition of Navalny's “commitment to defending democracy in Russia, at great personal cost,” adding that the EU wants his “immediate and unconditional release.”

Awarding the prize to Navalny “will keep his name in the news,” which is a priority for his supporters, said Ben Noble, associate professor of Russian politics at University College London.

It's unlikely to improve his conditions in prison or help his position “as it currently stands,” added Noble, co-author of “Navalny: Putin's Nemesis, Russia's Future?”

He told AP that one worrying implication is that the award “could have a negative effect - that this adds to Moscow's narrative of foreign interference, of what they claim is a concerted Western attempt to interfere in the country's domestic affairs.”

The 50,000-euro ($58,200) prize will be presented at the Dec. 15 session of the European Parliament in Strasbourg, France. Other candidates had included a group of Afghan women, and imprisoned Bolivian politician and former interim President Jeanine Anez.

The Afghan women, who include human rights activists, a journalist and cultural figures, had also been strong contenders. The fate of Afghan women has taken center stage since the Taliban took power in the wake of the U.S. military departure from the country in August.

Despite initial promises to protect the rights of women, especially in education, the Taliban have come under criticism, including from the United Nations, for not sticking to those commitments.

The EU award, named for Soviet dissident Andrei Sakharov, was created in 1988 to honor individuals or groups who defend human rights and fundamental freedoms. Sakharov, a Nobel Peace Prize laureate, died in 1989.

It was the second straight year it has gone to those challenging authoritarian leaders. Last year, it went to the Belarus opposition movement and its leader, Sviatlana Tsikhanouskaya, for their challenge to President Alexander Lukashenko's rule following a widely disputed election in 2020.

This version corrects the euro-dollar conversion rate, with 50,000 euros the equivalent of about US$58,200.