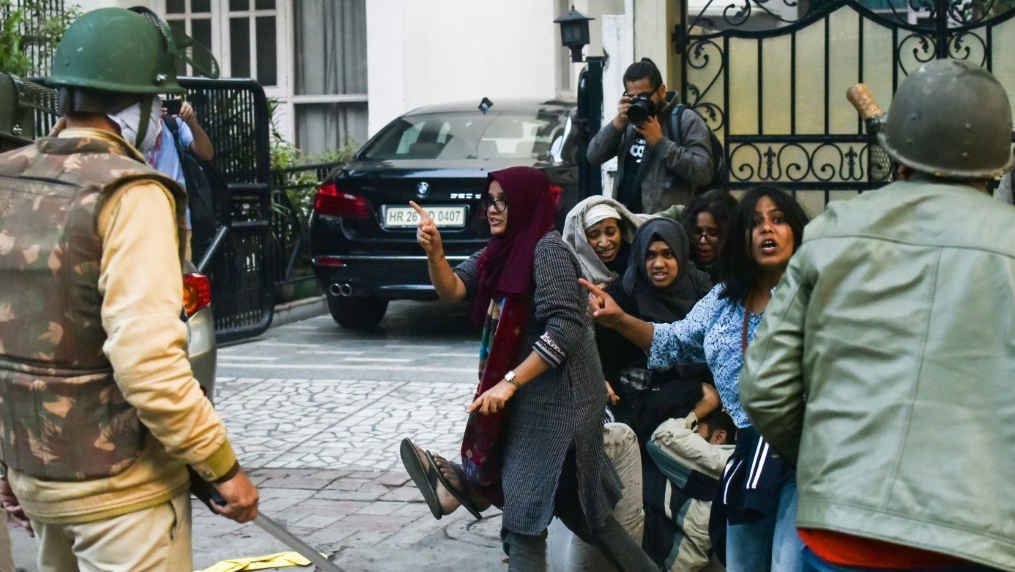 History student Ayesha Renna (red scarf) and three women have become protest symbols after they surrounded a young man to stop him from being beaten by police. AFP

NEW DELHI, INDIA -- A group of Muslim women who formed a barricade around a male student being attacked by baton-swinging police have become symbols of the protests currently gripping India.

In a video that has gone viral, the four young women rush to surround the young man as police in riot gear thrash at him with six-foot (two-metre) bamboo sticks known as "lathi."

They then point their fingers at the officers and shout "police go back, go back" during the incident in New Delhi on Sunday.

The protests, which raged for another day on Tuesday, follow the passing by parliament last week of legislation making it easier for people from three neighbouring countries to get Indian citizenship.

Excluded though are Muslims, in what Islamic groups, the opposition and rights groups say is part of Prime Minister Narendra Modi's agenda to remould India as a Hindu nation, something he denies.

The women from Sunday's incident have since been interviewed by myriad media, while the finger-wagging image is being used for protest posters and a Chennai artist's illustration that has spread widely online.

"We don't have any fear of this government, the police or anyone," one of the women, history student Ayesha Renna, 22, told an Indian television channel.

The clashes on Sunday night, which saw vehicles torched and Delhi security forces storm a university, have sparked anger about alleged police brutality, adding fuel to the protests.

"Students have the right to protest. Violence against peacefully protesting students cannot under any circumstance be justified," rights group Amnesty International said on Monday.

Jamia Millia Islamia university vice-chancellor Najma Akhtar said Monday that 200 people were injured but police put the number at 39 students and 30 officers hurt -- one of them critically.