Chaos and looting in Los Cabos as electricity, water out 3 days after Odile 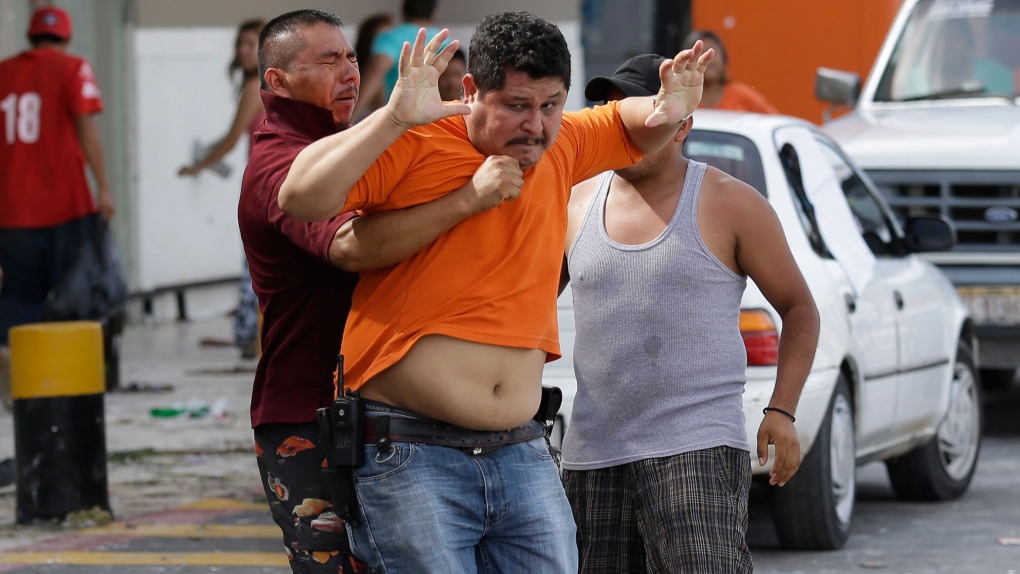 A man, center in orange, tries to prevent another one from storming a supermarket in Los Cabos, Mexico, Tuesday, Sept. 16, 2014. (AP / Victor R. Caivano)

SAN JOSE DEL CABO, Mexico -- Desperate locals and tourists were in survival mode in the resort area of Los Cabos on Wednesday, with electrical and water service still out three days after Hurricane Odile made landfall as a monster Category 3 storm.

Looters stripped supermarkets of their food and other products, with some people fighting over goods. At least one supermarket decided to give away its merchandise. People pushed shopping carts full of goods that at times clogged the highway.

Mexico's government continued to fly stranded tourists out of the area as the remnants of Odile drenched the northern state of Sonora and headed on a path forecast to take the rain into Arizona overnight.

The U.S. National Hurricane Center said parts of Arizona and New Mexico could get 15 to 23 centimetres of rain and warned of possible flash flooding. The Tucson area was forecast to bear the brunt of the storm, but Phoenix could be lashed with rain and heavy winds, too.

To the south, a new tropical storm was nearing hurricane strength off Mexico's Pacific coast and headed in the general direction of Los Cabos, although early predictions were for the centre to remain offshore.

President Enrique Pena Nieto's office said the federal government was working closely with state authorities on relief efforts in the areas battered by Odile, including restoring water and electricity.

It said more than 239,000 people had their power knocked out by the storm, but predicted 95 per cent of electrical service would be restored within four days.

In Los Cabos, people helped themselves to food, water, soda and toilet paper at supermarkets and convenience stores. Some loaded pickup trucks with appliances, mattresses or patio furniture.

One market decided to give away its wares. Hundreds of people lined up to get inside for five minutes at a time and take what they could as store employees with machetes, baseball bats and air rifles tried to keep things orderly.

Natascha Ramsey, a homemaker from San Diego, sat outside the store. She came on vacation and was concerned about her child, who woke up Wednesday with a rash. She was running out of supplies.

"I just need to worry about getting food for her," Ramsey told The Associated Press. "We'll be fine, but I need formula, diapers, wipes, stuff to keep the child healthy."

When AP reporters returned later, the store had been emptied.

Long lines formed at tortilla shops and at stores selling ice as people tried to feed themselves and keep what food they had from going bad in the sweltering heat.

Lines also snaked from the couple of gas stations still working. Customers were each limited to 250 pesos' ($19) worth of fuel, about 19 litres.

At the Best Western near Los Cabos airport, guests filled buckets with pool water to flush their toilets.

Some tourists drove their rental cars or hired cabs to head north to La Paz, the Baja California Sur state capital that was hit with less intensity. They hoped they might have a better chance of getting out through the city's airport, but they found frustrated crowds, long waits and little information from authorities.

David Bergman of California said he and his family had been at the La Paz airport for two days.

"It's nothing but lies. We've just been lied to," Bergman said angrily. "There's almost been rioting here two times. ... we were caged like animals."

Tourism Minister Claudia Ruiz Massieu said via Twitter that 5,000 travellers had been flown out since the airlift began Tuesday. Officials estimated that 30,000 travellers were stranded by the storm.

The U.S. hurricane centre said Odile had maximum sustained winds near 45 kph Wednesday afternoon. It was about 200 kilometres west-southwest of Tucson and moving to the northeast near 11 kph.

Tropical Storm Polo was moving up Mexico's Pacific coast with a possible brush by Los Cabos by Sunday, though its centre was projected to stay offshore.

Polo was 265 kilometres west-southwest of Zihuatanejo with maximum sustained winds of 110 kph. It was moving northwest at 19 kph. The centre predicted Polo could become a hurricane by Wednesday night or early Thursday.

Hurricane Edouard, a Category 1 storm in the central Atlantic, was forecast to remain far from land, but swells could cause dangerous surf along parts of the U.S. East Coast north of Florida.