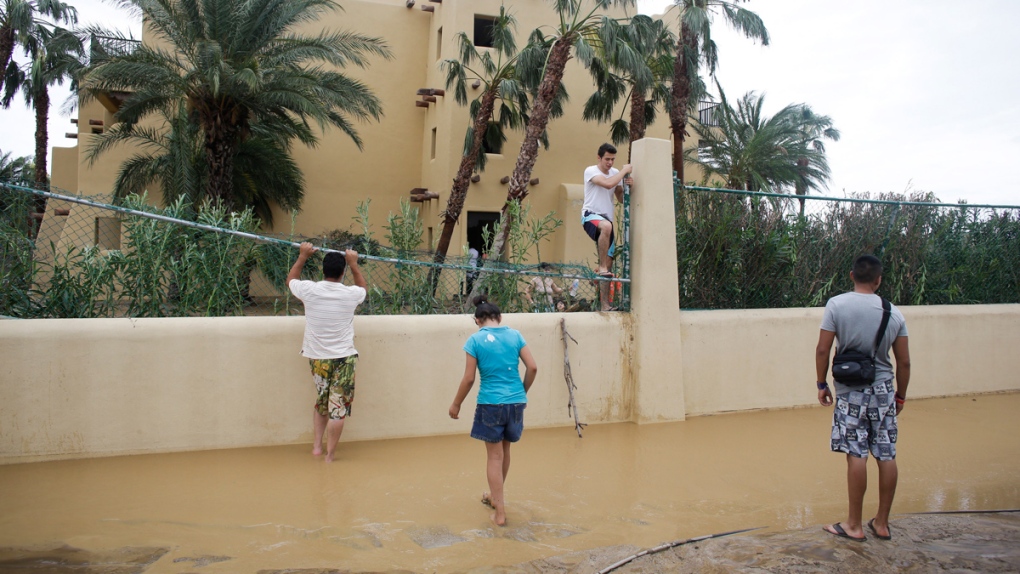 Tourist Cesar Calzada, centre, of Mexico City, climbs over a fence of the Riu resort to get out of the hotel and go search for food after Hurricane Odile severely damaged the hotel in Los Cabos, Mexico, Monday, Sept. 15, 2014. (AP / Victor R. Caivano)

CABO SAN LUCAS, Mexico -- The Mexican government began airlifting the first of thousands of stranded tourists out of the hurricane-ravaged resort area of Los Cabos on Tuesday, as residents picked up the pieces of shattered, flooded homes.

The Interior Ministry said military and commercial planes were carrying travellers out through the Los Cabos international airport, which remained closed to commercial flights due to damage suffered when Hurricane Odile tore through the area late Sunday and Monday.

Images on Mexican television showed the terminal full of debris, but Ministry official Jose Maria Tapia told Milenio Television earlier that the runway was usable and work was nearly complete to make the control tower operable.

Travellers were being flown free of charge to airports in Tijuana, Mazatlan, Guadalajara and Mexico City to catch connecting flights and, in the case of foreigners, receive consular assistance.

Thousands in the state of Baja California Sur remained without electricity, water or phone service. A boat was on its way with humanitarian aid, and authorities were working to restore utilities.

President Enrique Pena Nieto was scheduled to tour the area later, after presiding over an independence day military parade in the capital.

Downgraded to a tropical storm, Odile continued to soak parts of the Baja California Peninsula, and forecasters said it was still capable of unleashing dangerous flash floods and mudslides.

In Los Cabos, Enrique Cota wept as he stood in murky, ankle-deep water and surveyed the destruction at his home. On the kitchen wall, a muddy mark nearly waist-high showed how deep the floodwaters got.

"We'll have to start over, little by little," Cota said, "because the stove, the refrigerator, the television, the kid's computer -- it's all ruined."

He rode out Odile's landfall in a shelter with firefighters, and said he hadn't slept for two days.

Authorities said about 30,000 tourists, 26,000 of them foreigners, were being put up in temporary refuges or hotel areas converted to shelters.

Luis Felipe Puente, national co-ordinator for Civil Protection, said the airlift would prioritize the elderly and people with health problems.

For some, it was a dream vacation turned nightmare.

Charly Park, 52, flew in from Los Angeles with his wife on Sunday, but they never even got to check into their room. Instead, they were put directly into the hotel shelter where they spent a hot, cramped night as the hurricane raged outside.

"It's a horrible experience, no air conditioning, no fans ... the power lines all fell down," Park said.

He was considering renting a car to drive to Tijuana, a little over 1,600 kilometres to the north, and cross the border back into California.

Emergency officials in Baja California reported that 135 people were treated for minor injuries from flying glass or falling objects.

But surprisingly for a hurricane of this intensity -- it made landfall as a monster Category 3 storm -- there were no reports so far of fatalities directly related to Odile.

The U.S. National Hurricane Center said that by late Tuesday afternoon Tropical Storm Odile had maximum sustained winds near 85 kph. It was centred about 245 kilometres south-southeast of Puerto Penasco, and was moving to the north near 11 kph.

Farther south in the Pacific, Tropical Storm Polo formed off southern Mexico early Tuesday. It was centred 415 kilometres south of Acapulco with maximum sustained winds of 75 kph, and was moving northwest parallel to the coast at 19 kph. The hurricane centre predicted that Polo could become a hurricane later in the week.

Meanwhile in the central Atlantic, Hurricane Edouard was a Category 2 storm with maximum sustained winds near 165 kph. It was forecast to pose no threat to land.