Hunting for bats: How these animals could help find a way out of the pandemic

DORCHESTER, ONT. --  For me, one of the best things about chasing bats has been that they’ve consistently taken me to places I’d never otherwise see.

In late June, that treasure is the sprawling back patio of a lovely bungalow near London, Ont. There’s a ravine just beyond, and as the setting sun casts shadows on the trees, and Cedar Waxwings bound noisily through the air, we set up nets and cameras in anticipation of the headlining act.

We’re here following biologist Paul Faure. The owners of this house have told Faure that they’ve seen bats coming out of the attic, from a hole next to the chimney.

Our plan is to catch these bats, so that Faure can determine what species they are. He keeps a colony of big brown bats in his lab at McMaster University in Hamilton, Ont. If the bats in this house are big browns too, this house might be a good place to get more individuals for his COVID-19 research.

It turns out some bats can live with coronaviruses in their bodies without getting sick at all. Understanding why bats fare so differently when faced with viral invaders than humans could be a game changer in the fight against the pandemic that has already claimed more than a million lives worldwide.

Faure has teamed up with virologists at McMaster to experimentally determine how such a tiny animal could be so powerful against a virus that kills humans so easily.

Like Faure, I’m also a bat biologist, and like Faure, I’ve travelled the world learning about bats. In fact, I even once caught vampire bats with Faure in Belize. I’ve found bats in the leaves of palm trees in Madagascar, within hollow trees in Costa Rica, over rivers in the Amazon basin, and under road culverts in Panama. It never gets old.

There are more than 1,400 species of bats in the world, and getting up close and personal with them – seeing them in their habitats, photographing them, and learning about their elusive behaviours – is a passion that’s driven me for more than 20 years.

In 2011, that journey took me to Touming Cave, near the top of Mount Liantai in the Chinese province of Shandong. I was there to see horseshoe bats. The SARS virus, which I knew had originally come from Chinese Horseshoe bats, was a distant memory by that point, so I wasn’t really thinking about coronaviruses at all. In fact, I wasn’t even wearing a face mask.

Knowing what I know now, that was pretty foolish. 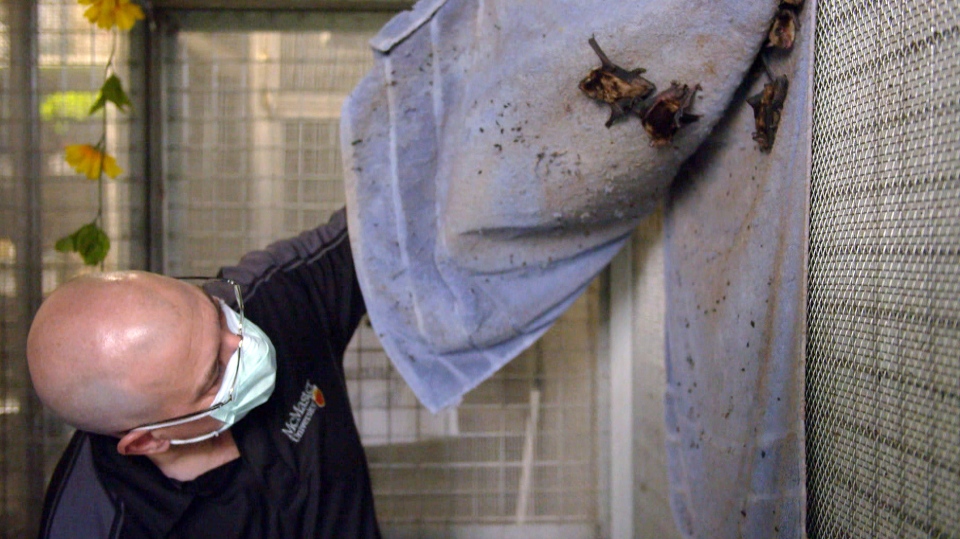 This time around, Faure and I are both wearing masks, as are the members of my W5 crew. We don’t wear masks because we fear diseases from these Canadian bats, but because we have to worry that one of us might already have COVID-19.

As the sun finally sets, Faure’s ultrasonic bat detector – a device that listens in on the echolocation calls of bats – starts to chirp, and there’s movement from the chimney.

Faure and I run over to lift our net into position. With any luck, we’ll have a bat in hand very soon. Our W5 cameraman lifts the camera onto his shoulder and holds his position. In silence, we wait.

After a short time, a bat hits the net and Faure rushes forward to capture it before it gets away.