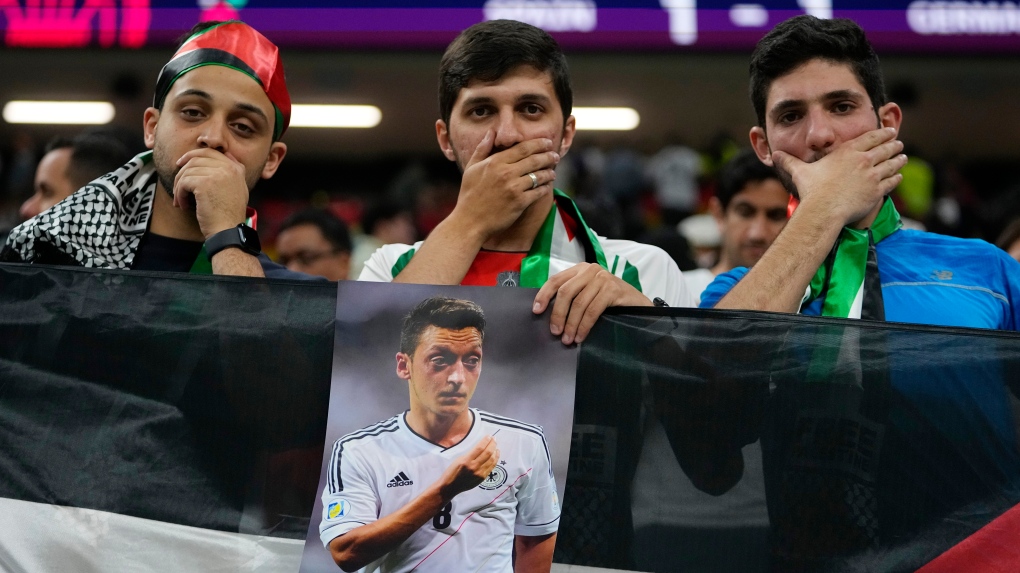 Qatari soccer fans hit back at Germany's World Cup protest on Sunday by holding pictures of former Germany player Mesut Ozil while covering their mouths during the match against Spain.

A group of fans held copies of a hand-drawn sketch of Ozil, while others showed pictures of him in action for Germany.

The clearly coordinated display was apparently in response to Germany players' gesture on Wednesday, when they covered their mouths to protest against FIFA following the governing body's clampdown on the "One Love" armband. That gesture was a response to FIFA's effective nixing of seven European teams' plans to wear armbands that were seen as a rebuke to host nation Qatar and its human rights record.

Qatari fans appeared Sunday to reference Germany's own questionable treatment of Ozil, the former player who quit the national team after becoming a target of racist abuse and a scapegoat for Germany's early World Cup exit in 2018.

Ozil, a German-born descendant of Turkish immigrants, accused the country's soccer federation, fans and media of racism in their treatment of people with Turkish roots.

"I am German when we win, but I am an immigrant when we lose," Ozil said at the time.

The abuse started before the 2018 World Cup when Ozil and Germany teammate Ilkay Gundogan posed for photographs with Turkish President Recep Tayyip Erdogan. Gundogan also has a Turkish family background. He was subsequently jeered by German supporters during a World Cup warmup game.

The abuse of Ozil, in particular, increased after the tournament, helped by incendiary statements from Germany team manager Oliver Bierhoff and the federation president at the time, Reinhard Grindel.

Grindel later said he should have given Ozil more support.

After playing in Sunday's game at Al Bayt Stadium, which Germany and Spain drew 1-1, Gundogan said he just wanted to focus on soccer from now on.

"Honestly, my point of view is: now the politics are finished," Gundogan said. "The country of Qatar is very proud to host the World Cup, also the first Muslim country, and I come from a Muslim family. So the Muslim community is proud. So I think now it's just about football."