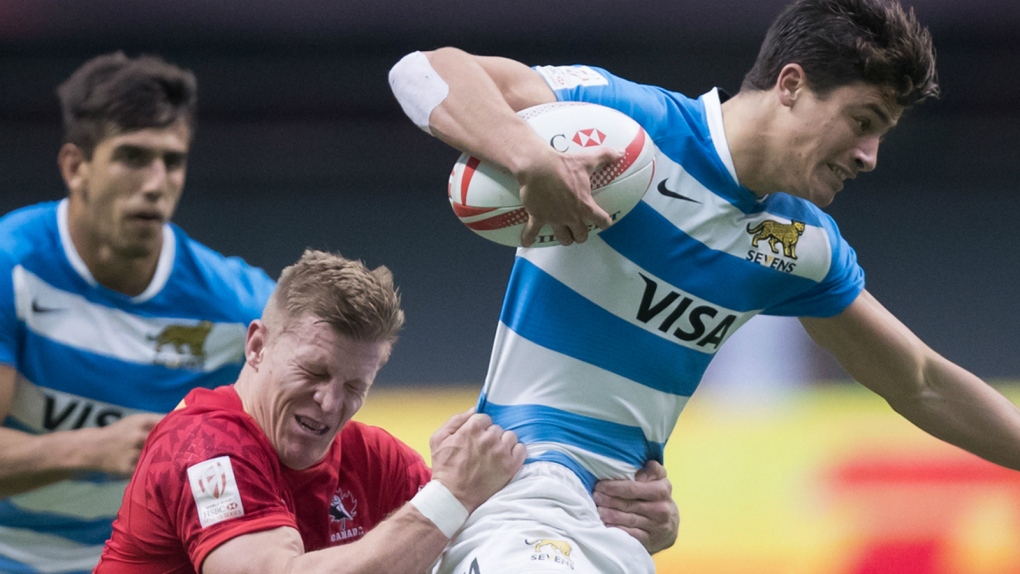 A hiccup in the first match pushed them into the consolation round, but the squad rebounded to win five straight as part of a performance that buoyed both players and fans about the program's future.

Fast-forward to 2017 and a seventh-place showing at the Canada Sevens left the host country bitterly disappointed.

Argentina beat a worn-down Canada 12-5 on Sunday at B.C. Place Stadium to send the home side packing from an event where it showed flashes of brilliance before getting cut down by a crippling lack of depth.

"When we were fit and healthy on Day 1, I hope we gave a glimpse of what this group is capable of," said Canadian head coach Damian McGrath. "I hope (the fans) take that with them rather than the battered and bloodied and bruised group that limped off at the end.

"We appreciated every minute of support they gave us, and I hope they appreciated what we did."

Canada, which ranked 12th in the HSBC World Rugby Sevens Series entering the weekend, downed No. 7 Scotland and No. 14 Russia in convincing fashion before giving No. 4 New Zealand all it could handle in a 15-14 loss on Saturday.

But the Canadians had just nine healthy players for the match against the All Blacks Sevens and then lost Adam Zaruba, who had five combined tries, to a concussion prior to Sunday's 36-7 loss to top-ranked South Africa in the Cup quarter-final.

Justin Douglas (leg) and John Moonlight (knee) started against both South Africa and Argentina, but were nowhere near 100 per cent fit.

McGrath has said repeatedly the top end of his roster can compete with any country in the world. It's when someone goes down that things get dicey.

South Africa took on No. 3 England later Sunday in the Cup final.

Despite finishing with a losing record on home soil, Canadian captain Harry Jones said the program is miles ahead of where it was.

"There's a lot of disappointed guys," said the West Vancouver, B.C. native. "We were 5-1 last year, but we're a much better team this year. We showed that going toe-to-toe with New Zealand.

"Damian's done a lot of work with us. Simple stuff, but the team's really gelling. The off-field stuff is paying dividends as well because everyone's happy."

Up 5-0 at halftime against Argentina on a Douglas try, Canada was unable to get another breakthrough in front of a roaring crowd at B.C. Place Stadium.

Franco Sabato kicked the ball ahead to himself three minutes into the second half and touched down for a tied score after Javier Rojas failed on the conversion.

Canada had a chance to get back on top, but the ball slipped out of Isaac Kaay's hands as he looked primed to make a move towards the try line.

The Canadians seemed to run out of gas from there, and Nicholas Menendez put things out of reach with an Argentine try that Rojas converted for a 12-5 lead.

Canada felt hard done by on the sequence because neither the players or the referee on the pitch realized that Pat Kay was down injured in the lead up to the clinching points.

"The boys put in a gutsy effort," said Jones. "Just unlucky we didn't come away with it."

Canada opened the 10-stop series with consecutive 13th-place finishes before grabbing a fourth, a 13th and then a seventh last weekend in Las Vegas. The next tournament is set for Singapore in early April followed by Paris and London.

It has been a difficult 12 months for the Canadian men, who failed to build on the momentum of last year's tournament and missed out on the Rio Olympics. The program then saw its funding from the government-backed Own the Podium program slashed to zero.

"They're so disappointed," said McGrath. "But as I told them, last year and before Christmas we couldn't buy a quarter-final finish. Now suddenly we're in the quarter-finals and we're desperately disappointed we aren't going further.

After attracting some 60,000 spectators to the inaugural two-day Canada Sevens in 2016, organizers expected a combined crowd of 76,000 through the turnstiles this weekend - 38,058 showed up on Saturday - to watch rugby's fast-paced, seven-on-seven incarnation that sees games come in quick succession.

These tournament are renowned for their festive atmospheres coupled with co-ordinated costumes, and the supporters at B.C. Place kept up the trend.

"It's disappointing we couldn't put on a bit more of a show for the fans, but for rugby in Canada, this is unbelievable," said Jones. "To pack a house two days playing rugby ... rugby. Not Vancouver Canucks, not B.C. Lions not Whitecaps - this is Canadian rugby and there's a lot of red out there.

"This is for the kids out there as well because we need the grassroots to start growing. In five, 10 years those are the kids that are going to be playing."