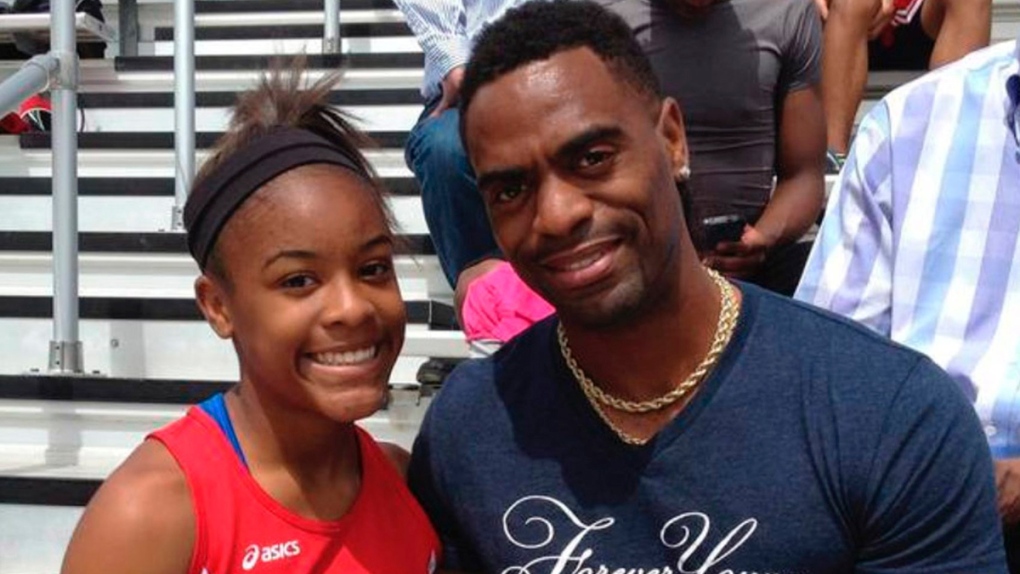 Trinity Gay with her father Tyson Gay in Georgetown, Ky., on May 3, 2014. (Mark Maloney / Lexington Herald-Leader via AP)

The three appeared via video before Fayette County, Kentucky, District Court Judge T. Bruce Bell, who will assign attorneys for them.

Bell set bail at $5,000 each for Chazerae Taylor, 38, and his son, D'Markeo Taylor, 19, on wanton endangerment charges. Dvonta Middlebrooks, 21, is charged with wanton endangerment and possession of a firearm by a convicted felon. His bail was set at $12,500.

Lexington police say Middlebrooks was in the parking lot of the Cook Out restaurant and fired multiple shots in the incident in which Trinity Gay was killed early Sunday. Court records show the Taylors admitted also firing shots.

Tyson Gay said he and his daughter were very close, according to Lexington TV station WLEX, which spoke to him Sunday.

"It's so crazy. I have no idea what happened," Gay told the station.

Grief counsellors were at Lexington's Lafayette High School on Monday for students and staff, Fayette County Public Schools spokeswoman Lisa Deffendall said. Both Gay and his daughter attended the school.

"She was full of energy and life," said Mullins, who had Gay in family and consumer science classes along with the Future Educators of America club. "She was a kid that everybody wanted to teach."

Near the end of a Monday morning news conference, grief counsellors brought in a large purple banner bearing a hashtag that read ".LLT" for Long Live Trinity and adorned with expressions from students and staff. A therapy dog named Hannah Joy was also brought in.

Jacobs said Trinity Gay's mother, Shoshana Boyd, who also attended Lafayette, had thanked him for support from the school and community, and noted that Trinity's life was something to celebrate.

"Our hearts are burdened that she is not in our building anymore," Jacobs said.

A candlelight vigil is planned at 8 p.m. Monday on the school's track, where Trinity Gay excelled.

Trinity Gay was a standout sprinter, placing in the top five in several events at the state championships in May. Her father still holds the state record in the 100 set in 2001.

"Coming from a coach's perspective, a lot of athletes didn't want to race her," Washington said, "Especially the ones that might not have been as good as her. Then there were some that were like, 'I'm going to beat her today.' ... She knew, OK, I want to beat this person today and want to get out of the blocks fast so I can win this race."

Washington added that she saw a lot of Tyson Gay in his daughter, and in her competitive drive. She took losses hard but didn't boast or talk trash when victorious.

Tyson Gay competed in the last three Summer Olympics. He was part of a team that won a silver medal in the 4x100-meter relay at the 2012 London Games, though that medal was ultimately stripped after Gay tested positive for steroids in 2013.

Last summer's Games in Rio featured another stinging disappointment for Gay, 33, who has battled injuries. He was a member of the American men's 4x100-meter relay team that finished third in the final before being disqualified for an illegal baton exchange between Mike Rodgers and Justin Gatlin. The team's appeal was denied, giving Canada the bronze medal.

The sports world has been mourning the news of the death on social media.

USA Track and Field tweeted, "Sending our thoughts & prayers to ΓåòTysonLGay & his loved ones as they mourn the tragic & senseless loss of his daughter, Trinity." Several of Gay's USA track teammates echoed the comment, including Natasha Hastings and Arman Hall.