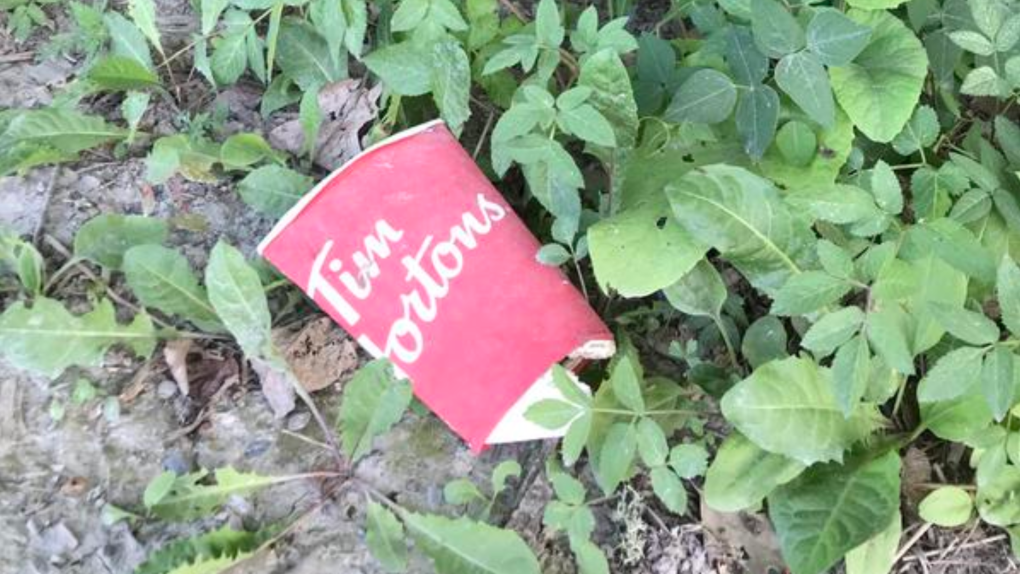 TORONTO -- Bottles, food wrappers, straws and lids from Nestlé and Tim Hortons were some of the most common pieces of branded garbage found in a Canada-wide trash audit by Greenpeace for the second year running.

Starbucks, McDonald’s and Coca-Cola round out the top five polluting corporations list released Wednesday by the environmental group, which surveyed nine shorelines across the country.

“Canada’s top plastic polluters are once again the usual suspects,” said Sarah King, head of Greenpeace Canada’s oceans and plastics campaign, in a news release. The group says the results show that the corporations are shifting responsibility on consumers rather than addressing their own “broken business models” to move away from single-use plastic.

Home and grocery brands Sobeys, Costco, Walmart and Loblaw were found among the trash of 240 companies, but 39 per cent of branded plastic pollution belonged to the top five: Nestlé, Tim Hortons, Starbucks, McDonald’s and Coca-Cola. Tim Hortons ranked first in six of the nine locations.

In an emailed response to the report, a spokesperson for Tim Hortons said in an email that the company had requested a meeting with Greenpeace “through several emails and phone calls” and awaits a response. “At Tim Hortons, we believe that we have a responsibility to contribute to a clean environment,” the email said. The company, which offers a discount for customers who use reusable mugs or cups, recently announced a “sustainability commitment” that includes a new 100 per cent recyclable lid and a reusable cup for purchase.

Nestlé Canada said in an email that it is “accelerating” moves to ensure all its packaging is recyclable or reusable by 2025. The company owns brands like Nestlé Pure Life water, Kit Kat, Nestea and Coffee Crisp. “We are working hard to ensure that none of our product packaging, including plastics, ends up in landfill or as litter, including in our oceans, lakes and waterways,” said Catherine O’Brien, senior VP of Corporate Affairs.

“We continue to work with our partners and industry associations to explore different packaging solutions to reduce plastic usage and our newly launched Nestlé Institute of Packaging Sciences is developing new approaches to eliminating plastic waste.”

While cigarette butts and bottles were the most found items in the Greenpeace survey, cups, lids, straws and stirrers were among the top five plastic litter items. Coffee chain Starbucks, the third highest polluter on the list, introduced a recyclable strawless lid earlier this year and plans to eliminate plastic straws by 2020. In an emailed statement, the coffee chain said it is making “investments and commitments” toward becoming “the world’s largest green retail business.” “Starbucks continues to be dedicated to the research and development of leading programs to eliminate waste and increase recycling,” the company said.

McDonald’s Canada, the fourth highest polluter, according to Greenpeace, announced a commitment last year to source 100 per cent of packaging from “renewable, recycles, or certified sources” by 2025. “Around the world, and here in Canada, McDonald’s is committed to continually improving the sustainability of our packaging,” the company said in an emailed statement Thursday. “We understand that recycling infrastructure, regulations and consumer behaviours vary from city to city, and country to country, but we plan to be part of the solution and help influence powerful change.”

The fifth-highest polluter, Coca-Cola, said in a statement that by 2030 they plan to collect a can or bottle for every one sold. “But we can’t do this alone and are actively working with our partners, stakeholders and customers to educate consumers to recycle their drink packaging properly,” it said. “We recognize that plastic pollution is a problem and that our beverage containers shouldn’t end up in a landfill, or as litter in waterways or in nature.”

Many corporations and governments have expressed a commitment to move away from single-use plastics in recent years. Sobeys, Holiday Inn, Uniqlo and the San Francisco airport were among a slew of entities to announce new plastics policies, including bans on mini shampoo bottles and plastic bags. In June, the Liberal government announced it would use a “science-based approach” to determine which plastics to ban as of 2021.

Greenpeace said too many companies invest in what the group dubs “false solutions,” leaving much work to be done.

“Companies’ responsibility doesn’t end at the point of sale,” said King in the statement. “It’s time these polluters got honest with their customers about the scale of their plastics problem and made a real commitment to solve it through ditching disposables and embracing reuse.”

.@Nestle, @TimHortons, @McDonalds and @CocaCola are in the Top 5 Plastic Polluters list for the second year in a row, while @Starbucks steals the 3rd place.
It's time they join the #reuserevolution and #BreakFreeFromPlastichttps://t.co/Czupe0d3Vz