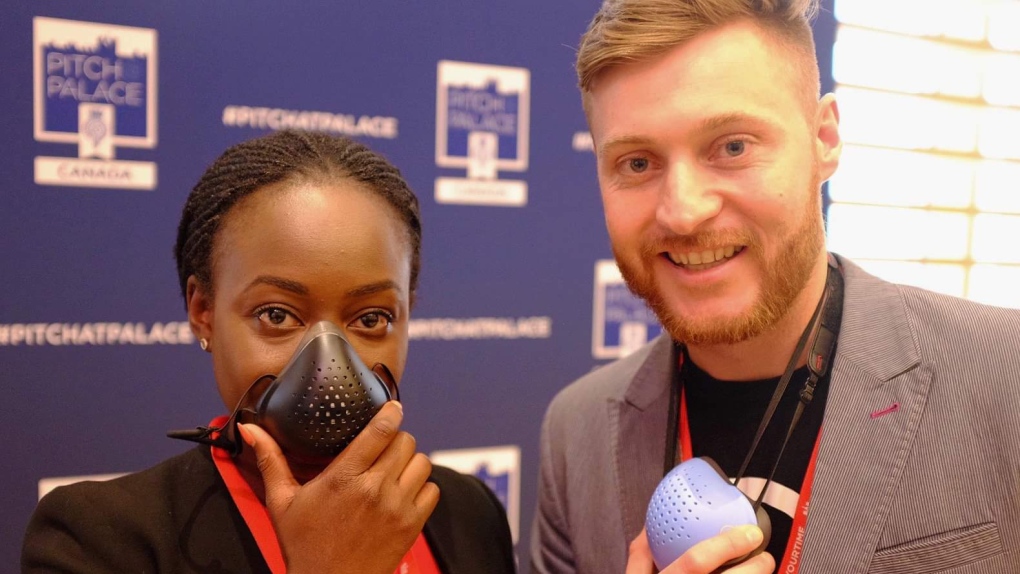 O2 Canada, which creates air pollution respirators, was one of two winners of the Pitch@Palace event held in Toronto. (Jeremiah Rodriguez / CTVNews.ca)

Two Canadian entrepreneurs beat out nearly two dozen of their peers to win a trip to the U.K. courtesy Prince Andrew.

On Tuesday, 24 entrepreneurs from across the country competed at a Pitch@Palace event at the Art Gallery of Ontario in Toronto. The winner was voted on by the attendees, a group that included a wide assortment of business leaders.

The three third-place runner ups were:

Some of the other innovations included a watch that detects when a user suffers a heart attack and automatically contacts emergency medical services, while another was a micro-sensor that finds gastrointestinal leaks that can arise after surgery in real-time.

Then there was the product shown off by Ava Technologies. Company CEO and co-founder Valerie Song described Ava’s smart indoor electric garden as “an espresso machine for gardening.”

“You just pick the plant pot of your choice, plug the device in, add water, plant the pot and that’s pretty much it, “ she told CTVNews.ca. “it does all of the watering and lighting for you.”

Many entrepreneurs noted how nervous some of them felt pitching their concepts.

On Monday, the entrepreneurs gave their first round of elevator pitches for judges, including the Duke of York.

The strongest pitches that day were given three minutes to make their case in front of another illustrious panel on Tuesday.

Prince Andrew spurred on the more connected in the crowd to hear out the pitches and figure out how they can help.

“The connections that you can make for these businesses are going to be the thing they are going to remember about this evening,” he said.

Prince Andrew launched the Pitch@Palace events in 2014 to “amplify and accelerate the work of entrepreneurs,” according to the event’s website.

The international pitch program is designed for “entrepreneurs with global ambitions.” Since its founding, it has hosted 55 events around the world featuring 1,373 pitches.

BMO's head of Canadian business banking Dev Srinivasan was proud of the number of female entrepreneurs on stage and said "entrepreneurship and small businesses in Canada are the lifeblood of the economy."

He was impressed with the broad range of companies there.

The inaugural Canadian Pitch@Palace is supported by BMO Financial Group and the Rideau Hall Foundation, a charity which works closely with the Governor General’s office and Bank of Montreal, which provided $500,000 in funding.

With files from Cillian O'Brien