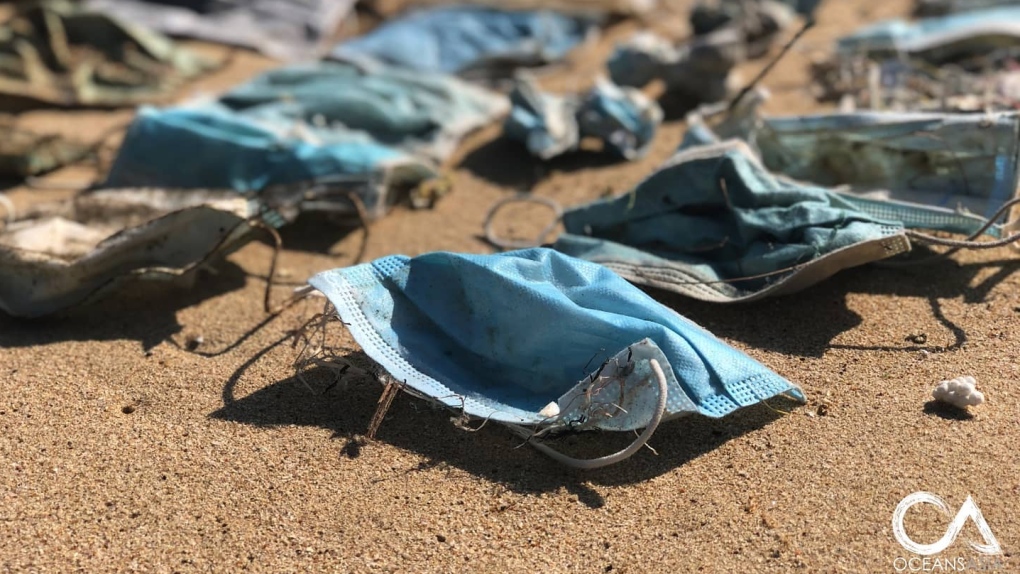 Some of the face masks collected at the Soko Islands by OceansAsia on November 27, 2020. (Naomi Brannan / OceansAsia)

TORONTO -- More than 1.56 billion face masks used in 2020 will make their way into our planet’s oceans, joining literal tonnes of other plastic pollution, according to an estimate by OceansAsia.

The Hong-Kong based marine conservation organization released a report on Monday that details one of the devastating side-effects of the COVID-19 pandemic: the increase in plastic use and disposal.

They hypothesized that the face masks would add up to around 4,860 to 6,240 tons of extra plastic waste in the oceans.

“The 1.56 billion face masks that will likely enter our oceans in 2020 are just the tip of the iceberg,” Dr. Teale Phelps Bondaroff, Director of Research for OceansAsia, and lead author of the report said in a press release. “[It’s] just a small fraction of the estimated 8 to 12 million metric tonnes of plastic that enter our oceans each year.”

The researchers acknowledge that it’s difficult to pinpoint the exact number of masks that have been manufactured worldwide, and also to figure out what percentage would have been inappropriately disposed of.

Previous research has suggested that three per cent of plastic waste finds its way into our oceans. Using a global production estimate of 52 billion masks manufactured in 2020 -- a number that comes from a June report forecasting production numbers -- and a conservative three-per-cent loss rate, OceansAsia arrived at the 1.56 billion estimate for how many masks will end up in the Earth’s oceans.

The research started when OceansAsia visited an isolated beach in the Soko Islands in late February 2020. As the beach was boat-access only, anything found on the shore would’ve been washed up from the ocean, not left there by visitors.

They expected to see a couple masks washed up with other plastic pollution. What they weren’t expecting was to come across 70 masks strewn across a 100 metre stretch of the beach.

At that time, it was six weeks after mask-wearing had become the norm in Hong Kong due to COVID-19.

The team continued visiting the beach, and would post photos of the face masks they found on Facebook, lining up the bedraggled blue rectangles on the sand. And the mask numbers persisted throughout the months.

In late November, two volunteers “collected 54 masks over the course of one hour from our original test beach,” the report stated. 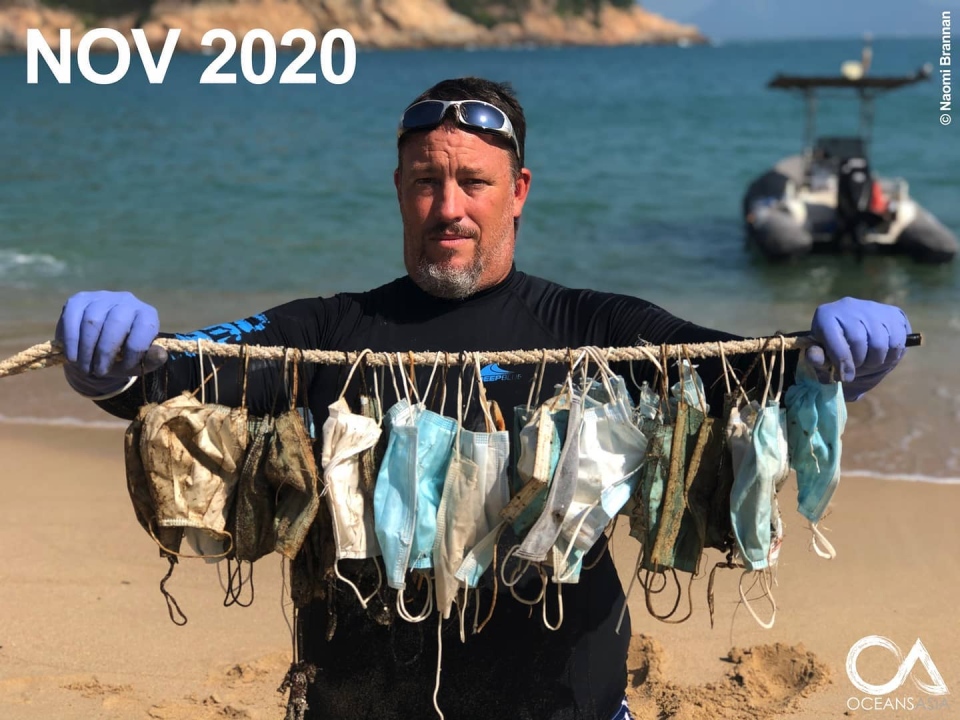 When the pandemic hit Canada in March, it disrupted the country’s attempts to shift away from plastic -- suddenly, and understandably, the larger concern was with cleanliness and contamination. Being able to dispose of bags, gloves or other plastic barriers between us and a world that seemed full of infection was a new priority. Coffee shops stopped filling up reusable mugs.

“Hygiene concerns and greater reliance on take-away food has led to increased use of plastics, particularly plastic packaging,” Gary Stokes, Director of Operations of OceansAsia, said in the release. “Meanwhile, a number of measures designed to reduce plastic consumption, like single-use plastic bag bans, have been delayed, paused, or rolled back.”

The sudden need for more packaging was felt across numerous countries struck by the virus. In Italy, the purchasing of packaged mandarin oranges went up by 111 per cent in the first week of March 2020, compared to the previous year, the report stated.

As restaurants were forced to limit or shut down in-person service, takeaway containers started to pile up. The report cited an environmental group from Hong Kong, Greeners Action, which had estimated that those in Hong Kong were disposing of 101 million pieces of plastic cutlery and single-use food containers per week in April.

To get general information about the effects of plastic pollution, the researchers looked at peer-reviewed research on the topic, focusing on those from the past five years.

In 2018, the global plastic production that year totalled around 359 million tonnes, according to the report. And less is getting recycled than many consumers might think. In Canada, a report commissioned by Environment and Climate Change Canada in 2018 found that only nine per cent of plastic waste is recycled, while around 86 per cent end up in landfills.

Our oceans were already full of plastic long before COVID-19 drove up production of things such as face masks and PPE.

Plastic waste can have a horrific effect on marine animals and the environment as a whole.

“Marine plastic pollution is devastating our oceans,” Stokes said. “Plastic pollution kills an estimated 100,000 marine mammals and turtles, over a million seabirds, and even greater numbers of fish, invertebrates and other animals each year. It also negatively impacts fisheries and the tourism industry, and costs the global economy an estimated $13 billion USD per year.”

Although governments and health officials have championed the use of cloth face masks for the general public, which can be washed and reused, many still use disposable surgical masks.

These blue, paper-like masks are actually made largely of plastics, with the most common material being polypropylene.

“Products of similar materials to face masks are estimated to take as long as 450 years to decompose,” the report stated, adding that the masks could release microplastics as they decompose. The straps on the masks also present an entanglement threat to animals if they end up in the environment after being disposed of, leading one animal rights group to call for mask wearers to cut the straps before they throw away the masks.

The fears of contamination, as well as the competing types of plastic contained in the masks, make them hard to recycle, which could contribute to why they are ending up in plastic waste that enters the environment, the report suggested.

Face masks are a part of everyday life now in many parts of Canada, and are a lifesaving measure to prevent the spread of COVID-19. Eliminating masks completely is not an option -- but researchers stressed that for the general public, choosing reusable masks for day-to-day use over disposable ones will cut down on plastic waste ending up in the oceans.

Where single-use masks are necessary, researchers urge consumers to discard their masks correctly, and check with local authorities for guidance on how to do so. Some companies are also working on producing masks made with sustainable or biodegradable materials, in order to cut down on pollution.

Pandemic shutdowns the last straw for some Canadian retailers, push others to brink

What provinces and territories have said about COVID-19 vaccine plans

This is what the U.K.'s COVID-19 vaccination cards will look like