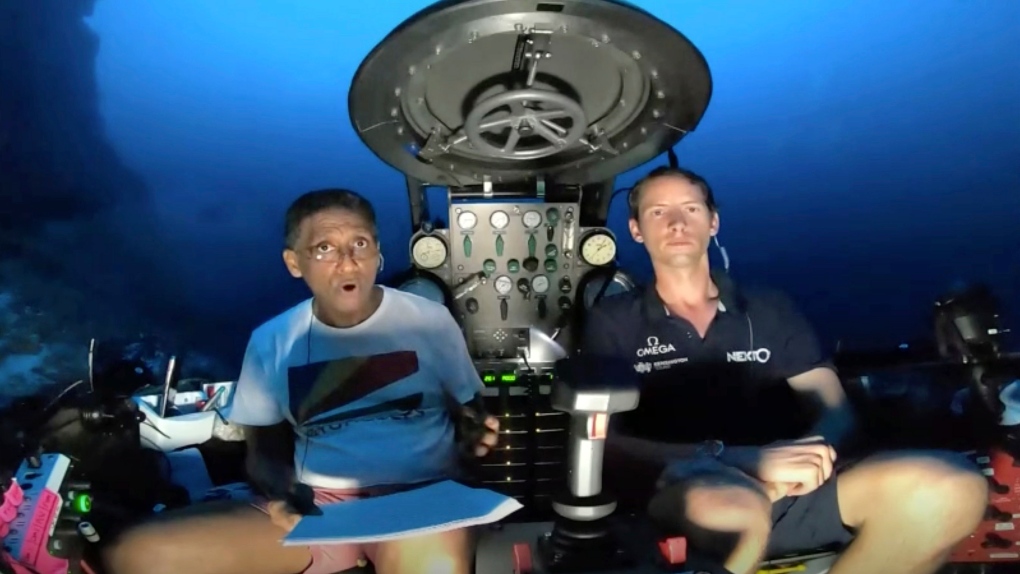 An image taken from video issued by Nekton shows Seychelles President Danny Faure, left, speaking from inside a submersible from the vessel Ocean Zephyr, under the water off the coast of Desroches, in the outer islands of Seychelles Sunday April 14, 2019. (Nekton via AP)

VICTORIA, Seychelles -- The British-led Nekton scientific mission on Thursday completed a seven-week expedition in the Indian Ocean aimed at documenting changes beneath the waves that could affect billions of people in the surrounding region over the coming decades.

Little is known about the watery world below depths of 30 metres, the limit to which a normal scuba diver can go. Operating down to 450 metres with manned submersibles and underwater drones off the island nation of the Seychelles, the scientists were the first to explore areas of great diversity where sunlight weakens and the deep ocean begins.

The oceans' role in regulating climate and the threats they face from global warming are underestimated by many. Scientific missions are crucial in taking stock of underwater ecosystems' health.

"The rariphotic zone has been shown in a number of papers in the Atlantic and Caribbean but has never previously been shown in the Indian Ocean," Woodall said, adding that months of analysis will be needed to confirm the discovery.

In this twilight zone that sunlight barely reaches, photosynthesis is no longer possible and species that cannot move toward the ocean's surface rely on particles falling from above for sustenance.

Woodall also said she was excited to see "vibrant" communities of fish during the mission.

"We're seeing schools of small fish -- that middle of the food chain -- but we're also seeing a large number of big predators -- the sharks and all the other fish predators as well that are there. So this shows that protection works," she said.

With the expedition over, the long work of analysis begins. Researchers conducted over 300 deployments, collected around 1,300 samples and 20 terabytes of data and surveyed about 30 square kilometres (11.5 sq. miles) of seabed using high-resolution multi-beam sonar equipment.

Woodall estimated her team will need up to 18 months of lab work to process and make sense of the data gathered during the expedition.

The data will be used to help the Seychelles expand its policy of protecting almost a third of its national waters by 2020. The initiative is important for the country's "blue economy," an attempt to balance development needs with those of the environment.

On Sunday, President Danny Faure visited the Nekton team and delivered a striking speech broadcast live from deep below the ocean's surface, making a global plea for stronger protection of the "beating blue heart of our planet."

For Nekton mission director Oliver Steeds, Faure's visit was a win for the ocean.

"I hope our ability to broadcast live from the ocean has helped put the oceans back on the map in the boardrooms, the corridors of power and in the classrooms," Steeds said. "That's where the decisions need to be made to fundamentally secure our future and the improved management and conservation of our ocean."

He said mission members hope that nations across the Indian Ocean will have the political will to improve the management and conservation of their waters.

"It's been an extraordinary aquatic adventure," Steeds said. "We're delighted that so many people around the world have been following our progress but it only really matters if the Seychelles can continue to take a lead on the world stage as a beacon of hope for ocean conservation."

This is the first of a half-dozen regions the mission plans to explore before the end of 2022, when scientists will present their research at a summit on the state of the Indian Ocean.