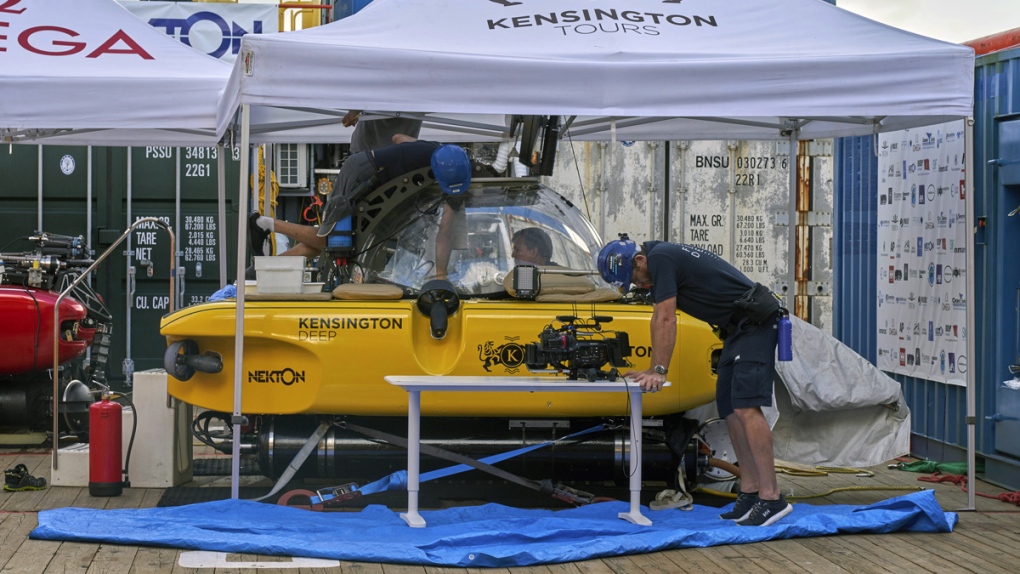 Crew inspect a submersible after a British scientist and her American pilot had to make an emergency ascent from 250 metres beneath the surface of the Indian ocean off the Seychelles on March 19, 2019. (David Keyton / AP)

ALDABRA, Seychelles -- A drama in which a submersible made an emergency ascent from 250 metres (820 feet) below the Indian Ocean was caused by condensation burning out a small motor in the cockpit, the director of the British-led Nekton Mission said on Wednesday.

Oliver Steeds told The Associated Press that the burnout produced an acrid smell of smoke which triggered the pilot's emergency response.

"That's all now been fixed so we're confident now to undertake a dive," Steeds said.

The American pilot, Robert Carmichael, and the passenger, British scientist Molly Rivers, donned breathing apparatus as the vessel neared the surface. Neither was hurt in Tuesday's incident during a dive off the Seychelles.

The two-person sub returned to the water on Wednesday for tests. With Carmichael and Steeds on board, it dived to 80 metres for roughly two hours and returned to the surface without incident.

The submersible is a key part of the Nekton Mission, an unprecedented, years-long scientific exploration of the Indian Ocean to document changes taking place beneath the waves that could affect billions of people in the surrounding region over the coming decades.

The mission's ship is gathering data in the Seychelles to help inform the government's plan to protect almost a third of its vast waters by 2020. Almost nothing is known about the marine life there below 30 metres, or scuba depth.

The Associated Press is the only news agency working with British scientists from the research team. AP video coverage will include exploring the depths of up to 300 metres (985 feet) off the coast of the Seychelles, the search for submerged mountain ranges and previously undiscovered marine life, a behind-the-scenes look at life on board, interviews with researchers and aerial footage of the mission.

The seven-week expedition is expected to run until April 19.