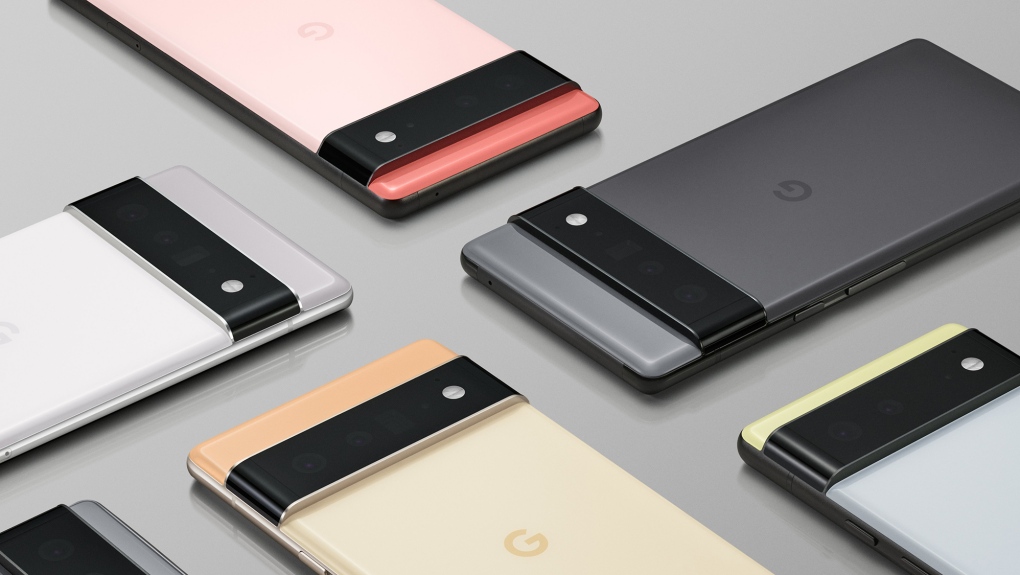 Google showed off the new 6.4-inch Pixel 6 and 6.7-inch Pixel 6 Pro, which run on Android 12 in a virtual press conference Tuesday. (Google via CNN)

At a virtual press conference on Tuesday, the company showed off the new 6.4-inch Pixel 6 and 6.7-inch Pixel 6 Pro, which run on Android 12, Google's most significant software update in years. The devices feature nearly bezel-less displays, a new camera system packed into the horizontal camera bar that runs along the backside, innovative photo features and a battery that can last nearly two days by prioritizing what apps are used most (and shutting down the rest).

But the real game changer is Google's new in-house Tensor processor, which marks a move away from the third-party chips that are commonly used in rival Android devices. The company said Tensor makes the Pixel 6 phones run 80% faster than the Pixel 5, allowing on-device artificial intelligence for features such as more accurate speech recognition and image processing. It also gives the phones more processing power for games and apps, and makes some of its new camera tools possible.

Apple, Huawei and Samsung have been making their own chips for years, but Google's effort to double down on a tailor-made processor for its own Google Android software shows it's ready to create a custom experience for its users and try to gain a much bigger slice of the global smartphone market. (Right now, Google Pixel represents less than 1% of global smartphone sales, selling about 3.7 million units last year, according to market research firm IDC.)

"Google never intended the Pixel to be a high volume smartphone," said David McQueen, research director at ABI Research. "The idea was that they would use the Pixel devices to showcase the Android ecosystem, demonstrating to their partners what could be done with top-end hardware and the latest Android software." But the advantages of a custom Google Tensor chip could allow it to make new experiences possible, he added.

The Pixel 6 comes in three colors -- Seafoam, Kinda Coral and black -- and starts at $599. Meanwhile, the Pixel 6 Pro is available in sunny, white and black, starting at $899. The new Pixel 6 phones are now available for pre-order and start shipping October 28.

The launch comes during a busy week for tech product launches ahead of the holiday season. On Monday, Apple unveiled new MacBook Pro laptops and its next-generation AirPods. And Samsung is hosting a mysterious press event on Wednesday. But these products are also launching amid ongoing concerns about global component shortages and logistics issues.

As with many smartphones, improvements to the camera are a key selling point. The Pixel 6 Pro features a new triple rear camera system with a pro-level telephoto lens with 4x optical zoom packed into the camera bar, and an 11 megapixel selfie camera on the front. The company said the sensor captures 150% more light, aiming to bring more vivid color and greater accuracy to photos. The company said it can capture the finest details, including of a starry sky.

The company is adding new security features to the Pixel, too, such as a security hub that puts passwords in one spot and allows you to turn off microphones and cameras (or choose which apps can use them). The effort comes amid continued scrutiny of tech companies and their approach to user privacy.

It's also rolling out increased anti-phishing protection to detect potential risks and suspicious phone calls, text messages, emails and links, flagging them to users. Meanwhile, its new Personal Safety app detects if the user has been in an accident and helps them reach first responders.

Earlier this year, Google showed off a new look for Android 12, featuring bigger buttons, a large clock on the homescreen that changes in size depending on how many notifications appear, and muted pastel colors. It also features series of productivity updates, including an option to hold the power button for Google Assistant to make a phone call or ask for an article to be read out loud, and augmented reality tools in Google Maps.