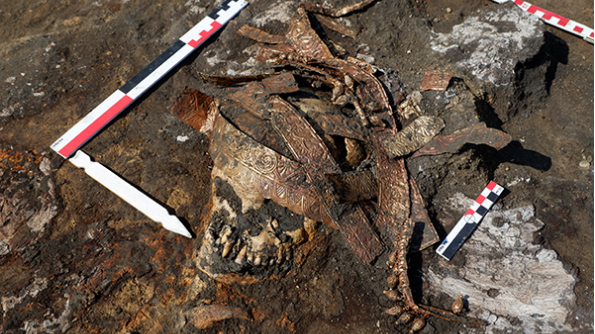 The remains of "Individual No: 1" are seen in this image, including the intricate gold headdress. (Institute of Archeology of the Russian Academy of Sciences)

TORONTO -- Russian archeologists working in the southern region of Ostrogozhsk reported uncovering the remains of several women believed to be Scythian Amazons in burial mounds.

During the 2019 field season, the period of time when it is possible to host archeological digs outdoors, the Don Archeological Expedition from the Institute of Archeology, Russian Academy of Sciences (IA RAS) led by Valery Ivanovich Gulyaev, conducted research and excavation of the 19 burial mounds first discovered in 2000, according to a translated press release.

Work on the burial mounds by the expedition has been ongoing since 2010, and this year a mound labelled as “nine” held the remains of four women, ranging in age and social status. The expedition noted that “nine” had previously been robbed, but only in the northern section.

"The Amazons [were a] common Scythian phenomenon [but] only…during the last decade [has] our expedition…discovered approximately 11 burials of young armed women,” Gulyaev says in the release. “Separate barrows were filled for them and all burial rites which were usually [observed] for men were done for them.”

However, Gulyaev said this was the first time they had come across a burial with four Amazons that had such a difference in age range.

Two sets of remains were found in one part of the mound -- one woman approximately 20 to 25 years old, the other a teenager 12 to 13 years old -- with “more than 30 iron arrowheads, an iron hook shaped in the form of a bird, horse harness elements, iron hooks for suspending reins, iron knives, fragments of molded vessels [and] numerous animal bones were found among the inventory,” the IA RAS website states.

The expedition dated the uncovered vessels from the second to third-quarter of the 4th century BC.

These finds suggest that the women buried there were “Amazons, women-warriors whose institution was in the Scythian epoch among Iranian nomadic and semi nomadic tribes of Eastern Europe,” the release says.

More remains were discovered in the southern and western section of the mound, with “the deceased laid out on wooden lodges covered with grass litter [sic] their heads lay on earthen ‘pillows’ also covered in grass.”

The first woman referred to as “Individual No.1” on the website, was approximately 40 to 50 years old and was buried with an intricate headpiece that consisted of “stamped gold plates with floral ornaments” and “rims with amphora-shaped pendants.” The expedition noted that headpieces like that were referred to as “Calafs” or “Calathos” and had been found “only in the “richest ‘royal’ barrows of Scythia.”

The press release noted that finding the older woman's remains was special as the life expectancy of a Scythian woman during that time was 30 to 35 years old.

The second woman referred to as “Individual No: 2” on the website was younger and approximately 30 to 35 years old. She was buried in the so-called “pose of a horseman,” with bow-legged, spread legs.

Citing anthropological research, the press release says that to be buried in such a symbolic position, “the tendons of her legs had been cut.”

Under her left shoulder and to the left of the “horsewoman,” was a bronze mirror, two spears and a bracelet made of glass beads. At her feet were two vessels – a molded incense burner and a black-lacquered one handed “kantharos,” a cup used to drink wine and for use in rituals and offerings dated to the second-quarter of the 4th century BC.

The IA RAS website called burial mound nine a “unique discovery” as the “overwhelming majority” of Scythian burial mounds in the region have been robbed completely.