'You cannot cut your way to prosperity': Trudeau rallies Liberal candidates in Ottawa 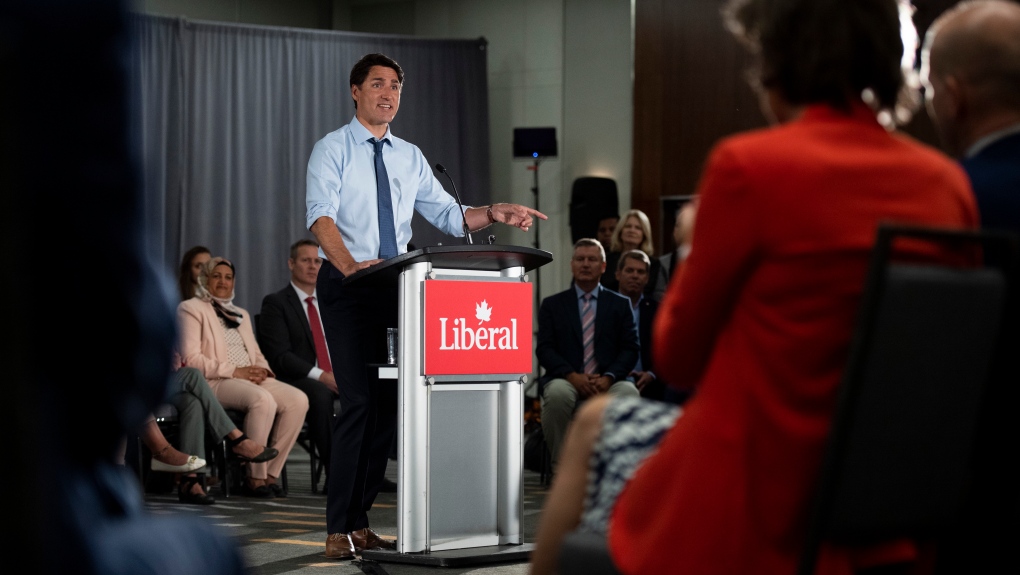 OTTAWA — With 82 days until the federal election date, Prime Minister Justin Trudeau rallied his candidates at a training session, framing the coming campaign as a choice between "cuts and austerity, or investing in Canadians."

In a speech largely seen as setting the Liberal tone for the election, Trudeau said the middle class "can't afford" another Doug Ford, equating federal Conservative Leader Andrew Scheer to the PC Premier of Ontario.

"On the campaign trail, conservative politicians love to say they are 'for the people' but we all know too well what happens once they're in office," Trudeau said, referencing Ford's recent campaign slogan.

"We've seen repeatedly just how far they're willing to go to help the wealthiest few, how quickly they’ll make cuts to public health, cuts to municipalities… cuts to education, cuts to the services Canadian rely on most because they refuse to understand that you cannot cut your way to prosperity."

Trudeau, only naming Scheer directly in French, said that it's on every candidate to make that case in the months ahead.

In an emailed statement, Scheer's press secretary said it's Trudeau's "endless deficits that threaten the public services that Canadians depend on." He said the reason Scheer is committing to balancing the budget is to "stop spending billions on debt interest and instead spend it on Canadians."

Trudeau began his speech with an anecdote about a single mom in a small Ontario town, and how the Liberal's Canada Child Benefit has helped her, not only by assisting her buy farmer’s market produce, but by helping her get out of an abusive relationship.

"The things we've done over the past four years have had a measureable impact on all Canadians," Trudeau said, offering a glimpse at what will likely be similar lines and anecdotes to come.

"Each of you are here in this room because… You want to make a difference in your community I know this, because that's why I'm here too," Trudeau continued, encouraging his team to knock on as many doors, and talk with as many constituents as they can.

He also implored his candidates to stay out of the mudslinging and "politics of fear and division," he said will be coming from the Conservatives and other special interest groups.

Trudeau spoke with a backdrop of largely new candidates looking to claim currently un-held opponent’s ridings. Among them: Olympian Adam van Koeverden who is looking to outseat Conservative deputy leader Lisa Raitt; environmentalist Steven Guilbeaut who wants to take a Quebec riding currently held by an NDP MP that's not running again; and Alberta hopeful Amy Bronson who will be taking on Conservative MP Rachael Harder.

Just over 200 candidates are in Ottawa for a two-day "college" to receive training on various aspects of running a campaign, and to meet and hear tips from incumbent MPs. The Liberal Party has also rolled out a new online training system with guides to hundreds of aspects of campaigning, such as how to canvass, how to organize advanced polls, and best practices for candidates biographies on their campaign webpages.

The hope is the concentrated sessions set up the Liberal team to hit the ground running for the rest of the summer.

Candidates speaking with reporters following Trudeau's remarks expressed optimism about their prospects and preparedness on the campaign trail.

"Feeling a little more weight today when you think deeply about the responsibility that you carry on behalf of Canadians, but very exciting," said new candidate and University of British Columbia professor Mary Ann Murphy. She's running in a currently Conservative-held British Columbia riding.

Here’s the view inside the room where the PM will be speaking. Those are almost all new MPs behind the podium. Candidates told to stand and cheer when Trudeau enters. #cdnpoli #lpc pic.twitter.com/ZffgXl3uNl

Navdeep Bains, who has added campaign responsibilities getting things going says that the Liberals need to knock on more doors than ever before.

Tweets may now come out of order due to spotty reception, but Trudeau is speaking now about the impact of the CCB on a single mom who was in an abusive relationship. Says it’s people like this that are the reason all candidates are here and running. #cdnpoli #LPC

Trudeau says we know what happens when governments who say they are ‘for the people’ (a Ford reference) get into office. You cannot cut your way to prosperity, he says to applause. #cdnpoli #onpoli

Canadians will have a choice- cuts or prosperity, and up to everyone in this room to share that message, Trudeau says, adds that Canadians can’t afford another Doug Ford.

Canadians will have a choice- cuts or prosperity, and up to everyone in this room to share that message, Trudeau says, adds that Canadians can’t afford another Doug Ford.

The election hasn’t started but you’re already seeing misinformation, third party attacks, that’s what happens when they don’t have a plan: try to drag us into the mud but we won’t join them, Trudeau says. #cdnpoli #lpc

Remember when the attacks are rolling in, when the Conservatives choose politics of fear and division, we double down on supporting our communities, says Trudeau.

When you’re running for the first time, you think you know what you are signing up for, but campaigns never turn out quite the way you expect them to, he says, adding he remembers holding a clipboard, going door to door.

Politics is about people, not horse race polls or statistical models, people, knocking on doors and having coffee with constituents, not just how you win elections but how we move the country forward, Trudeau says.

Media being ushered out but it looks lien they are setting up for a townhall-style confab with the team now.

Here was the scene at the end of his remarks. #cdnpoli #lpc pic.twitter.com/F5Ogqh1tO5