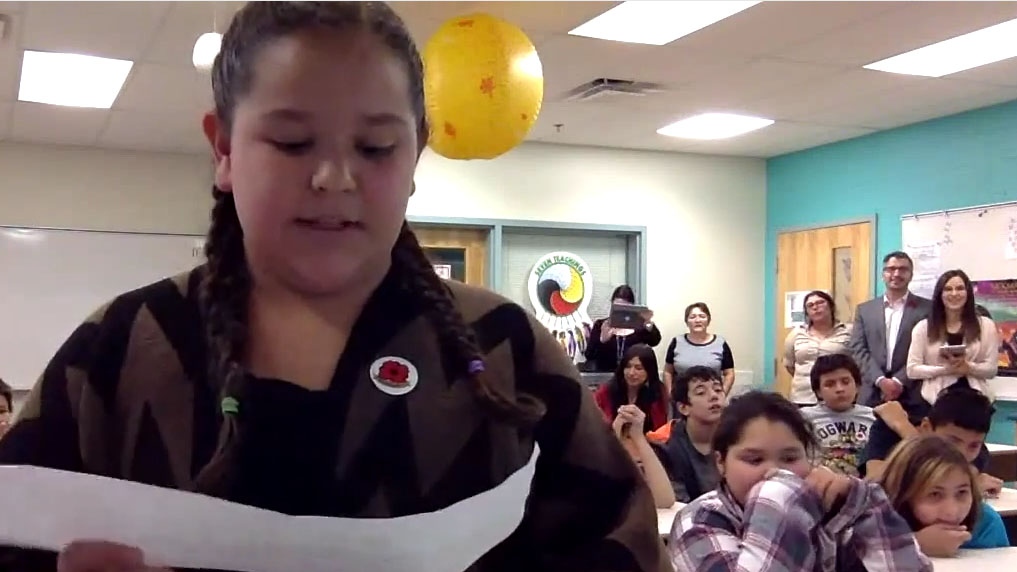 Justin Trudeau, a former teacher, spent part of his first day as prime minister answering the questions of students at five schools across the country, while more than 1,000 people followed along online.

Trudeau – who symbolically awarded himself the portfolio of youth on Wednesday -- started the Google Hangout by saying he intends to engage younger people in the political process and that politics should not be about “speeches,” but about a “dialogue.”

In his first answer, it was clear Trudeau just came off a long election campaign, where reporters were trying to knock him off message. He didn’t offer any specifics Wednesday when asked by a girl from Tusarvik School in Repulse Bay, Nunavut, “what he knows about Inuit culture.”

Trudeau instead responded he has a “love for the North” and has visited many times. “The fact is, Canada is a country that needs to do a better job of giving opportunities and support to people who live in the North,” he added.

Next came a question in French on immigration from a boy at Winnipeg’s Ecole Romeo-Dallaire. Trudeau said Canada is a strong country because of its differences, noting he is aware of the financial barriers some immigrants face.

Next, the Prime Minister was grilled by a young woman at Lawrence Heights Middle School in Toronto about his plan to lower taxes for middle-class Canadians. She wanted to know if it would it help end poverty for “the lower classes” and “people on the streets?”

Trudeau answered that his “more generous” child benefit cheques will “lift 315,000 kids out of poverty” and that he is committed to “investing in social housing and shelters” and a “housing-first strategy to combat homelessness.”

Next, he was asked by a boy at Ecole du Dome in Gatineau, Que., about his promise to make Parks Canada admission free in 2017. He said he is committed to the plan.

Finally, an Aboriginal student at Membertou Elementary School in Sydney, N.S., asked what the Prime Minister enjoyed most about teaching, and how he can use those skills while serving in the country’s top office.

Trudeau said being a teacher allowed him to “understand complex issues and break them down in a way that individuals can understand and be empowered by.”

“It’s not just about having answers, it’s about making sure we’re giving the tools to citizens to be able to create answers and to succeed,” Trudeau went on.

“A good teacher is someone with as many questions as they have answers and who listens as much as they speak,” he said, adding a “good politician” does the same.

“That, for me, is what I’m going to try and do and focus on doing as a prime minister.”