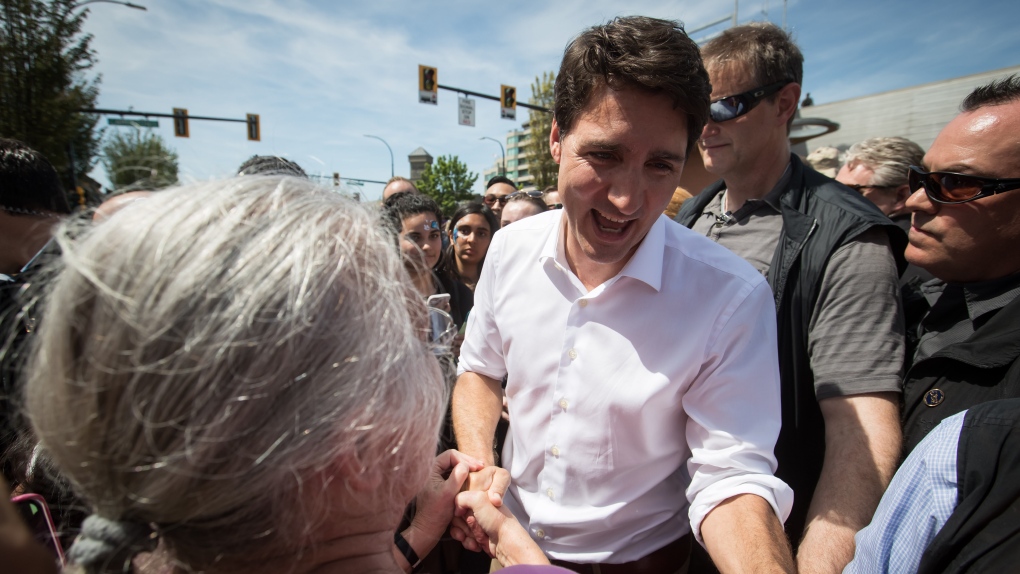 Prime Minister Justin Trudeau greets people during a visit to the Hats Off Day community event in Burnaby, B.C., on Saturday June 1, 2019. THE CANADIAN PRESS/Darryl Dyck

Concerns, questions and frustrations from Canadians can all find a platform on the government's e-petition site, which – provided one gets the wording up to snuff and can convince a member of Parliament to sponsor one's petition – allows citizens to open up an issue for the endorsement of other Canadians.

If the petition gets more than 500 signatures, the government is forced to issue an official response within 45 calendar days.

Everything from a request for Canada to label Putin a war criminal to a call to ban cartoons on products such as cereal boxes have graced the pages of the e-petition portal. While some e-petitions flounder, others get thousands of signatures – providing a peek at the public’s pulse when it comes to issues on Canadians' minds.

CTV News has combed through the e-petitions from this parliamentary session to find out which five e-petitions convinced the most Canadians to sign their name – and to look at what the government had to say in response.

Disclaimer: e-petitions aren't necessarily a reflection of the views of the politician who sponsored it, as politicians generally sponsor any e-petition brought forward by their constituents. The popularity of an e-petition also isn't necessarily an indicator of broad public support, as factors including social media and news coverage can bloat the number of signatures.

#5: Canadian Charter of Rights and Freedoms and Sharia law

Derrick James from Winnipeg brought forward the fifth most popular e-petition on the parliamentary petition portal in March 2017. The petition calls on the government to amend the Constitution Act to state that "Sharia law or separate Sharia family courts will never have a place in the Canadian Justice System."

"Differential justice based on an individual's religion is prejudicial and preferential, therefore, an amendment to the Constitution Act of 1982 would ease the minds of all Canadians and ensure equal treatment for everyone under the Criminal Code of Canada," the e-petition argues.

More than half of the signatories were residents of either Ontario or Alberta.

The government tabled its official response to the petition in November, 2017.

"The Charter ensures that every individual is equal before and under the law and has the right to the equal protection and equal benefit of the law without discrimination based on religion and other grounds. Thus the Charter's rights and freedoms preserve a secular, multicultural, and democratic society with a commitment to dignity, diversity, equality, and human rights," the response reads.

#4: Immigration and the UN migration compact

George Browne from Montreal River Harbour, Ont. initiated this e-petition in October last year. It calls on the government to withdraw from the United Nations' Global Compact for Safe, Orderly and Regular Migration – a non-legally binding agreement that Canada and 151 other countries voted in favour of in December.

The compact lays out best practices for all aspects of immigration on a global scale in an effort to make the process smoother and safer for all involved. Five countries opposed the agreement, including the United States.

The petition argues that "the maintenance of our borders and limited merit-based immigration are essential to our rights and wellbeing" and identifies that the United States, Poland, Hungary and Austria withdrew from the pact "citing its threats to their sovereignty, peace, order and good governance."

The e-petition had over 20,000 supporters in Ontario, and over 10,000 apiece in Alberta, British Columbia and Quebec.

The government's official response to the petition notes that the compact does not pose any threat to Canadian sovereignty.

"The text is not legally binding and says clearly that state sovereignty will not be affected… Canada and Canadians can only benefit from other countries improving their own migration management to deter irregular migration and provide pathways for those who want to migrate regularly. Canada will continue to share best practices and participate in international and multilateral fora to contribute to these efforts," the response reads.

Samer Majzoub from Pierrefonds, Que. was the individual who, in June 2016, put forward the third-most popular e-petition found amid the pages of the e-petition portal. Majzoub called on the government to join Canadians "in recognizing that extremist individuals do not represent the religion of Islam, and in condemning all forms of Islamophobia."

The e-petition notes that 1.5 billion people worldwide practice Islam, adding that Muslims have contributed and continue to contribute positively to the development of human civilization since its founding over 1400 years ago.

"Recently an infinitesimally small number of extremist individuals have conducted terrorist activities while claiming to speak for the religion of Islam. Their actions have been used as a pretext for a notable rise of anti-Muslim sentiments in Canada," the petition says.

"They in no way represent the religion, the beliefs and the desire of Muslims to co-exist in peace with all peoples of the world."

Over 40,000 of the e-petition's supporters come from Ontario, while another 12,000 come from Quebec. Alberta and B.C. had thousands of signatories among their residents as well.

The government wrote an involved response to the e-petition, outlining the many contributions of the Canadian Muslim community as well as the importance of fostering social cohesion through educating the public on Islamic history.

"The Government of Canada condemns all forms of racism and discrimination, including Islamophobia," the response says.

Ryan Slingerland from Coalhurst, Alta. crafted the e-petition that won him the support of enough Canadians to make his e-petition the second-most-signed on the e-petition website during this parliament's tenure. The e-petition, which Slingerland put forward in March of last year, calls on the feds to "scrap Bill C-71, An Act to amend certain Acts and Regulations in relation to firearms, and to instead devote greater resources to policing in Canada."

Bill C-71 is the government's new firearms law, Bill C-71, which will enforce – among other things – more stringent bookkeeping and background checks relating to gun acquisition as well as changes to licensing requirements.

The petition, which was put forward before the bill became law, asserts that the law "does nothing to tackle firearms violence, but rather adds further red-tape on law abiding firearms owners."

It also accuses the law of bringing back the long-gun registry and says it "does not provide the resources to frontline police forces to tackle the true source of firearms violence: gangs and organized criminal enterprises."

The government response points out that they did provide funds to combat gun-related violence and gang activities, an effort which it says includes "supporting law enforcement and community-led projects focused on prevention."

It also points to the fact that the bill was amended to ensure that nothing in the Firearms Act would be construed "so as to permit or require the registration of non-restricted firearms."

"To keep communities safe, the Government is strengthening Canada's firearms laws in a common-sense, focused and effective way," the response reads.

The person behind the most popular e-petition of the term – which blew the second-most signed e-petition out of the water by over 40,000 signatures – was Jonathan Cassels from Kitchener, Ont. He pitched the petition in November 2016, and called on the government to do four things.

First, he called on the government to declare its "on-going commitment to ensuring the 2015 election be the last Federal Canadian election under the First Past The Post system." He then asks that the government outline the proposals for reform, consult the public on proposals, and "outline a proposed timeline for the introduction of an electoral reform bill before the House of Commons, detailing the proposed timeline until passage into law."

The e-petition received tens of thousands of signatures from Ontario, British Columbia, Alberta and Quebec residents.

The government had made electoral reform a key promise in its 2015 electoral campaign, but later backed down on the idea in February 2017. At the time, Democratic Institutions Minister Karina Gould told reporters it had "become evident that the broad support needed among Canadians for a change of this magnitude does not exist."

The message was echoed word-for-word in the government's response to the petition, published a month after their decision to abandon electoral reform came out.

It also identified that, as a result of the lack of consensus, the democratic institutions minister's mandate letter changed.

"Changing the electoral system is not in the Minister's mandate," the response said.

"The Government of Canada will continue to work to strengthen and protect our democratic institutions and ensure they represent the values of Canadians. The Government looks forward to the important work ahead."