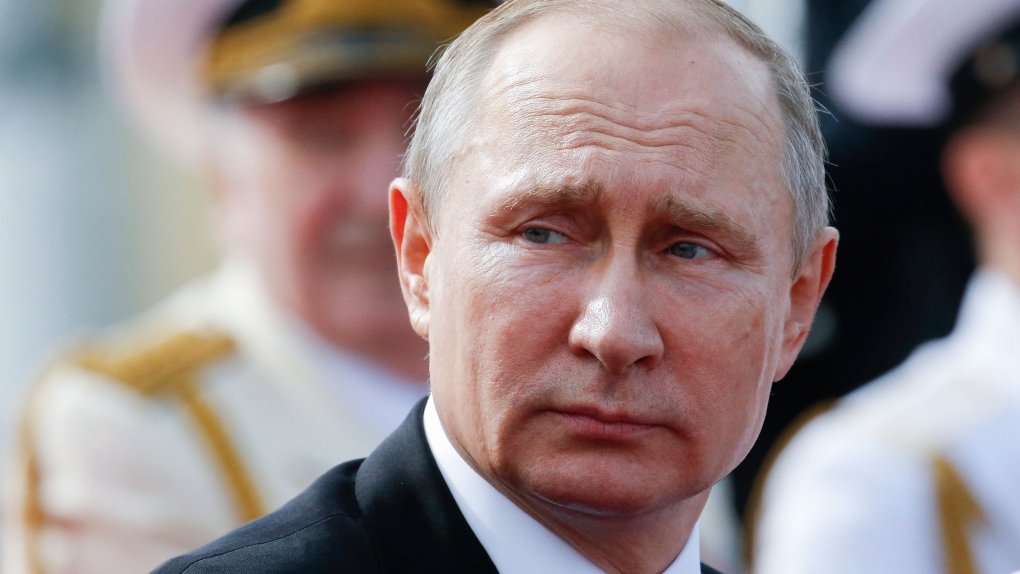 OTTAWA -- The government has rejected a Conservative MP's call to declare Russian President Vladimir Putin a war criminal and refer him to The Hague-based International Criminal Court.

In its official response to an e-petition on Parliament's website, tabled Jan. 28, the government ignored the request to label Putin a war criminal and instead emphasized concern about "Russian actions that undermine the rules-based international order."

The response instead lists the government's numerous condemnations of various Russian actions and its use of the G7 Presidency to push Russia to follow international obligations.

This falls short of the e-petition's aspirations, which ask the government "to declare Putin a War Criminal and refer him to the International Criminal Tribunal in The Hague for crimes of aggression, war crimes, crimes against humanity and for sponsoring terrorism."

Conservative MP James Bezan sponsored the petition, an action which opened it to be signed by over 10,000 people. While MPs do not always necessarily support the content of the e-petitions they sponsor, Bezan told CTV News at the time that he stands by its content.

"We do need to send a strong message to Putin that the world is watching, that his actions are considered war crimes, and also send a message to world leaders… that we cannot appease a dictator," Bezan said.

He said he was unsatisfied with the recent response, which did not name Putin once.

"I thought it was a very shallow response. All they did was reiterate their own talking points about what Canada is doing in defense of Ukraine about Russian aggression, but never talked about the whole issue of Vladimir Putin - who is the primary reason that we have the illegal occupation of Crimea and the war in Donbass," Bezan said.

"Putin has to finally take the initiative to actually bring about peace rather than always bring conflict."

Bezan was banned from Russia alongside 12 other lawmakers – including Conservative Leader Andrew Scheer and Foreign Affairs Minister Chrystia Freeland – four years ago. The move was in retaliation for Canadian sanctions over Ukraine.

Crimea's annexation is one of the many Russian actions the petition lists to back up its assertion that Putin should be labelled a war criminal. The petition also details allegations of Putin’s abetment in the bombing of civilians in Crimea, the killing of Russian journalists, and in the shooting down of the flight MH-17 over Ukraine, killing 298 civilians.

Russia has publicly rejected claims of its involvement in the MH-17 plane crash and Russian officials have been outspoken in their belief that Crimea is an inseparable part of Russia.

"I think all too often we've been too careful to avoid linking Putin directly to the action of the Russian Federation and their proxies but we all know that there's only one conductor on this train, or of this orchestra, either way you want to look at it, and that’s President Putin himself," Bezan said.

Freeland’s parliamentary secretary Andrew Leslie stopped short of supporting Bezan's cause, but instead criticized Putin in a statement provided to CTV News.

"Vladimir Putin has led Russia since 2000, and is responsible for every one of Russia's unacceptable actions that have undermined the international rules-based order since then. That is a message that we have said directly to Vladimir Putin," Leslie said.

The petition has garnered some praise from high-profile critics of Russia.

Bill Browder, an American-born businessman and outspoken critic of the Russian president, commended Bezan’s effort to get Putin before The Hague.

"I think it’s totally appropriate -- everybody should be making the same petitions of other countries and good for him for being a leader in this area," Browder told CTV News at the time the petition was introduced in July.

"Putin is eventually going to end up in The Hague -- if he doesn’t perish before then," Browder said.