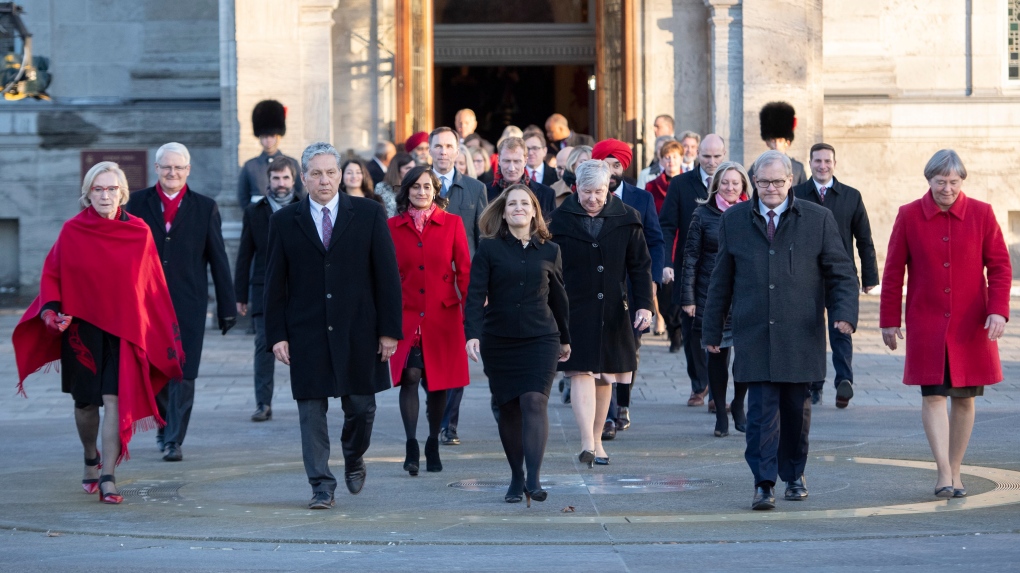 Members of the federal cabinet walk through the forecourt at Rideau Hall after a swearing in ceremony in Ottawa, on Wednesday, Nov. 20, 2019. (THE CANADIAN PRESS/Justin Tang)

OTTAWA -- Prime Minister Justin Trudeau has released the revamped mandate letters for each of his 37 cabinet ministers. Consistent with the priorities carved out by the Liberals during the campaign and further built in the throne speech, Trudeau is putting an emphasis on collaboration, both across the aisle and amongst ministers.

Tackling climate change, building on social programs and affordability initiatives, and addressing the regional tensions that have been exposed in the aftermath of the campaign are all noted in the new marching orders for ministers.

Among the highlights: Deputy Prime Minister and Intergovernmental Affairs Minister Chrystia Freeland will lead on the federal government’s relationships with the provinces and territories first by hosting with Trudeau a First Ministers’ Meeting in early 2020.

Finance Minister Bill Morneau has been asked to keep the federal debt in check with the size of the Canadian economy; Justice Minister David Lametti and Crown-Indigenous Relations Minister Carolyn Bennett will be taking on legislation to implement the United Nations Declaration on the Rights of Indigenous Peoples by the end of 2020; and Canadian Heritage Minister Steven Guilbeault will take on regulating social media giants.

As well, Environment Minister Jonathan Wilkinson will be bringing in new greenhouse gas reduction measures to see Canada meet its climate change targets; Health Minister Patty Hajdu will tackle the growing concerns around teens vaping; and President of the Queen's Privy Council for Canada Dominic LeBlanc will take on overseeing Canadian election and disinformation issues in light of there no longer being a democratic institutions minister.

The public issuing of the mandate letters continues a practice started by Trudeau in 2015. These new marching orders come just under a month after the prime minister unveiled his expanded cabinet.

“It is more important than ever to unite around our shared purpose, as we build a stronger, more inclusive, and more resilient country. That is exactly what our team will do, finding common ground and delivering real, positive results for all Canadians,” Trudeau said in a statement announcing the letters’ release.

“These mandate letters outline our commitment to keep government open, transparent, and accountable, and to continue moving forward for Canadians from coast to coast to coast,” the prime minister said.

As was the case in 2015, each minister’s specific responsibilities are listed under an identical preamble for each member of cabinet, referencing their plan to build on the platform commitments they promised in the last Parliament. Trudeau also tells each of his ministers that they must be accountable for their leadership styles and ability to work across the aisle.