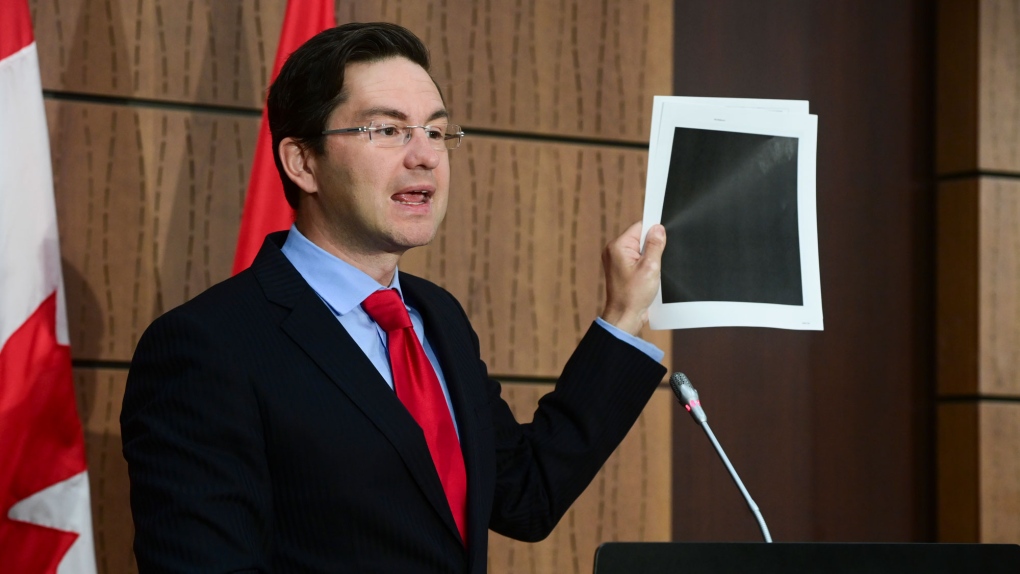 Conservative MP Pierre Poilievre holds up redacted documents during a press conference on Parliament Hill in Ottawa on Wednesday, Aug. 19, 2020. The documents were tabled by the Government at the House of Commons Finance Committee. THE CANADIAN PRESS/Sean Kilpatrick

OTTAWA -- Opposition members shut down a parliamentary committee hearing Wednesday after the Liberal government once again refused to let a political aide appear to answer questions about the now-dead deal with WE Charity.

Members of the House of Commons' ethics committee had asked Amitpal Singh, a senior adviser to Finance Minister Chrystia Freeland, to testify after a majority of MPs passed a Conservative-sponsored motion to that effect last week.

The motion allowed Prime Minister Justin Trudeau to appear before the committee in his place.

But the Liberal government, which has ordered political staff not to appear before committees, deployed Associate Finance Minister Mona Fortier to instead appear for Singh, who worked for Bill Morneau when he was finance minister.

It was the second time a minister appeared instead of a ministerial aide after government House leader Pablo Rodriguez took the place of Trudeau's director of policy earlier this week.

While the committee ultimately decided to hear what Rodriguez had to say on Monday, opposition members refused to do the same with Fortier and instead used their majority to adjourn the meeting after only 20 minutes.

"By blocking witnesses from testifying ... against an order of the House of Commons, the government is devaluing and disrespecting Canada's Parliament," Conservative ethics critic Michael Barrett told the committee before asking that it adjourn.

The motion passed in the House of Commons last Thursday called on Singh, Trudeau policy director Rick Theis and the prime minister's senior adviser, Ben Chin, to appear before the ethics committee to answer questions on the WE deal.

Trudeau was invited to attend on their behalf if the government wanted.

The government has in turn accused opposition members of trying to intimidate and mistreat non-elected political staff and argued that ministers are ultimately responsible for those who work in their offices.

Rodriguez and Liberal committee members have also accused the opposition of trying to score cheap political points by dragging out the ethics committee's study on WE, suggesting there was little more to learn about how the deal came together.

Prior to the committee adjourning, Bloc Quebecois MP Rheal Fortin accused the government in French of "blatantly defying" the House of Commons by ignoring the motion calling for senior political staff or Trudeau to appear.

"I always thought that Canada was supposed to be a democratic country where decisions were taken democratically and where a decision by the House held some value," he said. "And yet members of the government side are blatantly defying the House."

The sole-sourced deal with WE was announced last spring and would have seen the Toronto-based youth organization paid $43.5 million to run the Canada Student Services Grant program, which was designed to reward students who volunteered during the COVID-19 pandemic.

WE later backed out of the agreement following questions and concerns about its close ties to members of the prime minister's family, before the $543-million program was cancelled entirely.

The Liberals and WE co-founders Craig and Marc Kielburger have insisted that it was non-partisan civil servants who came up with the idea of having the organization run the grant program.

But the Conservatives have held up some of the thousands of email exchanges and other documents released by the government in August, after Trudeau testified, as evidence the arrangement was directed by the Liberals.

The ethics commissioner is currently investigating both Trudeau and Morneau, who abruptly resigned as finance minister and left federal politics in August, for potential conflicts of interest in relation to the deal.

This report by The Canadian Press was first published March 31, 2021.