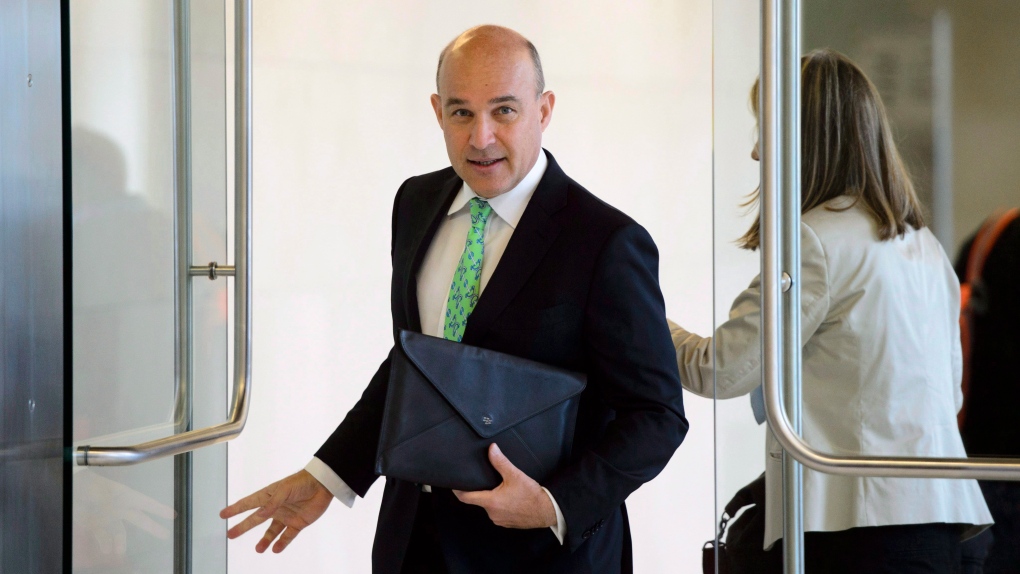 Jim Balsillie, Council of Canadian Innovators, arrives to appear as a witness at a Commons privacy and ethics committee in Ottawa on Thursday, May 10, 2018, hearing witnesses on the breach of personal information involving Cambridge Analytica and Facebook. THE CANADIAN PRESS/Sean Kilpatrick

OTTAWA -- The three major federal political parties are being looked into by Canada’s competition regulator over their largely unregulated harvesting and use of Canadians’ personal information.

In response to a complaint filed by the Centre for Digital Rights, the Competition Bureau of Canada has “commenced an inquiry” into what the digital rights group describes as “big data mass surveillance and harvesting techniques,” and “large scale misuse of big data and targeted digital advertising” conducted by the parties.

The Centre was informed just days after the October federal election that an investigation had been launched. The Competition Bureau is the law enforcement agency that administers the Competition Act.

According to a copy of a letter from the Bureau provided to CTV News by the Centre, the conduct of the Liberal, Conservative and New Democratic parties are all being reviewed.

Senior Communications Advisor with the Competition Bureau Marie-Christine Vézina confirmed to CTV News that the Bureau is “looking into allegations that the three political parties have made misleading statements about the manner in which they collect, use and/or disclose the personal information of Canadians.”

At this stage in the investigation the bureau is gathering evidence to determine the facts and says “there is no conclusion of wrongdoing at this time.”

Founded by former BlackBerry CEO Jim Balsillie, the Centre sent this submission as one of five different formal complaints about political parties’ access and use of this information in light of the Cambridge Analytica scandal. The others were sent to the federal privacy commissioner, the information and privacy commissioner of B.C., the CRTC, and the federal elections commissioner. The submissions remain under review but no other probes have been launched.

In its official complaint to the Competition Bureau the Centre called for “The deceptive representations of Facebook and each of the Federal Political Parties involving the collection, use and disclosure of Canadians' personal information,” arguing that these practices “undermine the trust of Canadian consumers in the marketplace of goods, services and ideas.”

In an interview, lead lawyer for the Centre for Digital Rights Bill Hearn told CTV News he was “delighted but a little surprised” that the Bureau was the first out of the gate to investigate.

“These laws can be applied to not constrain political parties’ ability to communicate, but to regulate it in a way that protects the public interest and Canadians’ privacy and data rights,” Hearn said.

The fall federal election drew renewed attention to the almost unfettered and unregulated access federal political parties have to Canadian’s data. As part of a series of elections law changes in the last Parliament, the Liberals required political parties to post their privacy policies online, but stopped short of subjecting parties to tougher privacy rules and oversight for the information they harvest from the electorate, despite calls to do so.

Concerns have been raised about people’s ability to see what information a party has collected about them, how that data is being used and secured, and the lacking requirement for Canadians to be informed if a privacy breach has occurred of a political party’s database.

In its complaint the Centre alleges that these parties’ privacy policies are “false or misleading” because they do not fully divulge the scope and range of personal information collected, or how it is used to “develop voter profiles and deploy targeted digital advertising for the purpose of influencing Canadians' voting behaviour.”

Hearn said that should the Bureau find that the political parties are in violation of a false or misleading advertising provision, they could face financial penalties up to $10 million, though it is not their intention to penalize these parties, rather convince them to change their ways and have these parties finally be subject to more oversight and regulation.

In December the Centre also made a submission to Innovation, Science and Economic Development Canada (ISED) advocating for the Personal Information Protection and Electronic Documents Act (PIPEDA) to be amended to include federal political parties.

“This extension of PIPEDA would be recognized as a positive democratic reform, and as addressing a significant lack of trust in the digital world,” reads this submission in part.