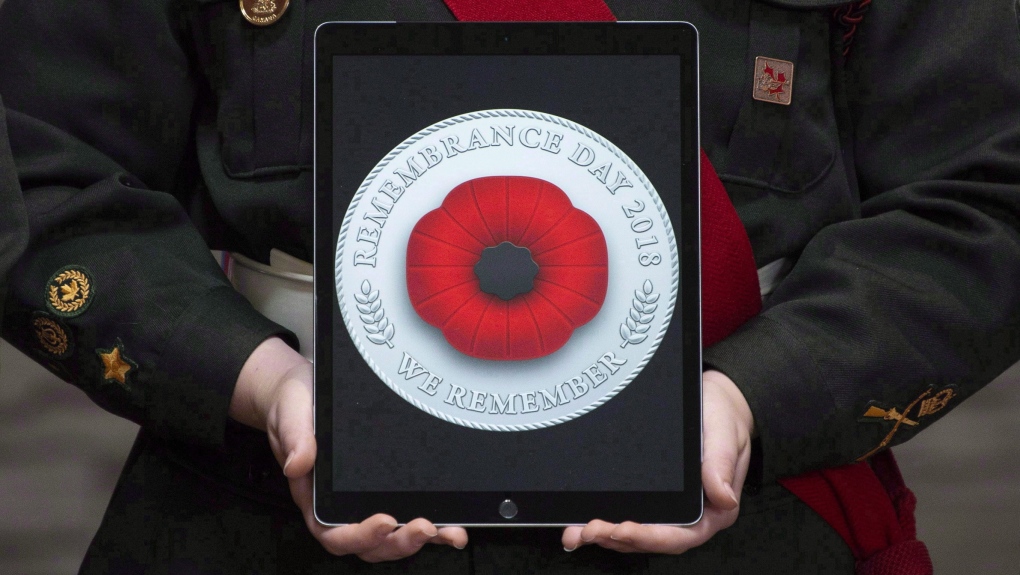 A cadet holds a tablet showing the digital poppy during a ceremony marking the start of the Canadian Legion's Remembrance Day poppies at the Beechwood National Memorial centre Monday, October 22, 2018 in Ottawa.THE CANADIAN PRESS/Adrian Wyld

OTTAWA -- The legacy of the First World War will be omnipresent when Canadians stop on Sunday -- the 100th anniversary of the end of the War to End All Wars -- to pay tribute to those who sacrificed for the country and its way of life.

There will be the red poppies pinned to lapels, and the haunting words of In Flanders Field, penned by Lt.-Col. John McCrae after the Second Battle of Ypres.

There will be the National War Memorial, originally built to commemorate the 60,000 Canadians who died during the war, and Remembrance Day itself, which has been recognized every Nov. 11 -- the day the Great War ended -- since 1931.

Yet the enduring impact is felt in countless other ways as well, many of them subtle -- and not all of them positive, despite the popular refrain that Canada came into its own as a country during the First World War.

That's because while the war ushered in many changes as the country pulled together during those four bloody years in a way it never had before, it also created deep divides and challenges -- some of which remain today.

"The war enhances divisions between French and English, between east and west, between rural and urban. It tends to exacerbate and divide based on income and inequality," says historian Mark Humphries of Wilfrid Laurier University.

"So these are kind of the lasting legacies for Canadians."

No event was more divisive -- or politically transformative -- than the introduction of conscription. It was the issue upon which the December 1917 federal election was fought and broke the country along both linguistic and geographic lines.

French-Canadians were deeply angry at being forced to fight a war they didn't believe in, while many rural Canadians and union workers felt betrayed after the government broke its promise during the election to exempt them and their sons.

Mixed into the equation was a great deal of disillusionment as companies made huge profits off the war, even as average workers struggled with low pay and returning veterans faced difficulty finding work or accessing services and benefits.

The result was a rise in Quebec nationalism -- the first independence motion was introduced in Quebec's national assembly in 1919 -- and the death of the two-party system as new federal and provincial parties espousing progressive agendas were born.

"You had class parties, regional parties, left-wing and right-wing parties, separatist parties," says military author and historian Jack Granatstein, who recently co-curated a new exhibit on the last 100 days of the war at the Canadian War Museum.

"They all took form as a result of the events that took place in the First World War, and we live with them still. There are five or six parties in the House of Commons and we will never again, I suspect, have a two-party system."

The emergence of new political parties was only one change in Ottawa as the federal government also took on a more prominent role in Canadians' lives than ever before -- and in ways that continue today.

That included the introduction of a "temporary" income tax to help pay for the war, which by 1918 had left the government around $2 billion in debt -- not counting the money that would eventually be needed to support the returning veterans.

Both the income tax and veterans' support would foreshadow the federal government's eventual and longstanding role in providing various social services and benefits to Canadians.

"The government that develops in the war, looking primarily after the welfare of soldiers' families, what develops out of this ... is a much stronger state," says University of Toronto historian John English.

"And income tax gave government the funds that allowed it to expand more fully in the social-welfare direction. So income tax in that sense was a very progressive reform and made possible what came afterwards."

Another side effect of the war was the rapid industrialization of Canada's economy. Factories had already started to pop up, but the need to mass produce everything from clothing to artillery shells to aircraft and ships pushed things along faster.

While thousands of women entered the workforce to help at those factories, their numbers largely returned to pre-war levels afterward. More substantially, women -- specifically those related to soldiers -- were allowed to vote in 1917 for the first time.

The reason was quite political: the government believed those women were more likely to support conscription. Yet while the motivations may have been suspect, the long-term impact is now evident.

The result was that despite short-term disillusionment, the war had a great equalizing effect on many aspects of Canadian society, as women got the right to vote, workers demanded better rights and wages and Canadians railed against graft and corruption.

"People were dying for the country and they believed they should come home to a land that was a fairer one, that had better distribution of wealth and that wealth and privilege were not gained by birth but rather by service," English says.

While it didn't happen overnight, English believes there was over the long run "an economic democratizing aspect to the war, and also an overall democratizing element to it."

Many Canadians understand the First World War as the birth of modern Canada, as the country took more ownership over its own affairs and demanded -- and was given -- respect for the price it paid at Vimy, Passchendaele and other battlefields.

But, says Canadian War Museum historian Tim Cook, there is no denying that with the conscription crisis and the schisms it brought, there was a cost to Canada coming into its own as a country.

"It was a war that nearly broke us as we were stepping out onto the world stage. As we are signing the treaty of Versailles, as we are becoming a part of the League of Nations, we are a broken country.

"And the legacy of that war continues with us to this day."