How the 2018 federal budget impacts you 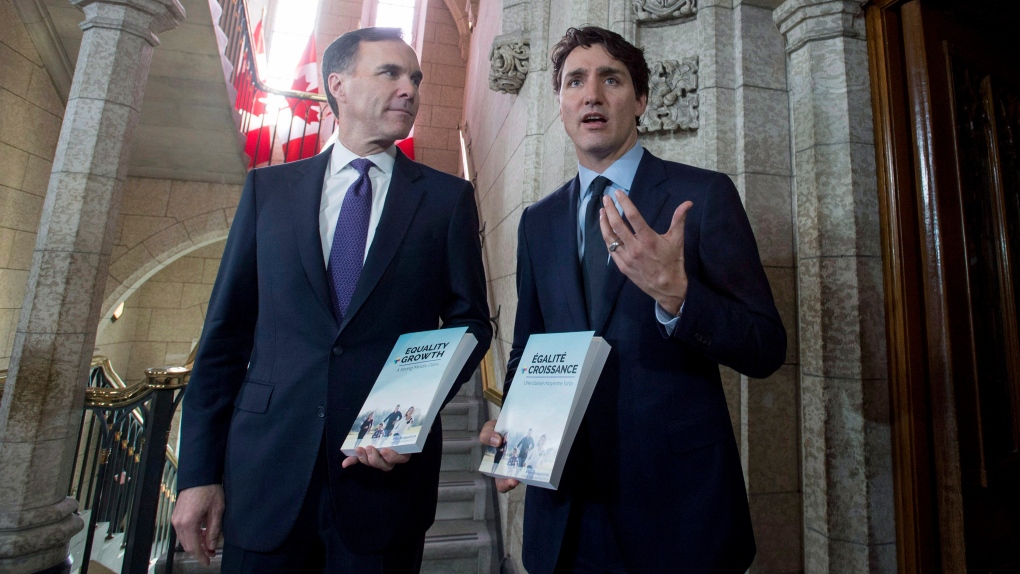 Minister of Finance Bill Morneau walks with Prime Minister Justin Trudeau before tabling the budget in the House of Commons on Parliament Hill in Ottawa on Tuesday, Feb. 27, 2018. THE CANADIAN PRESS/Justin Tang

Federal Finance Minister Bill Morneau’s third budget represents many things to many Canadians. A brisk read is not one of them.

CTVNews.ca distilled Budget 2018’s 367 pages down to highlight some of most significant changes in store for the average Canadian.

Here’s how the 2018 budget could impact you:

The federal budget earmarks $1.2 billion over five years, starting in 2018-19 to introduce a new Employment Insurance Parental Sharing Benefit that will provide five extra weeks of “use it or lose it” EI parental benefits when both parents share the leave.

This option is expected to become available in June 2019 for parents who use the traditional 12 month parental leave program. For couples who opt for the extended parental leave introduced in December 2017 at 33 per cent of earnings for 18 months, the second parent can take up to eight additional weeks.

This benefit of five extra weeks will be available to two-parent families, including adoptive and same-sex couples. Parents can share the 40 weeks in various combinations for a total of 40 weeks under the 12 month program or up to 69 weeks under the extended option.

While this has been well-received as an improvement to the current system, some stakeholder groups, including Canada Without Poverty have noted that it’s “not a stand-in for a program that addresses the intractable childcare costs families in Canada currently experience.”

Budget 2018 unveils a much anticipated tweak to small business tax reform, following significant backlash against the Liberals when the slate of changes were first introduced last year.

Passive income refers to the practice of keeping profit inside a business and investing it in things like stocks or mutual funds, rather than new equipment to improve the business, for example. The government has argued that wealthy professionals are operating as small corporations to grow their personal portfolios at a lower tax rate than average Canadians.

“I don’t know where they get those numbers from,” he told CTV News Channel on Tuesday, following the budget’s release. “We know a lot of doctors, lawyers, accountants, and professionals that will be significantly affected by this. The thing they are forgetting is these business owners often save for retirement inside these companies. That is now going to hinder the ability to do that for some of these professionals.”

The new rules will kick in for tax years starting after 2018.

The government says it’s tacking an extra buck onto a carton of 200 cigarettes, adding about $0.13 cents to the price of a pack -- but that doesn’t include an early inflationary increase.

In the Tax Measures: Supplementary Information document, more details are revealed: the budget would advance inflationary adjustments for tobacco excise duty rates to occur on an annual basis, taking effect April 1 each year, starting in 2019. “Effective the day after Budget Day, tobacco excise duty rates will be adjusted to account for inflation since the last inflationary adjustment in 2014,” the document says.

The budget also bolsters Ottawa's strategy to reduce tobacco-related disease and death with a plan to provide $80.5 million over five years beginning in 2018–2019. Those funds will be deployed to crack down on contraband tobacco products, pay for "targeted actions" to prevent use, and help Canadians kick the habit.

It’s a more generous expansion of the current framework. The government wants to raise benefits by up to $170 per year starting in 2019, and increase the income level at which they are phased out.

Canadians with disabilities facing financial barriers to enter the workforce would also receive an extra $160 per year through the Canada Workers Benefit disability supplement.

Recognizing that a significant number of low-income Canadians do not claim benefits they are entitled to, Budget 2018 aims to allow the Canada Revenue Agency to automatically determine who is eligible.

The government estimates this will extend benefits to an additional 300,000 low-income workers.

The government has already doubled the number of job placements available under the Canada Summer Jobs program and is looking to do it again in 2019-20.

In the 2018 budget, the Liberals are setting aside an additional $448.5 million over five years, starting in 2018–19, for the Youth Employment Strategy that the jobs program is part of. This additional funding will pay for the continued increase of the number of placements.

Right now, 70,000 students a year get work experience and save money for college or university by participating in the Canada Summer Jobs program.

The Canadian Alliance of Student Associations says the to-be-boosted program “provides an excellent roadmap for improving student transitions to the workforce.”

For the women who are part of the 1.2 million federally regulated employees in Canada, your pay could be increased soon.

The federal government is finally moving to establish a proactive pay equity regime aimed at closing the wage gap between men and women. It will apply to any federal employers with 10 or more employees, and will apply to seasonal, temporary, part-time and full-time jobs.

Currently in Canada, women make around 88 cents for every $1 of hourly wages a man earns.

The government estimates this change could reduce the gender wage gap by about 2.7 cents for public servants, and by about 2.6 cents in the federal private sector.

Government commits $4.7B to Indigenous funding in 2018 budget

From birds to belugas, feds boost conservation funding in budget

With billions in new fiscal room, feds chose investments over return to balance