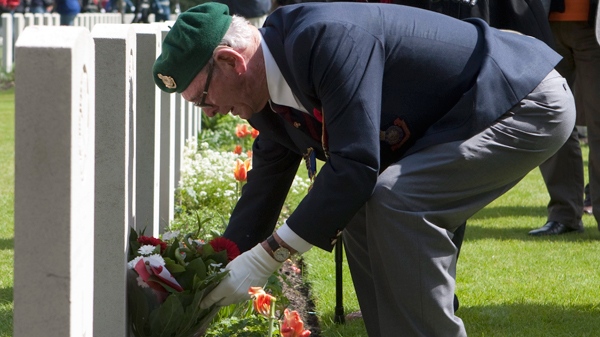 Lance Corporal Kenneth Rowland, from St. Catherines, Ont., places flowers at the grave of his friend following a ceremony at the military cemetary in Bergen op Zoom, The Netherlands, Thursday, May 6, 2010. (Adrian Wyld / THE CANADIAN PRESS)

OTTAWA -- Prime Minister Stephen Harper departs today for an overseas trip to mark the 70th anniversary of the end of the Second World War.

He is slated to join a handful of elderly veterans taking part in one last pilgrimage to the Netherlands, which Canadian troops fought to liberate in the waning days of the campaign in northwestern Europe.

The actual anniversary of VE Day is May 8, and there are elaborate celebrations planned in Britain, including a service involving the Queen at Westminister Abbey.

Canada's celebrations, however, are concentrated in Holland and Harper is slated to be back home before the end of next week.

The First Canadian Army and the Second British Army were spread across the Netherlands and northern Germany when Adolf Hitler's Third Reich finally collapsed.

Different German armies started laying down their weapons piecemeal, starting with their forces in Italy on April 29, 1945 and leading up to the total unconditional surrender on May 7, 1945 in Reims, France.

The war was not officially declared over until the next day.

German Colonel-General Johannes Blaskowitz, the German commander-in-chief in the Netherlands, surrendered to Canadian Lt.-Gen. Charles Foulkes in the Dutch town of Wageningen on May 5.

Foulkes had commanded the 2nd Canadian Division during the D-Day invasion, but was promoted to corp commander by the time the war was winding down.

The federal government is offering $2,000 in travel assistance to encourage vets -- many of them in the late 80s and 90s -- to attend the events in Holland.