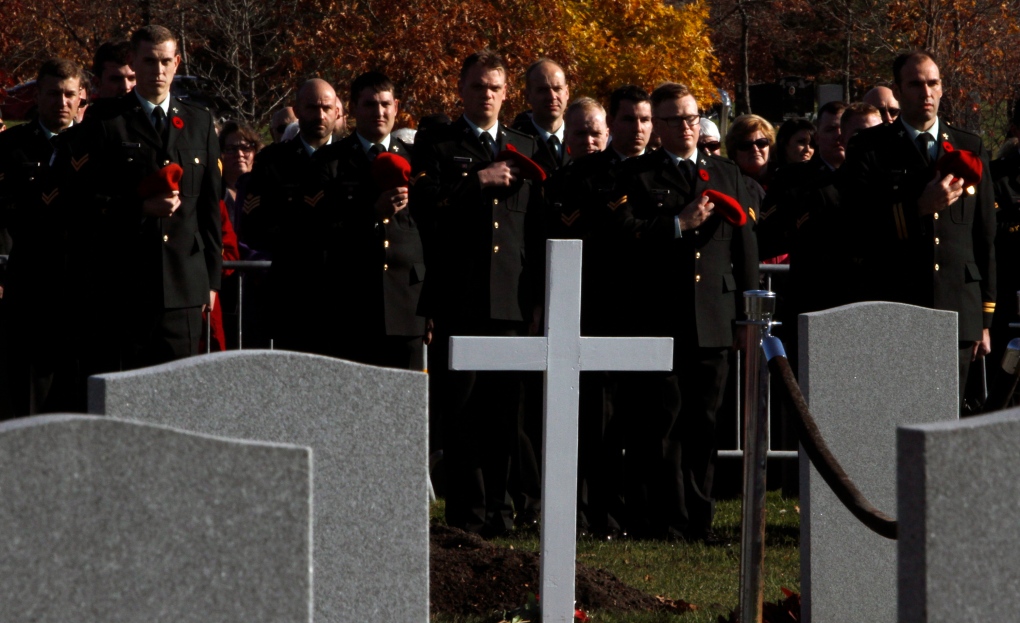 Members of the Honour Guard pause for a moment of silence during the Remembrance Day ceremony at the National Military Cemetery in Ottawa, Tuesday, Nov. 11, 2014 . (Fred Chartrand / THE CANADIAN PRESS)

OTTAWA - An NDP private member's bill meant to formally recognize Remembrance Day as a “legal” holiday appears to be dying a slow, silent death as the sun begins to set on the current session of Parliament.

The Harper government recently asked for more time to study the straightforward, single-clause bill, which comes before a second House of Commons committee Tuesday.

Ontario New Democrat MP Dan Harris, who introduced the proposed legislation, says it's highly unlikely the bill will make it through the House of Commons and the Senate before summer, when Parliament adjourns prior to a fall election.

“It certainly seems like they've hit the brakes hard on this bill,” said Harris, who accused Conservatives of tying it up by asking the veterans affairs committee to study the matter after it had already been reviewed.

“They seem to be doing everything they can to stop it.”

The committee will hear witnesses Tuesday, the vast majority of whom have already testified before the other all-party committee of MPs.

“We've already seen all of the witnesses we wanted to see at (the) heritage (committee), so there's no reason for us not to report back fairly soon” to the House of Commons for final approval, he said.

“By throwing it over to veterans affairs, they've ensured at least another week's delay.”

Harris said he's mystified at how a one-clause bill could need so much study.

The legislation initially had two clauses, but the NDP agreed to remove one for the sake of speeding it through second-reading debate last fall.

At first, the Conservatives opposed the private member's bill, with former veterans minister Julian Fantino speaking against it. But government MPs approached Harris and suggested it could be fast-tracked.

That's what is so puzzling to Harris, who said he wonders if the new delay has anything to do with the Conservatives not wanting to share credit in the face of the veterans community.

The Harper government considers veterans to be its natural constituency and has been desperately trying to rebuild bridges with alienated and angry ex-soldiers upset about benefits policies and Fantino's seeming indifference to their concerns.

But Conservative MP Rick Dykstra, who has been point man for the government, said they have received “significant push-back” from at least three major veterans groups, who are opposed to the idea.

He says Harris did little - or no - consultation, nor was he able to canvas the opinions of provincial school boards.

“They were specifically saying that this is a day, a day of remembrance. It was never meant and never intended to be a holiday,” Dykstra said. “So, we certainly heard that, and it has delayed our process and that was why we sent a piece of the bill to veterans affairs to get some input from them.”

Dykstra says the bill will eventually make it back to the Commons, but whether but lives or dies depends on the house leaders and the scheduling of legislation.

Harris said a lot of people are under the misconception that the proposal means Nov. 11 will automatically become a statutory holiday across the country.

In fact, the power to establish that would remain with the provinces, six of which already deem it a day off.

Harris said since provincial law was changed in Nova Scotia and businesses were told to observe the day, attendance at Remembrance Day services has actually increased.